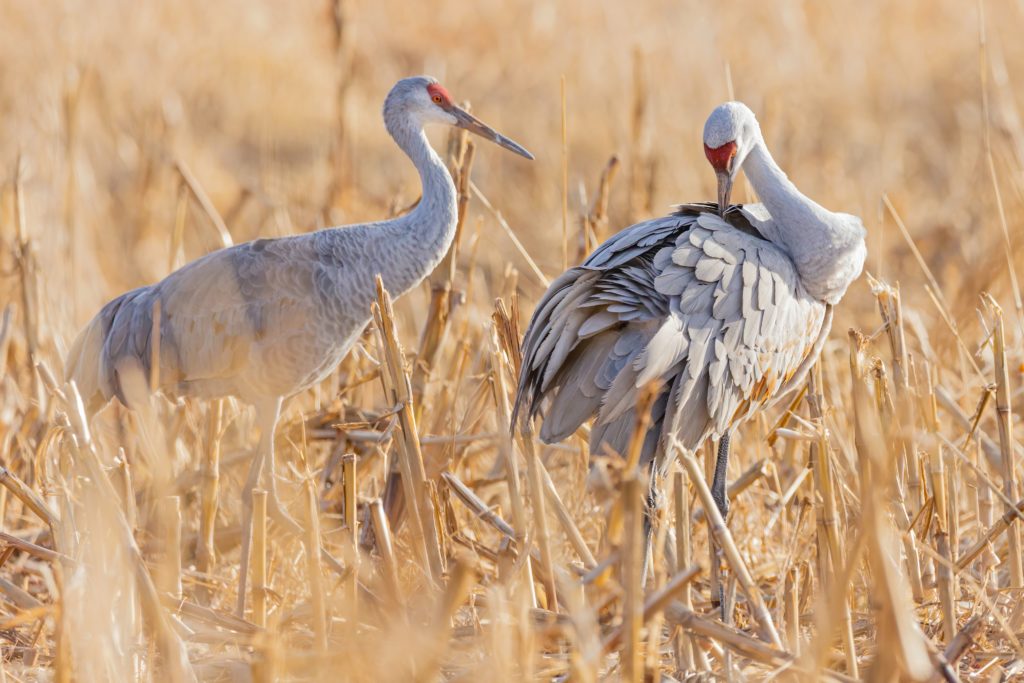 10/13/2021 Update: Tomorrow, the Michigan Natural Resources Commission will hear a presentation from DNR Waterfowl and Wetlands Specialist Barb Avers regarding sandhill cranes in Michigan. If you want to provide comment on sandhill crane management, please email the NRC at nrc@michigan.gov or show up tomorrow to testify at the meeting. The meeting will start at 9 am at the MSU Veterinary Diagnostic Laboratory in East Lansing. Once there, let the NRC assistant know you wish to testify and you will be placed on the agenda for three minutes.

Senate committee members heard testimony March 3 regarding whether or not to recommend the eastern population of sandhill cranes be named a game species.

The resolution will likely be taken up again in a subsequent Senate Natural Resources Committee hearing, and if passed, it will move to the Senate floor for a vote before being transmitted to the NRC.

Resolutions are a non-binding recommendation made by legislators — the passage of the resolution would not institute a sandhill crane hunting season.

“A resolution is absolutely the appropriate course for our legislature to take if they would like to see sandhill cranes listed as a game species,” Trotter said. “The listing of game species is an authority provided to the NRC under the 2014 Scientific Fish and Wildlife Conservation Act, and MUCC supports the process and thorough scientific review of all data by the NRC to ensure proper scientific management of game species.”

Julie Baker, director of the Michigan Songbird Protection Coalition, said during her testimony that there are no scientific facts or justification to support a “recreational shooting season” of sandhill cranes and that her members “contribute significantly” to conservation efforts in Michigan.

Michigan hunters directly contribute more than $40 million annually through license sales, which is leveraged with federal and non-profit funding from a variety of hunter-led organizations, to manage and improve wildlife habitats benefitting all species — game and nongame. Nine dollars of every $12 waterfowl license required to hunt waterfowl in Michigan is dedicated to restoring and enhancing wetland habitats, which has been critical to sandhill crane recovery.

Much of the testimony heard Wednesday was based on emotion, not fact, Trotter said.

“Pulling on heartstrings and appealing to folks’ emotions has become a common tool by anti-hunters masquerading as conservation advocates,” Trotter said. “Science needs to dictate population management tactics, and Michigan citizens deserve a thorough and timely review of the current science by the Department of Natural Resources and NRC.”

Sandhill cranes are considered a game species at the federal level, and there are currently hunting seasons for four sandhill crane subpopulations: the lower Colorado River valley, mid-continent, eastern (the population group in Michigan) and Rocky Mountain.

Given sandhill cranes’ migratory status, management decisions rely on flyway councils, which are comprised of state and provincial wildlife agencies, tasked with working cooperatively with the USFWS to set harvest regulations and develop management plans for hunted migratory bird species.

In 2010, a coalition of state, federal and provincial fish and wildlife agencies, working through the Mississippi and Atlantic flyway councils, released a management plan for the eastern population of sandhill cranes that would allow hunting if certain thresholds are met. Michigan was represented in that plan by the all-bird biologist for the DNR.

While market hunting certainly contributed to the birds’ decline in the early 20th century, hunting regulations since the 1930s and the protection, restoration and management of wetlands – paid for almost exclusively by hunters – helped the eastern population of sandhill cranes recover to more than 30,000 birds by 1996.

The 2010 Management Plan for the Eastern Population of Sandhill Cranes cites more than 80 scientific references and lists four main goals: manage the eastern population to maintain a five-year count between 30,000 and 60,000 cranes; reduce agricultural damage and conflicts; provide for and monitor non-consumptive uses surrounding sandhill cranes as an education tool; and provide hunting opportunities.

The 2010 plan, which Michigan’s DNR helped develop, allows hunting to occur if a three-year population average, based on fall survey counts, tops 30,000. The most recent (2019) three-year average is just above 86,000 (more than 26,000 birds greater than the council’s upper-threshold recommendation), according to the 2020 Status and Harvests of Sandhill Cranes report by the USFWS. The 2020 fall survey count of the eastern population was 94,879, with 18,874 sandhill cranes being counted in Michigan.

Tom Cooper, USFWS Region 3 migratory bird chief, said that if Michigan were to submit a hunt proposal approved by the Mississippi Flyway Council that follows the management plan, the USFWS would likely approve the request.

“Proposals to initiate a sandhill crane hunting season are prepared by state agencies, presented to the flyway councils for approval and reviewed by the US Fish and Wildlife Service Regulations Committee,” Cooper said. “Each state throughout the flyway was represented in the management plan process that set the framework states must follow to have a hunt.”

Tennessee, Kentucky and Alabama are the three states in the Mississippi flyway currently holding a sandhill crane hunt for the eastern population, with Alabama instituting the most recent season in 2019.

Currently, seasons are granted by the USFWS on a three-year, trial period basis in order to collect data before granting a state an operational season.

In late 2019, Ontario fish and wildlife managers commissioned a study to determine the feasibility of a hunt, but there is not currently a season for this species in this province. Due to the migratory nature of this species, Canadian wildlife managers would have to be consulted prior to a Michigan hunting season under the requirements of the Migratory Bird Treaty Act.

NRC Chair Carol Rose (I-Hillman) and Commissioners J.R. Richardson (R-Ontonogan) and Mike Lashbrook (D-East Lansing) said in their 2020 Senate confirmation hearings that they would support a sandhill crane hunting season if the science demonstrated that hunting could be an appropriate management tool.

In order for the DNR to bring forward information regarding sandhill cranes to the NRC and initiate the federal review, the NRC would likely need to make a formal request to the department.

After information is brought forward, the commission would then weigh, through public discourse, whether or not the eastern population of sandhill cranes should be listed as a game species in Michigan.

Trotter said given that science shows Michigan has a sustainable eastern population of sandhill cranes, the NRC would be remiss if they did not name them a game species and ask the DNR to apply for a hunt under the management plan framework that it helped develop in 2010.

“Science does not alter itself for political agendas and social sentiments,” Trotter said. “Conservation and game management do not have a side of the aisle, and we hope that those we have entrusted with implementing sound scientific management practices are able to objectively consider the facts in front of them.”

Those facts are clear – Michigan’s sandhill crane population is robust enough to support a hunting season.