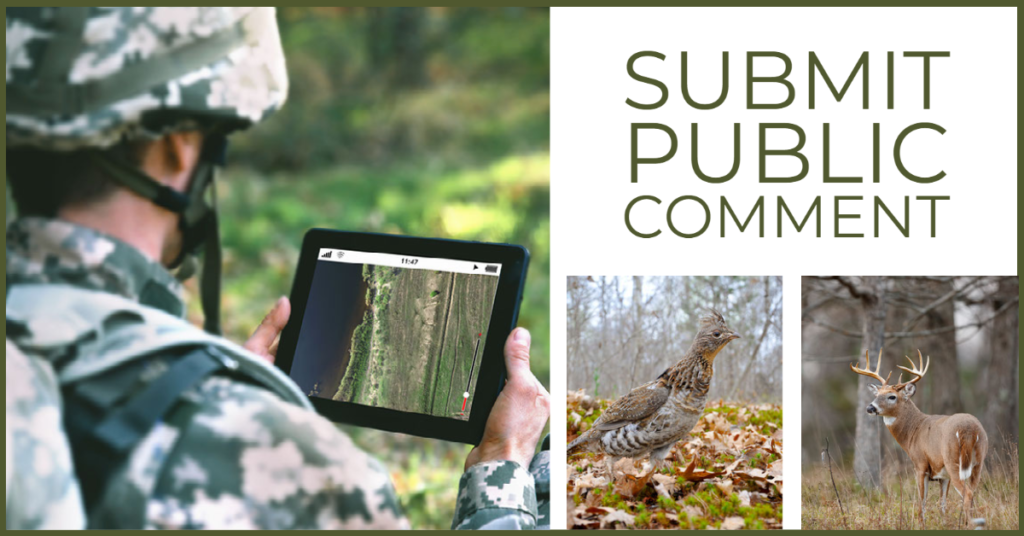 With no specific deadline for public comment regarding the proposed expansion of the National Guard base, those interested should submit comments sooner rather than later.

In June, the National Guard announced its intention to expand Camp Grayling’s current lease of 148,000 acres to 315,000 acres — more than doubling its current footprint on public land. For the guard to do so, it must receive sign-off from Department of Natural Resources (DNR) Director Dan Eichinger and go through a thorough and intense review process first.

The DNR manages the state-owned lands in question for Michiganders to hunt, fish, trap, and recreate on. The proposed area for expansion contains lakes, rivers, streams, forests and fields that are utilized by a variety of wildlife and recreationists.

Understanding why the military needs this amount of additional land is a concern for Michigan United Conservation Clubs, said policy assistant Justin Tomei.

“To date, MUCC and those questioning this expansion have received minimal substantive feedback on why this is a necessary expansion,” Tomei said. “MUCC supports freedom, but it is not an acceptable answer in this context. Proving the need for an expansion falls squarely on the shoulders of the guard.”

Those wishing to submit a public comment can do so by clicking here.

The proposal and review come first

The director must first initiate a review for the DNR to move forward with determining what impacts the proposed expansion would have.

DNR Forest Division Supervisor Tom Barnes, who oversees the region Camp Grayling’s lease currently falls within, said if a review of this magnitude were to be initiated, it would likely be his team that undertakes part of it.

“The resources that would be required of my staff to undertake this proposal are still to be determined,” Barnes said. “We would likely need to contact neighboring units and ask their staff also to start looking into the review process.”

Barnes said this work would be additive to his staff’s regular duties.

The department released an interactive public input map (click here) and a press release regarding the proposed lease expansion of the base and what state lands would be impacted in June.

The review process would consider what lands are eligible for the expansion. Lands purchased using Pittman-Robertson funds (federal excise taxes from firearms, ammo and archery equipment allocated to the state based on hunting license sales) would be excluded.

MUCC’s primary concern at this stage is the resource drain that will be expended to undertake a review of this magnitude with no compensation from the federal government or military, Tomei said.

“The DNR review process will take at least a year,” Tomei said. “We are learning that there will be no financial compensation to the department for this year of review and shifted staff priorities. What won’t get done if this proposal is initiated? That is a big question for us right now.”

At public meetings, the base has committed to ensuring no activities or expansion would be within 1,500 feet of a waterbody.

What if it is approved?

Another MUCC concern is the additional impact on the land and wildlife as an unnecessary burden to the department and constituents who utilize, manage and protect it.

According to an FAQ document released by the National Guard, “low impact or light maneuver training consists of foot traffic, tents, bivouacking and port-a-johns. Vehicle travel will be restricted to current state forest roads and trails.”

While considered light impact by the National Guard, there is a distinct difference between state lands and roadways currently utilized by military personnel from Camp Grayling and those not in terms of habitat and road degradation.

“MUCC feels that this lease expansion or proposal does not align with the DNR’s mission statement, our organization’s core values and does not represent a risk we feel is acceptable for the waters, wildlife and access Michiganders cherish,” Tomei said.

Lastly, the department is ordered to keep open state hunting land via an amended 2009 statute unless certain circumstances are met.

Public Act 47 of 2009, introduced by Rep. Judy Nerat (D-Menominee) and signed into law by Gov. Jennifer Granholm, states: “2(a) Keep land under its control open to hunting unless the department determines that the land should be closed to hunting because of public safety, fish or wildlife management, or homeland security concerns or as otherwise required by law. 2(b) Manage land under its control to support and promote hunting and fishing opportunities to the extent authorized by law.”

The National Guard has said that lands will not be closed; however, the proposal only commits to specifically keeping land open during firearm deer season. If the intent is not to close any public land, that should be reflected in the proposal language.

Anyone wishing to submit public comment on the plan can visit the state’s webpage.