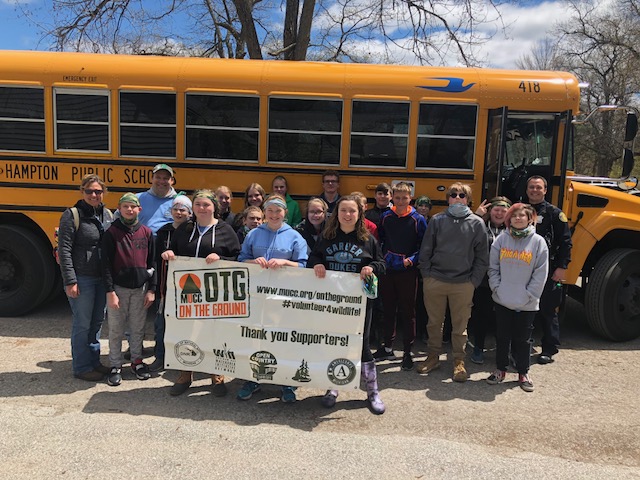 It has been a productive week for MUCC and our OTG Jr. Program!

Despite an OTG Jr. event cancellation due to poor weather on Thursday, May 9th, me, Shaun, Autumn and Morgan still went out to Cass City to complete the tree planting project. After meeting with DNR Wildlife Biologist Tammy Giroux, we drove out to the Elmwood State Game Area where Tammy had selected a planting location for the 300 hawthorn seedlings.

In less than two hours and with only four people, all 300 seedlings were in the ground! These trees are intended to aid in the development of the State Game Area and serve as a buffer between the road and field edge. As the hawthorn matures, it will provide supplemental habitat and foraging material for a broad range of wildlife.

The Frank N. Andersen Trail within Bay City State Park was greatly benefited by the efforts of OTG Jr. volunteers from Cramer Junior High School. On Friday, May 10th, 20 students and three chaperones teamed up with MUCC to remove garlic mustard from portions along the trail that were becoming overrun by the invasive plant species. After 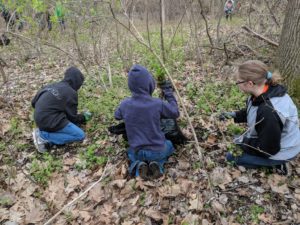 introductions and a quick lesson on the impact invasive species have on ecosystems, the students wasted no time before getting to work.

Cramer students pulled the garlic mustard by hand and collected it in garbage bags, often using teamwork to make the job more enjoyable and efficient. During the pulling, students encountered a variety of warbler species, reptiles and amphibians along the trail. Paired with the sunshine and warmer temperatures that finally made an appearance, the students had a great day getting their hands dirty in the name of 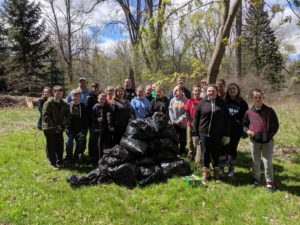 conservation. 24 garbage bags of garlic mustard were filled, each weighing an average of 20 pounds. This means our OTG Jr. volunteers cleared approximately 480 lbs. of garlic mustard from along the path in less than three hours!

Despite all the hard work accomplished, there was still plenty of time for fun. Following a hearty lunch from Subway, OTG Jr. volunteers spent the remainder of their time at the park learning and practicing archery with MUCC staff. It was a relaxing way to end a day of improving public land for both wildlife and recreationists! 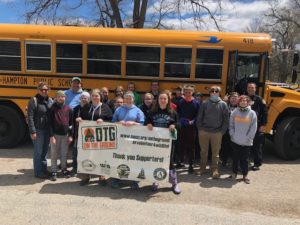 This Saturday, May 18th, we have an OTG event in the beautiful Upper Peninsula in Gwinn, Michigan with the Ruffed Grouse Society. If you’re interested in attending this event or other upcoming OTG events, follow our website and Facebook for updated information or contact me at mlabutte@mucc.org!