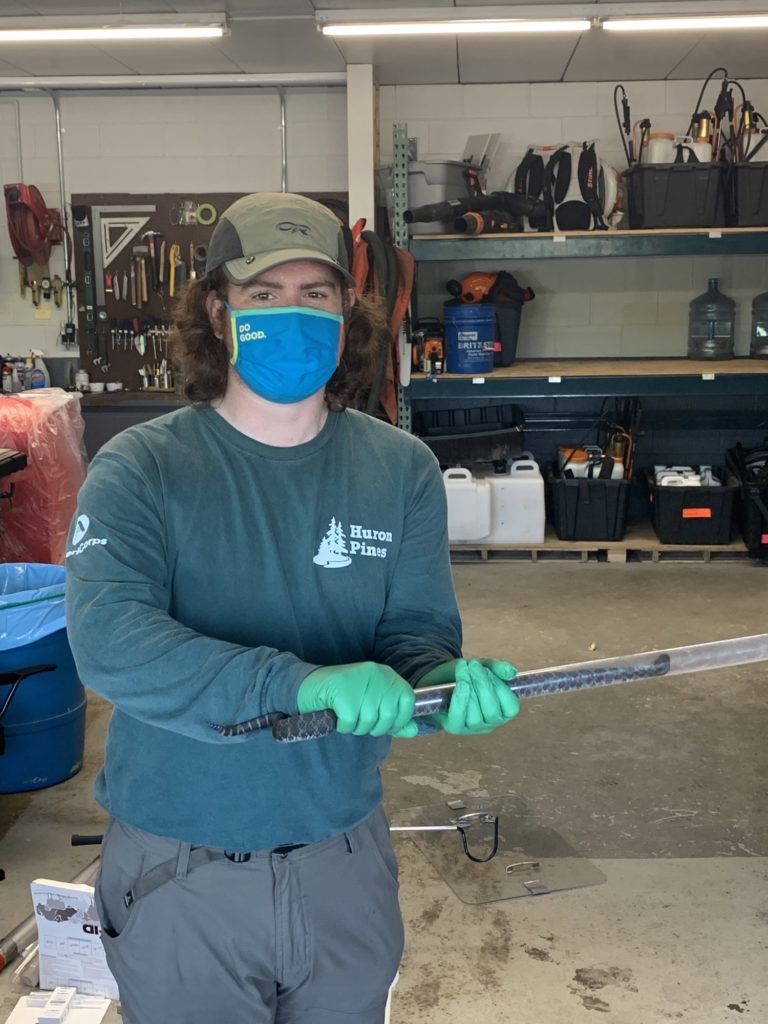 There are few feelings quite exhilarating as seeing a rare and threatened wildlife species in the wild. Your adrenaline kicks into high gear, everything else seems to stop and you are completely transfixed by its movements. I can attest this is what happened the first time I saw an Eastern massasauga rattlesnake.

I was fortunate enough to have that experience when I accompanied Huron Pines AmeriCorps (HPA) members from Michigan Natural Features Inventory (MNFI) and the United States Fish and Wildlife Service (USFWS) for an Eastern massasauga rattlesnake survey a few weeks ago in Oakland County.

I had never participated in such a survey before and did not know much about herpetology: the study of reptiles and amphibians. When the opportunity presented itself, I thought it was a great opportunity to broaden my knowledge and have a new experience in conservation.

Eastern massasaugas are the only venomous snake species in Michigan and have been on the Endangered Species List since 2016.

According to the USFWS, “The Eastern massasauga is a small, thick-bodied rattlesnake that lives in shallow wetlands and adjacent uplands in portions of Illinois, Indiana, Iowa, Michigan, Minnesota, New York, Ohio, Pennsylvania, Wisconsin and Ontario. The Eastern massasauga has been declining over the past three decades due to loss and fragmentation of its wetland habitat. Throughout its range, biologists have confirmed that less than half of the Eastern massasauga’s historical populations still exist.”

Led by MNFI seasonal technicians, we spread out across the prairie fen, which I learned on the day was a “wetland community dominated by sedges, grasses and other graminoids,” and began the survey by walking, looking for good spots with shade/cover and listening for the buzzing sound of an Eastern massasauga rattle. 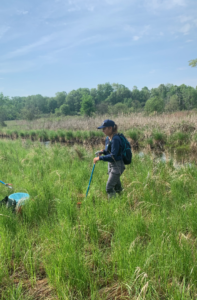 Luckily for our group, we did not have to go far. Molly Fava, an HPA member serving with MNFI, found the first snake of the day only about 10 minutes into the survey. The whole group stopped, looked around and quickly prepared for the capture and data collection.

Using snake tongs, one of the MNFI technicians carefully handled the snake and placed it in a pillowcase lining a five-gallon bucket. Still using tongs, the pillowcase was draped over the side of the bucket and then the lid was placed on top so that a knot could be safely tied in the pillowcase. A flag was placed at the site of the capture so that the snake could be returned to the same location after the data collection. Our group found a second Eastern massasauga about 20 minutes later and repeated the process.

During the processing portion of the survey, MNFI collected many different points of data for their study, including the length of the body, the length of the rattle, their weight, number of markings and among other data points they examined the snakes for potential signs of Snake Fungal Disease .

Participating in this survey was a great privilege. These ongoing surveys will provide valuable information about Eastern massasauga rattlesnake populations and behavior here in Michigan.

To learn more about Eastern massasauga rattlesnakes and the important work of Michigan Natural Features Inventory, click this link.