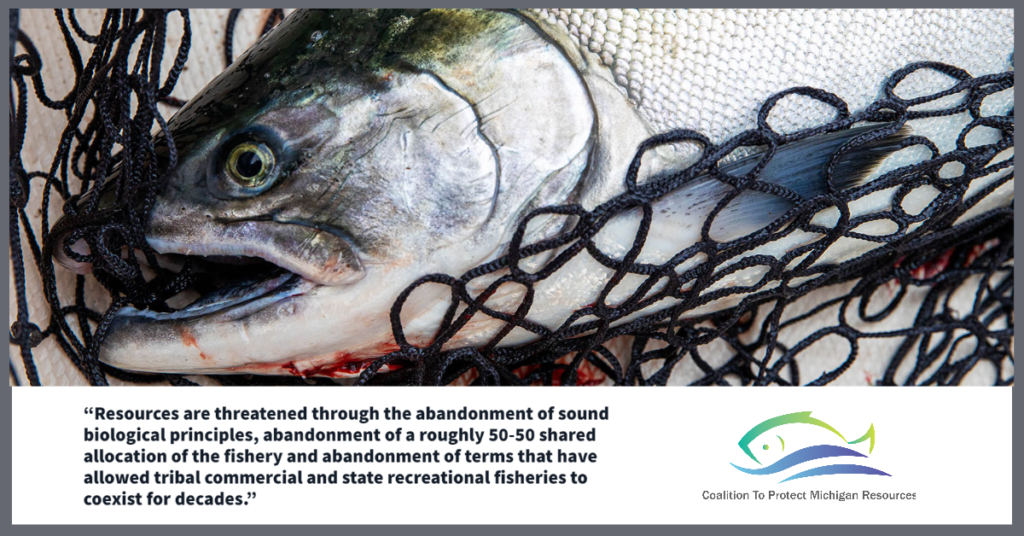 A coalition of conservation organizations filed a motion to intervene Wednesday in the ongoing consent decree negotiations between the State of Michigan, federal government and five sovereign Native American tribes.

Judge Paul Maloney will decide on the motion, filed in a Western Michigan federal court (click to view the filing brief).

The Coalition to Protect Michigan Resources (CPMR) has its roots in a 1979 court ruling that affirmed rights under an 1836 Treaty. In 1984, the Coalition was granted amicus status as the first agreement on fishing rights was negotiated and has worked closely on each iteration of the decree since.

A Great Lakes Consent Decree governs fishing regulations in certain waters of lakes Michigan and Huron from Grand Haven north around the tip of the mitt to Alpena and most of eastern Lake Superior. Primarily, the decree governs the balance between recreational and tribal commercial fishing of lake trout and whitefish in waters in the Treaty of 1836 through a zonal approach.

The motion states “the breakdown in the relationship with the State has gotten to the point that Intervenors believe the Great Lakes fishery resources are threatened through the abandonment of sound biological principles that we believe should guide decisions related to the fishery, abandonment of a roughly 50-50 shared allocation of the fishery set forth in the 2000 Decreeand and abandonment of terms from the 2000 Decree that have allowed tribal commercial and state recreational fisheries to coexist for decades.”

The State of Michigan and the Michigan Department of Natural Resources (DNR) are not protecting the interests of recreational anglers in ongoing negotiations. Pressures have increased to finalize a decree quickly rather than trying to address areas of possible conflict, said CPMR President Tony Radenjovich. He said that this has limited the Coalition’s ability to defend the interests of its members.

“The State is not protecting the interests of our members who are conservationists, charter boat captains, boaters, paddlers and users of our Great Lakes,” Radenjovich said. “The increased urgency to finalize a decree has not included the Coalition.”

The Coalition to Protect Michigan Resources

CPMR is made up of a board of directors whose members include Michigan United Conservation Clubs (MUCC), the Michigan Charter Boat Association, Michigan Steelhead and Salmon Fishermen’s Association, and Hammond Bay Area Anglers Association. It includes numerous other supporting groups throughout the state.

CPMR is joined in the filing by Bay de Noc Great Lakes Sportfishermen, another amicus to the ongoing negotiations.

Amy Trotter, CPMR treasurer and MUCC executive director, said her members are conservationists whose first and foremost priority is the resource.

“Our members have worked hand-in-hand with the department for 40 years on this specific issue to ensure that their license dollars, conservation efforts and mission help the department better habitat and the fishery as a whole,” Trotter said. “Never have we been as dismissed, removed from the conversations, patronized or disregarded as we have been in these negotiations.”

Members of CPMR and all parties to the negotiations are bound by non-disclosure agreements — this limits the ability to discuss specific proposals related to zones, gear and enforcement.

Since the first decree was adopted by the court in 1985, the parties have agreed upon a roughly 50-50 shared allocation of the fishery resource.

Radenjovich said that during this recent round of negotiations, CPMR members have not been allowed to participate at the negotiating table in a meaningful way.

“The lasting effects of this decree will reverberate throughout all of the port towns, small communities and industries that rely on healthy, sustainable fisheries to support them,” Radenjovich said. “Our members are anglers, conservationists and boaters who have been partners of the State in these negotiations for 40 years.“

The 1985 agreement allocated the fishery among the parties by lake, tribal and recreational zones, species and catch limits. It was premised on a roughly 50-50 allocation of the fishery between state and tribal fishers.

The 2000 decree took a slightly different approach to achieve a roughly equally-shared fishery. The agreement created commercial fishing zones where Tribal or state-licensed commercial fishing was permitted. Within those zones, certain areas had gear limitations (such as trap net only areas), closed areas (such as near harbor mouths or near refuges reserved for lake trout rehabilitation) and reserved areas designated for a particular tribe and fishing practice.

Lake trout natural reproduction is under duress in some parts of the lakes. Preserving lake trout spawning stocks will be critical to the future of that fishery, said Jim Johnson, CPMR member and former DNR fisheries biologist.

“Reasons for the decline are not a secret,” Johnson said. “All parties involved should be working to rehabilitate the lake trout and whitefish fisheries. All of us depend on healthy fish stocks that we can share equally.”

A sustainable lake trout fishery is now especially important. The near collapse of whitefish and declines in salmon mean lake trout could prove to be the mainstay of lakes Huron and Michigan fisheries now and long into the future.