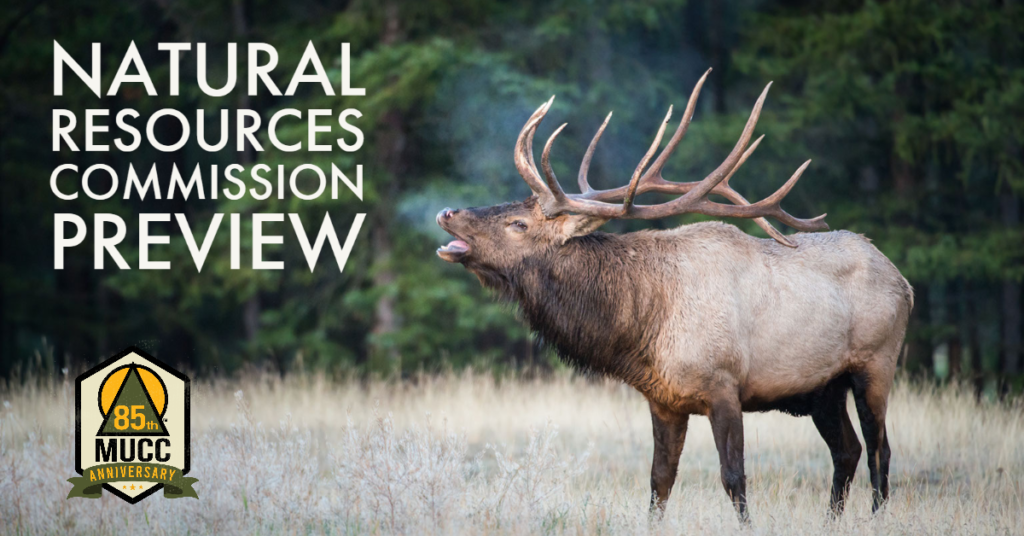 An elk order is the only item up for action at the April Natural Resources Commission (NRC) meeting.

Commissioners are expected to take action on the single wildlife order: setting elk regulations for the 2022 and 2023 seasons. No substantial changes to season structure, quotas or dates have been recommended by the Department of Natural Resources (DNR). The DNR has, however, requested removal of the language allowing them to host a January hunt, citing the hunt is rarely used and other management tools exist.

Michigan United Conservation Clubs (MUCC) has no position on the removal of the January hunt language. MUCC Policy Assistant Justin Tomei said that as long as the DNR achieves population goals, the language’s removal is appropriate.

“The January hunt was a tool for the department to use to achieve a desired goal,” Tomei said. “If that tool is no longer useful and the feasibility of a January hunt is a barrier, then MUCC supports removing language.”

Not initially on the agenda was fisheries order 253.22A, Great Lakes and Connecting Waters – Trout and Salmon Regulations. The order was added to the agenda late last week. This order is a change in the limit on lake trout and splake in the area designated MH-1 from three lake trout and splake per day to no more than two in combination. This is a result of overharvest by recreational anglers requiring DNR remediation as part of the 2000 consent decree agreement.

The Director’s report for the meeting will consist of Seth Herbst, assistant chief of DNR Fisheries Division, presenting the proposed fisheries order changes. Former commissioner Vicki Pontz will also be recognized by the director.

There are seven land transactions on the agenda. MUCC has a resolution to take a position on transactions involving 80 acres or more.

Of the seven, only one is larger than 80 acres. Land transaction case number 20190202 is trading 520 privately-owned acres for 520 state-owned acres. The private land being acquired provides more access to state forest land, while the public land being traded currently has no easement. MUCC is in support of this transaction.

MUCC will be live streaming the meeting, beginning at 9 am with the wildlife committee on our Facebook page.