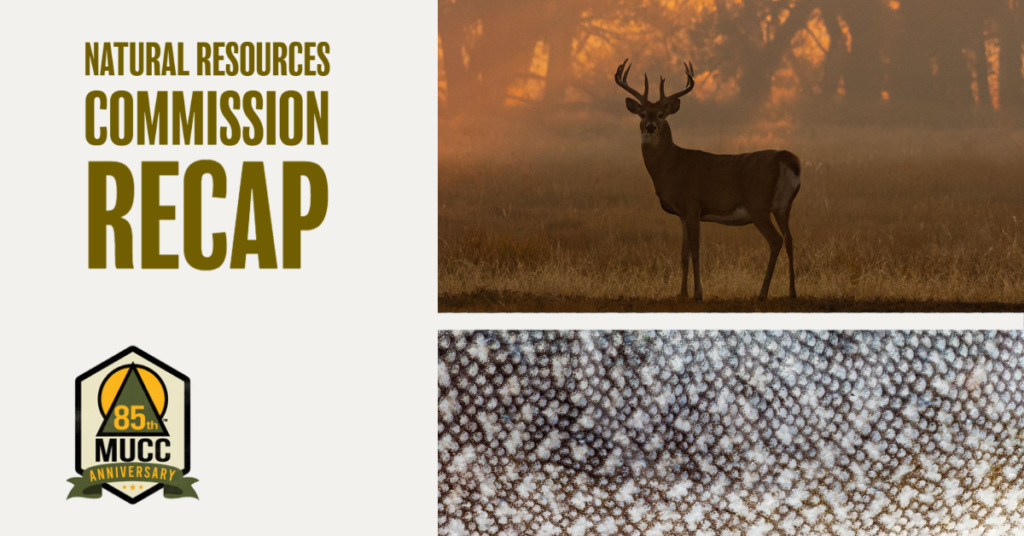 The order, passed unanimously, sets elk season dates for the 2022, 2023 season and removes language allowing the Department of Natural Resources (DNR) to hold a January hunt. Michigan United Conservation Clubs (MUCC) has no position on this removal of language.

DNR Director Dan Eichinger gave a brief update on the Governor’s executive budget proposal, including a number of generational investments. He noted the governor’s signing of a supplemental budget appropriation providing critical and unprecedented spending in Michigan’s parks and public lands.

Commissioners also heard for information Fisheries Order 253.22A which lowers lake trout and splake daily bag limit from three fish to two in combination for the region MH-1.  Dr. Seth Herbst of the Fisheries Division presented the order, the history and alternative regulations that could be considered. This change is born from overharvesting by recreational anglers under the 2000 consent decree. This order will be up for action at the May meeting.

Commissioners asked Herbst about the department’s ability to  manage MH-1 and MH-2 as a single unit. Recreational harvest in MH-2 is well below the maximum under the consent decree and increasing the harvest limit in MH-2 is “unlikely” to cause an over harvest in the unit.

Commissioner Baird also asked for the department to prepare an amendment to the fisheries order raising the bag limit in MH-2 from three fish to four fish in addition to the reduction in MH-1.

The NRC meeting was preceded by a wildlife committee meeting which consisted of various presentations by department staff.

Committee members saw a presentation on Bovine Tuberculosis (TB) Surveillance Update from Dr. Norah Wineland, MDARD and Dr. Megan Moriarty, DNR and Emily Sewell, DNR. TB is a one health issue according to the department because it affects animal health, human health, and environmental health.

2021 TB Surveillance consisted of deer check stations and 24 hour drop boxes. Efforts were targeted in the Northeastern Lower Peninsula. Last year was the first time the department worked with deer processors to collect heads. Processors were reimbursed for their time.

Of the 11,791 deer tested in 2021, 18 were positive for bovine tuberculosis. That brings the total positive since the program began in 1995 to 967 of 334,090 tested. A TB vaccine for free ranging whitetailed deer is currently being tested in the field, currently trying different methods for delivery of the vaccine, Dr. Moriarty has no timeline available for further development of this vaccine.

Following the TB update, Scott Whitcomb from DNR Executive Division and Melinda Cosgrove from Wildlife Division gave an update on Chronic Wasting Disease (CWD) surveillance. In 2021, the department tested more than 7,000 deer —  a substantial increase from 2020.

Scott Whitcomb highlighted a department plan for rotating surveillance of free-ranging deer. In the upcoming phase two, effort will focus largely on the thumb as new territory. The plan will keep moving north, with the Upper Peninsula coming in year five. After completion of the fifth year, the department will reassess but current intent is to start a similar rotational surveillance plan over.

The last presentation to the wildlife committee is a deer regulation update by Chad Stewart of Wildlife Division. Deer harvest peaked in the late 1990s with over 600,000 deer. We are still well below that in terms of annual harvest and it is not a situation that the department views as favorable or even achievable.

Stewart made it clear that the department’s management plans and goals will not, as critics claim, eliminate the white-tailed deer from the Michigan landscape.

The next meeting of the NRC will be at Crystal Mountain in Thompsonville on May 12.

Posted in Uncategorized
← On the Ground: Volunteers Clean-Up the Clinton River at River Bends ParkThe Great Grasslands of Michigan →