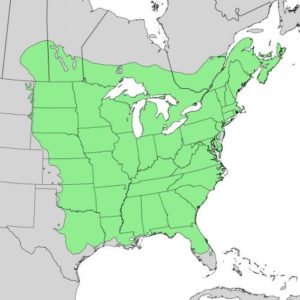 The native range of the American elm. Image provided by MSU Extension.

The Michigan Department of Natural Resources is requesting the public’s assistance in identifying the locations of American elm trees that are still standing and healthy in Michigan. Known as “survivor elms”, researchers are hoping that these trees will be the driving force behind a new, disease-resistant version of the American elm tree population.

Decimated by Dutch elm disease in the 1950s, the once-widespread American elm whithered and died throughout its range across eastern North America. These proud, attractive trees were a favorite in cities and suburbs across the U.S. and were found throughout forests in their native range. Following the fungal infection spread by elm bark beetles, the American elm tree population quickly faltered and was nearly wiped out.

Although Dutch elm disease is still present and able to infect new American elm trees, it is believed that there are still some trees standing that may not have simply avoided the disease, but actually have a genetic resistance to it. On behalf of Midwestern forest researchers, the DNR is now calling on the public to share the locations of surviving American elm trees anywhere in Michigan. Researchers intend to locate the tree so that a branch sample can be taken and used in their effort to create a new, disease-resistant variety of the American elm. 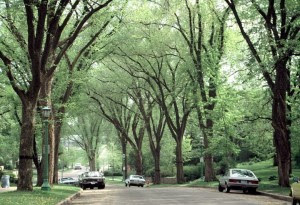 In partnership with the U.S. Forest Service, state natural resource agencies throughout the Midwest have come together to bring back the American elm tree through the collection of branch samples. These samples will be used to create a seed orchard of genetically diverse

and resilient American elm trees that will not succumb to Dutch elm disease.

Should you find or know where to find one of these rare American Elms, please record the location of the tree, its DBH at 4.5 feet above the ground and submit this information to the survivor elm website.