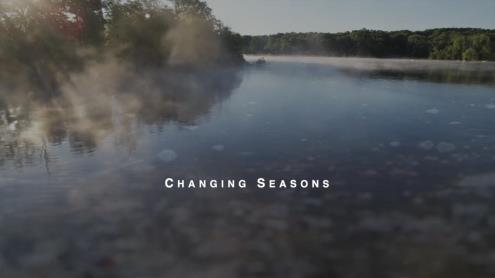 Michigan United Conservation Clubs and the National Wildlife Federation have released a new short film on the impacts of a changing climate to hunting and fishing in Michigan. Changing Seasons features the observations of hunters and anglers and real-world recommendations from biologists and conservation organizations on both policy solutions and how hunters and anglers can mitigate the impacts of climate change to fish and wildlife. The film is a companion to the report of the same name released by the organizations earlier this year.

Check out the film here.

Michigan’s outdoor traditions and economy are at risk due to the impacts of a changing climate on the landscape, said MUCC Executive Director Amy Trotter.

“Michigan hunters and anglers contribute $11.2 billion to the state’s economy annually, supporting communities and jobs throughout,” said Trotter. “Hunters, anglers and trappers must be at the table with decision-makers to mitigate impacts like warming trout streams, northward regression of habitat and frequent blow days on the Great Lakes to protect our environmental, recreational and economic well-being.”

Changing Seasons details how earlier warming periods and extreme swings from drought to heavy rains can increase the parasitic midges that cause Epizootic Hemorrhagic Disease (EHD) in deer, as it did in the 2012 die-off we experienced here in Michigan. Waterfowl migration patterns are being impacted by warming weather later into the winter and habitat could be lost by a reduction in wetlands. Ruffed grouse nesting is impacted by droughts and flooding and warming weather can increase the risk of mosquito-born West Nile Virus.

“Here in Michigan, we enjoy world-class hunting, fishing, and outdoor recreation opportunities.  However, that quality of life is at risk due to climate change,” said Marc Smith, Policy Director for the Great Lakes Office of the National Wildlife Federation. “The hunting and fishing organizations in this state understand that we can no longer sit on the sidelines – we have to be at the table because we’re seeing these changes.”

The film debuts on Michigan Out-of-Doors TV tonight and can be viewed online at https://vimeo.com/637187704. The full Changing Seasons report is accessible at https://mucc.org/policy-research/ and more information about climate change impacts to Michigan’s fish and wildlife can be found here.