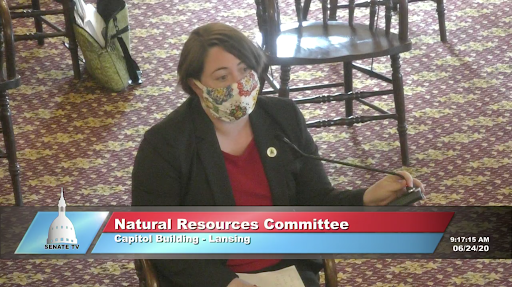 The Michigan Senate Committee on Natural Resources heard its third round of testimony on House Bills 4567, 4568 and 4569 Wednesday.

The three bills seek to protect game fish and update rules that have not been changed since 1971 for state-licensed, Great Lakes commercial fishers.

Decades of over-harvesting from commercial fishers, a lack of regulation and the impacts of aquatic invasive species led to the collapse of  lake trout, walleye and perch populations in the middle of the 20th century. Since the late 1960s, our Great Lakes fisheries have been managed with recreational anglers’ and hunters’ money.

MUCC Executive Director Amy Trotter said bringing our commercial fishing regulations into the 21st century is imperative as we look to the future management of our Great Lakes fisheries.

“Modernizing decades-old law is an important first step in protecting the game fish that recreational anglers have paid to recover,” Trotter said. “Hunter and angler dollars and federal excise taxes on our gear fund the bulk of fisheries management in our state, and we will not stand for subsidizing the commercial industry.”

In an initial hearing on June 11, committee members heard from the bill sponsors, as well as DNR fisheries and law enforcement division staff, who are in support of the bill package. The Sault Ste. Marie Tribe of Chippewa Indians and DNR presented during a second hearing on June 17.

Recreational anglers fund the majority of fisheries management in the state through the sale of fishing licenses and federal excise taxes on fishing gear (collected through the Dingell-Johnson Federal Aid in Sport Fish Recreation Act). Money from the state Game and Fish Protection Fund, which is derived from hunting and angling license dollars, covers roughly 60 percent of the DNR Fisheries Division annual budget (~$19.6 million) and federal Dingell-Johnson funding provides much of the remaining budget for the division (~$11 million). Commercial fishers contribute less than $10,000 to this budget through their license fees.

The DNR Fisheries Division is responsible for the management, and recovery, of all fish species in the Michigan waters of the Great Lakes. This includes a number of biologists who work diligently to model populations, actively manage fisheries habitat and maintain a robust stocking program. Stocking is a $10.4 million program that has led to the recovery of iconic Great Lakes species like walleye and lake trout. DNR Fisheries Division also oversees the commercial fishing industry, with an estimated price tag of $1 million annually for oversight and enforcement – a cost not recouped through commercial license fees.

Executive Director of Michigan Trout Unlimited Bryan Burroughs stressed the importance of fish as a publicly-owned resource in his testimony Wednesday.

“The Public Trust Doctrine dictates how public trust resources, like fish, shall be managed. Generally, this means that state leaders should manage them in a way that provides the greatest amount of good to the greatest number of people and that they be maintained for the benefit of both current and future generations,” Burroughs said. “Recreational fishing has provided the greatest means to achieve those mandates, and it always will be.”

National survey data reveals that Michigan annually hosts an estimated 650,000 anglers who utilize the Great Lakes in pursuit of a number of species of game fish. These individual anglers make up approximately 46 percent of the total 1.4 million licensed anglers in the state.

The Sportfishing industry represents $2.3 billion in direct expenditures in this state and supports more than 35,000 jobs, as reported in two distinct economic studies commissioned at both the state and federal levels. Both studies exclude multiplier effects of the industry, which are estimated to be roughly $4.3 billion. Importantly, more than 90 percent of this sportfishing industry is made up of small businesses – including manufacturers of tackle and boats, retailers and charter boat captains.

The state-licensed commercial fishing industry brings in a dockside value of around $5 million annually, which is mainly sold on the wholesale market. DNR staff use a multiplier of ten to estimate the total economic impact of the industry. This translates into a liberal estimate of a  $50 million economic impact for Michigan’s entire commercial fishing industry, which pales in comparison to the value proposition of recreational angling.

Michigan charter boat captains have been operating under strict regulations and guidelines for decades according to Bill Winowiecki, president of the Michigan Charter Boat Association.

“Michigan charter boat captains are held to a high standard of catch data reporting and safety protocols,” Winowiecki said. “This legislation would raise commercial fishers to those standards and provide better data for fisheries management and safety for everyone who enjoys the Great Lakes.”

There are over 570 charter businesses in Michigan that own and operate more than 650 boats on the Great Lakes. In 2019 alone, these businesses took more than 77,000 people fishing on almost 20,000 trips.

MUCC and its 40,000 members would like to thank the bill sponsors: Representatives Lilly (R-Park Township), O’Malley (R-Lake Ann) and Wendzel (R-Watervliet). All three sponsors have dug into the issue at hand and have spent numerous hours talking with stakeholders to craft the best legislation possible.

These bills passed the Michigan House of Representatives in February by a vote of 72-32 with bipartisan support and were referred to the Senate Committee on Natural Resources shortly after. More information on the movement of these bills can be found here.

The three-bill package will likely enter another series of workgroups chaired by Senator Ed McBroom (R-Vulcan). The next step for this package is a vote in the Senate Natural Resources Committee, which McBroom chairs.

Please call your state senator urging them to request a vote for House Bills 4567, 4568 and 4569 in the Senate Natural Resources Committee. For more information on how you can get in contact with your state senator, please visit the MUCC policy action center website.

As always, MUCC will be there at every step to represent our members and all of the recreational anglers of Michigan. Since 1937, MUCC has united citizens to conserve, protect and enhance Michigan’s natural resources and outdoor heritage. MUCC has also been the constant protector of your rights to hunt, fish and trap since its founding. Consider joining us today: http://bit.ly/JoinMUCC