The DNR Nature Center Summit took place virtually on February 11th. The event was a collaborative of biologists, educators, nature centers, zoos and conservation districts about Michigan’s current conservation concerns and the new mediating techniques and technologies. A variety of items were discussed, including the double-crested cormorant, nuisance wildlife, determining the value of your forest, cooperative invasive species management areas, arctic grayling, sturgeon recovery, bird conservation and climate change. Below are brief descriptions of each topic. If you missed the event or would like to learn more, the recording of the talk is posted at the bottom. 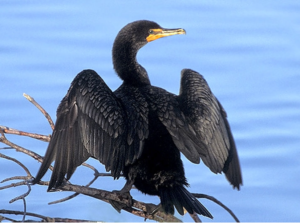 Double-crested Cormorant management has been a widely controversial issue in Michigan, this talk described the biology of the cormorant, conflicts associated with the bird and possible solutions. They are protected under the Migratory Bird Treaty Act of 1918, and hunting of the species is illegal. Their diet is composed mainly of fish and they tend to congregate in very productive areas leading to conflict with fishermen utilizing the same stock. Another concern is with their feces, it’s acidic and a large amount can change the vegetation composition of the area. Upset citizens as retaliation released pigs in the protected nesting areas to eat the cormorant’s eggs, unannounced to them this action also impacted other coastal birds that use this area for nesting. Illegal poaching and nest destruction have also taken place. Some possible solutions include agency-approved removal of nests, scaring away birds with firecrackers, federally sanctioned removal of troublesome individuals and continued research into the cormorant’s effects on the surrounding population. 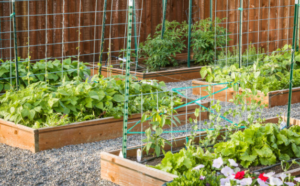 The presentation on nuisance wildlife discussed how to live with and adapt to the wildlife around you. This talk focused on non-lethal means of management, which is especially helpful for urban areas where hunting an animal is not an option. Means of control for raccoons, rabbits, coyotes, skunks, deer and squirrels were discussed. Common problems are the animals getting into gardens, bird feed, trash and damaging infrastructure. Methods of management include placing gravel or a hard substance around your garden, fencing off areas, applying chemical repellants, removing access to food and adapting to behaviors (like planting something less appealing or blocking an entry point). More specifically with coyotes, the goal is to make them fear humans, this could be done by shouting and making yourself appear larger. Proper and consistent management practices can promote cooperative living with wildlife.

What Is Your Green Space Worth? Using i-Tree to Determine Value of Trees: 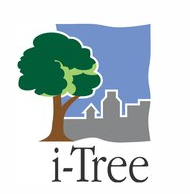 The value of green spaces is very complex, understanding the benefits provided by an area can be simplified with the new i-Tree app. This toolkit assigns economic value to any area of land to help people understand the important benefits they provide. It can be used on anything from individual trees to large expanses. It takes in data about species, age, canopy cover, amount of invasive, carbon uptake, erosion control and more to provide you a comprehensive view of the benefits provided by the area. This discussion was about the importance of helping people understand the complexity and benefit of their green spaces.

A Cooperative Invasive Species Management Area (CISMA) is a formation of organizations trying to reduce the impact of invasive species on public and private land. These cooperatives arose because of the conflict between neighbors due to poorly managed property. Invasive species would cross property lines and disturb multiple people’s land. People formed cooperatives and applied proper control methods to preserve their land. These groups fill a niche for the DNR and other wildlife agencies, they can impact private land and prevent invasive species from spreading to public land. CISMAs are well-prepared and informative groups that can help with the management of invasive species and have long been used as a resource for conservation.

Reestablishing Arctic Grayling in Michigan and Sturgeon Recovery in the Great Lakes Region:

Lake sturgeon and arctic grayling were prominent species in Michigan, sadly both populations declined and both were brought to the edge of extirpation. Each presentation discussed the recovery plans and the hurdles faced for each species. The Arctic Grayling Initiative in the past had unsuccessful reintroduction events. There were issues concerning the age of the introduced fish and the genetic diversity of the broodstock. However, success has been shown in Montana with reintroductions, and a genetically diverse population of arctic grayling has been found in Alaska. Even though it may take a considerable amount of time to determine if the reintroduction in Michigan will be successful, new methods and success stories spark hope for the Arctic Grayling Initiative. Lake sturgeon face many hurdles. Excessive damming of rivers and the sturgeon’s long lifetime make reintroduction and determining the success of the reintroduction difficult. The discussion described the current concerns of reintroduction, the necessary numbers of sturgeon for a stable population, the loss of breeding habitat and the long lifetime of the project. Both projects elaborated on their plans to make stable populations of arctic grayling and lake sturgeon, but both have many hurdles limiting the success. 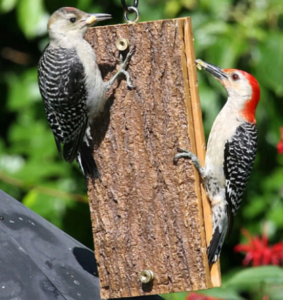 The climate change panel was a collaboration discussing the different ways climate change can affect Michigan’s forest, wildlife, fisheries and recreation. Climate is defined as weather patterns that persist for long periods (30 years). With increased warming, precipitation will fall as rain instead of snow, and flooding events will become more frequent. The time between freezes will increase and there will be more warm months. Summers will be longer, allowing for more recreation, but this will impact the current biodiversity makeup of Michigan. Cold adapted species will move north or become more limited in their range, cold-water species like the brook trout will significantly decrease in range. New species could start to live in Michigan. Overall there are a lot of unknowns about specific changes due to climate change, but it is known that current conditions won’t last and many things will change.

This is a brief overview of the talks for the DNR Nature Summit. If you would like to find out more information about any of the topics, the summit was recorded and can be found here.