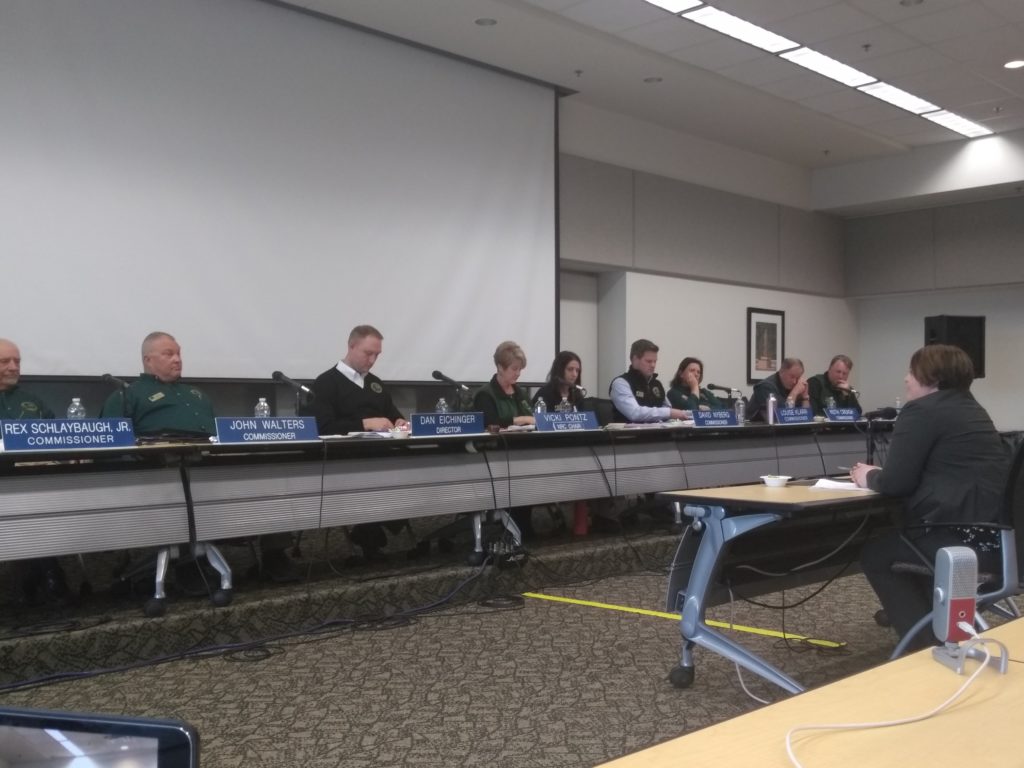 April’s NRC meeting was held at the Michigan State University Veterinary Diagnostic Laboratory. The meeting was live-streamed via MUCC’s Facebook page. Feel free to go back and watch the videos here.

The day of meetings started off with the Michigan State Park Advisory Committee (MSPAC). The committee began by approving a resolution that would address management plans at South and North Higgins Lake State Parks. These resolutions included improved plans to combat aquatic invasive species, as well as several infrastructure projects. One of these projects includes a redeveloped shooting range.

The Policy Committee on Wildlife and Fisheries followed the MSPAC. Michigan Department of Natural Resources (MDNR) Fisheries Division Chief Jim Dexter spoke briefly about Lake Trout regulations in the Grand Traverse Bay area and gave an update on statewide harvest quotas. Lake Trout Management Unit MM-4 is going from a daily bag limit of two fish to one. This was approved by the NRC per Fisheries Order 200.19A. Dexter also spoke about MDNR’s ongoing fish-egg harvest efforts during the spring spawning runs.

MDNR Wildlife Division Chief Russ Mason and Upland Game Bird Specialist Al Stewart presented an update to the committee on proposed fall turkey regulations. These recommendations later came before the full commission for information only. Chief Mason was also joined by Furbearer Specialist Adam Bump to discuss furbearer regulations ahead of the upcoming reauthorization cycle. In addition to these items, Chief Mason also updated the committee on a 2019-20 pheasant reintroduction effort, which will include the release of captively raised birds and conducting learn-to-hunt programs in these areas.

During the meeting of the whole, commissioners recognized Josiah Killingbeck and Scott MacNeill, officers of the Law Enforcement Division, for lifesaving events. The commission also recognized Todd Thorn with the Officer of the Year Award during this time.

Dan O’Brien from the wildlife division provided updates on bovine tuberculosis (bTB). Since the start of tests in 1995, the department has tested 298,000 white-tailed deer and have received 900 positives for bTB. In Michigan, 79 out of 83 counties remain bTB free. A chronic wasting disease (CWD) update was also provided by MDNR Deer Specialist Chad Stewart and Chief Mason. A proposed order for this fall’s deer regulations will be for information come May, with expected action in June on antlerless deer license quotas. In July, CWD regulations are likely to be approved as well.

Craig Burnett, the MDNR legislative liaison, gave an update on several bills in the legislature that are relevant to natural resources issues. MUCC is following these bills and has covered many of them in alerts or blogs.

The only item up for information at this NRC meeting was a proposed order on fall turkey hunting regulations. The regulations proposed in this order do not make major changes to past quotas or rules, but have been slightly adjusted to better meet landowner, DNR and hunter goals.

Commissioners took action on a regulation pertaining to statewide trout, salmon, whitefish, lake herring and smelt harvest. Fisheries Order 200.19A was approved by the NRC with an amendment. Commissioner Walters of Vanderbilt proposed the passed amendment which created a sunset on the 10-fish bag limit of brook trout on the 33 Upper Peninsula Streams. On October 1, 2019, the regulation will go back to a daily limit of 5 brook trout on those designated streams. The intent is to have further discussion on this issue, as there are new members on the commission that did not take part in this section of the order when it was first introduced.

The next meeting of the NRC will take place on May 9 at Lansing Community College.