The study estimates $2.4 to 5.9 million dollars in lost revenue for the Michigan portion of Lake Erie alone. On average, anglers said they canceled five trips in 2019 due to HABs.

Anglers cited potential negative health effects, inability to consume fish and boat or equipment damage as reasons the algal blooms have kept them away. Two-thirds said they decided not to fish at least once in 2019 because of HABs. 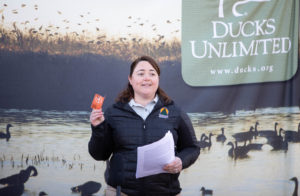 MUCC Executive Director, Amy Trotter, addresses members of the media and fellow stakeholders about harmful algal blooms and the impact it has on Lake Erie as well as Michigan’s anglers on Oct. 27, 2022.

The study, commissioned by Michigan United Conservation Clubs (MUCC) and undertaken by Michigan State University researchers with support from the C.S. Mott Foundation and private donations, aims to understand what impacts blooms are having on recreational anglers, fishing activity and their economic impacts, said Amy Trotter, MUCC executive director.

“Now knowing the devastating economic impacts of harmful algal blooms on our local communities, charter captains and businesses, we can start to look for answers,” Trotter said. “Michiganders should be able to fish, boat and enjoy western Lake Erie uninhibited by worrying about being able to eat their catch or what damage it may inflict on their equipment.”

Lost trips by anglers represented between 12 and 29 percent of the trips they reported taking in 2019.

Former fisheries biologist and advisor to the study Gary Towns said the study was based on anglers’ recollections of 2019 events when asked in early  2020.

“While it can be hard to recall or quantify what someone might have done, we are confident that HABs are significantly impacting Lake Erie, its fishery 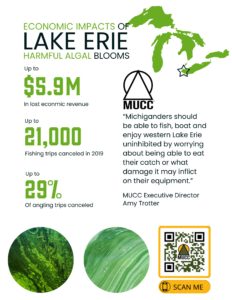 and the anglers who enjoy it,” Towns said. “Michigan’s portion of Lake Erie is a sliver; this issue’s ecological and economic detriments are vast.”

Towns said that roughly 9,000 to 21,000 trips were canceled in 2019 by anglers. This was determined using Michigan Department of Natural Resources (DNR) creel data.

Aesthetics of blooms also cause anglers or recreational boaters to avoid Lake Erie, its bait shops and gas stations.

Trotter said that changing agricultural practices contribute to the problem, as noted in the study, through nonpoint nutrient runoff, particularly phosphorus which is a limiting factor for algal blooms.

“Now that we have a better understanding of what algal blooms mean for fish, we can start to work with partners in all sectors to try and find solutions to this pollution,” Trotter said. “We owe it to Michiganders, the fish and wildlife and, most importantly, next generation to work together and make western Lake Erie a habitat for fishing, fun and recreation again.”

You can read the full report HERE.