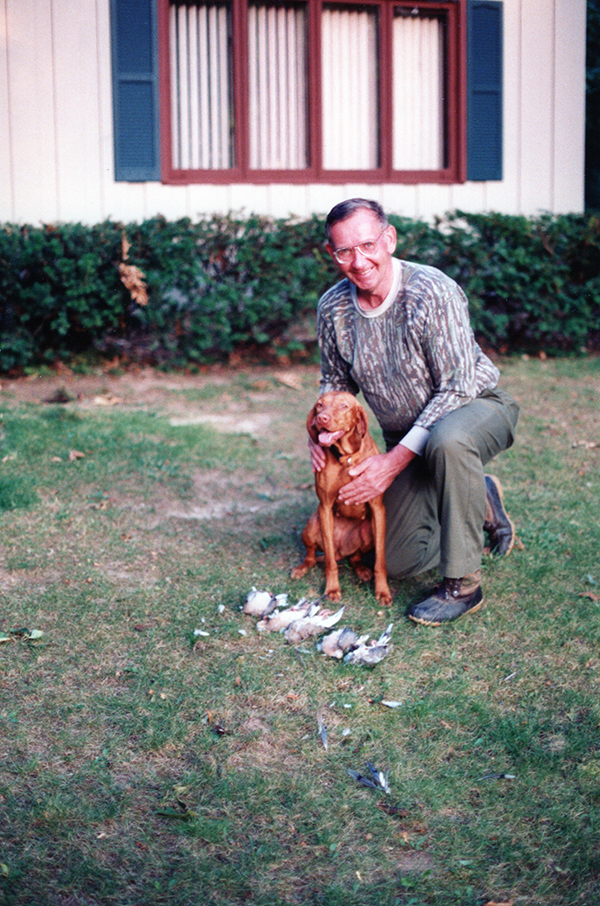 The obituary of Dean Barnum is brief and to the point, listing the dry facts of an unassuming man who loved the outdoors, reading books and filling out the New York Times crossword puzzle in ink.

As anyone who knew Barnum can attest, however, a single 134-word notice printed in the local newspaper doesn’t nearly do the man justice.

Barnum, who died last year at the age of 87, is remembered as someone who craved knowledge and tenaciously pursued it his whole life.

“He was really an extremely bright guy,” said Barnum’s longtime friend Michael Rae, who now serves as executor of his estate. “He absolutely devoured books. He was a ferocious reader … before there was Google, people used to ask Dean (and he often knew the answer to their questions).”

Rae became acquainted with Barnum around 1970, shortly after forming a law practice with his brother in the Battle Creek area. Per a ballot initiative that voters approved at the time, Kellogg Community College had just become its own entity apart from Battle Creek Public Schools. Rae served with Barnum on the board of trustees for the newly-independent college.

In addition to being on the board of trustees, Barnum played other roles at the college, including as an instructor in the social sciences department, teaching history, American government and other classes. He eventually became chair of the department.

In addition to working with Barnum on the board of trustees, Rae said they also played together in a community basketball club, cheekily referred to as the NBA, or Noontime Basketball Association.

Well into his 80s, Barnum continued to play basketball with the NBA several times a week.

Richard Scott, chief financial officer at KCC, remembers how much Barnum enjoyed spending time with his friends on the court.

“His love of the activity and of the camaraderie really showed,” Scott said. “That’s where I got to know him.”

Scott said Barnum had an intense interest in the community and always kept himself informed on local matters and people. In casual conversations with the parents of student-athletes, Scott said Barnum could recall detailed statistics about their kids’ performances.

“He was a conservationist all his life,” Rae said. “He was always very concerned about the environment.”

In addition to being an avid hunter and angler, Rae said Barnum banded woodcock as part of an effort to study and restore their populations in Michigan.

Being a professional educator isn’t exactly the road to riches, but Rae said Barnum applied his acquired wisdom and natural intelligence to other uses, as well. Namely, he made a number of good investments, and by the time he died, he had amassed a sizeable estate.

Recently, three organizations found out that Barnum had bequeathed portions of his wealth to them: Michigan United Conservation Clubs, Kellogg Community College and the Willard Library in Battle Creek. Each was left about $1 million.

“He was a very humble person who lived very modestly,” Scott said. “So we were really, really surprised to find out he had an estate.”

Before he died, Scott said he told Barnum that the school’s new gymnasium would be named in his honor, with his signature painted on the basketball court floor.

“He started to tear up when I told him,” Scott said. “His name will be on that floor as long as it’s there.”

Rae said the library has indicated they intend to use the money to complete technology and facility improvements.

MUCC plans to use $250,000 of the gift to establish the Outdoor Action and Legal Defense Fund which will be used to stave off anti-hunting and anti-conservation initiatives, fund litigation measures if needed and help to promote Michigan’s rich outdoor heritage for generations.

The MUCC Annual Fund, which is meant to leverage more consistent and substantial donations, will be established and receive $650,000 of the donation. Too often, MUCC relies on unpredictable funding such as grants, program fees and membership dues. The investment in this fund will help sustain and grow MUCC’s capacity, ranging from direct advocacy and communications to on-the-ground wildlife habitat conservation and youth outdoor education.

“Dean Barnum’s donation will be utilized in a forward-thinking manner that takes into account all the aspects and challenges of completing the work of 21st-century conservation while thoughtfully memorializing a man whose life mission was education and conservation,” said Amy Trotter, Michigan United Conservation Clubs executive director. “With this donation, MUCC will be able to help educate the next generation of conservation stewards and ensure that Michiganders’ rights to hunt, fish and trap are not infringed upon in the future.”

Given Barnum’s strong ties to education, a portion of the remaining money will be used to establish the Barnum Policy Fellow Endowment Fund which will fund a policy and advocacy intern at MUCC for at least 10 years; to fund Michigan Out-of-Doors Youth Camp programming and infrastructure updates, including naming the camp’s arts and crafts building in honor of Barnum; and provide TRACKS magazine for Calhoun County fourth- and fifth-grade students for two years.

MUCC Conservation Program Specialist Makhayla LaButte said her program will be partnering with the KCC to complete a number of environmental improvement projects around campus in honor of Barnum.

Scott said Barnum used to take frequent walks around Spring Lake, which is overgrown with vegetation and difficult to access.

LaButte said they’ll be trimming the overgrown vegetation, removing old irrigation systems and clearing a pathway to the lake so people can access it with kayaks. She said they’ll also be cleaning up some dumpsites in the area where people had discarded items such as old clothes, mattresses and other garbage.

With help from the community and biology students, MUCC also intends to install duck boxes in the area, remove nuisance invasive species, add interpretive signage and create native plant demo areas where they can observe which species might be potentially beneficial to the site.

Spring Lake cleanup will begin next year, and the remaining projects are planned for the next three to four years, LaButte said.

Trotter said with the remaining money left to them by Barnum, they’ll be setting up a rainy-day fund to use in emergency situations involving legal and policy matters.

Such a fund would have been helpful at the beginning of the pandemic, Trotter said, when MUCC and other organizations contested statewide enforcement of an executive order related to motorized boating. She said if the law firm they contracted with hadn’t decided to do much of the work pro bono, MUCC would have been on the hook for tens of thousands of dollars in attorney fees.

In unexpected situations such as these, Trotter said having resources available at a moment’s notice is imperative.

Barnum was a member of MUCC and while this wasn’t the first time he gave the organization money, Trotter said it’s by far the largest donation they’ve ever received (see sidebar on how to donate, if you’ve been inspired to follow Barnum’s lead).

She added that they’re considering hiring an employee who will be tasked with getting the most out of Barnum’s donation by seeking fund-matching opportunities and other ways to leverage the money to maximum benefit.

Trotter said she wishes she would have known Barnum to understand why he felt MUCC deserved such a generous gift. Given his background in social sciences, she theorized that he might have valued the organization’s mission, which sits at the crossroads of conservation policy and public education.

Rae said Barnum always wanted to make a positive difference in the world and he trusted that the organizations to which he bequeathed his fortune would be able to use the money effectively.

Rae said MUCC, in particular, touches so many aspects of Michigan conservation that it makes sense that Barnum would have valued the organization’s work.

“He wanted to make things better,” Rae said. “He was a strong, elegant man. I feel honored to have been his friend.”