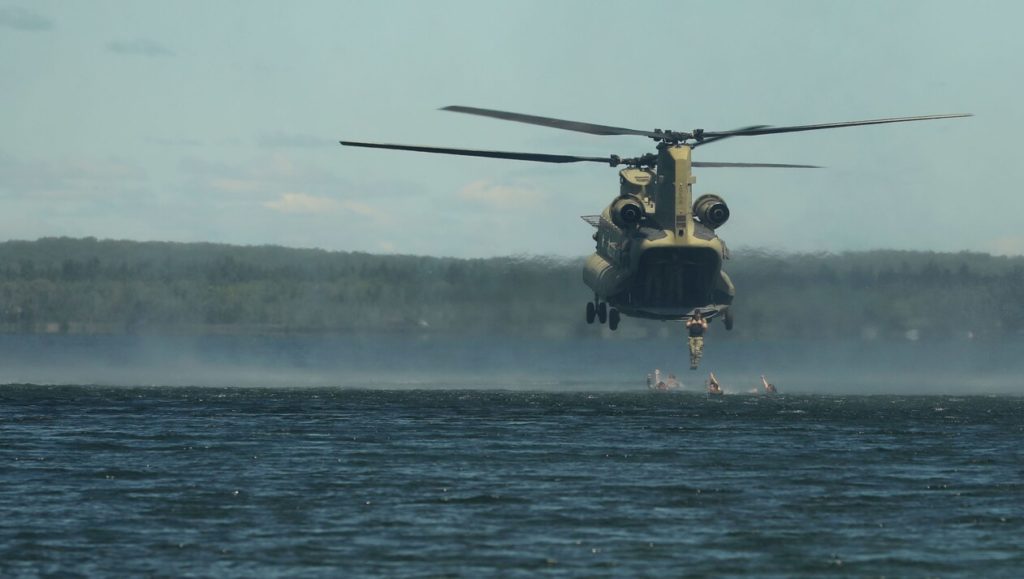 Opposition continues to grow to a Michigan National Guard proposal to take an additional 260 squares miles state land for its Camp Grayling training facility, limiting access to the state land by civilians and potentially hurting wildlife in ways that will hurt residents, businesses and the local economy,

During a virtual news conference today, opponents pointed to resolutions of opposition from Kalkaska County, 16 townships in Kalkaska, Crawford, Montmorency and Roscommon counties, and the state’s largest environmental and conservation organizations including Michigan United Conservation Clubs, Michigan Environmental Council, Michigan League of Conservation Voters, Sierra Club, Trout Unlimited and Anglers of the Au Sable as reasons for Gov. Gretchen Whitmer and the Department of Natural Resources to reject the guard’s land grab.

“All of us support the mission of our military,” said Bear Lake Township Trustee Jim Knight, whose township is one of those in Kalkaska County that have passed a resolution of opposition. “But enough is enough. This is already the largest Guard base in the nation. The Guard leadership has not justified the need to add this much acreage just to prepare for electromagnetic warfare. And Guard leaders have indicated to reporters that they may well sublet this state, public property to private companies, which is simply unacceptable.”

Knight noted that the Guard has developed an unfortunate reputation for failing to live up to existing agreements with the state intended to allow training but limit impact on residents and users of the public property. Recent photos show the Guard training in the Manistee River despite agreements not to use the river itself, the Guard’s failure to clean up the PFAS water contamination that has closed sections of Lake Margarethe in recent years and damaged local drinking water, failure to live up to quiet periods in the major artillery and heavy weapon training, unrepaired damage to local roads and more.

“The trust factor is low. And the Guard has failed to explain how this expansion is necessary. The state should drop this ill-considered proposal and focus on using existing Camp Grayling facilities better and within previous agreements,” Knight said.

Amy Trotter, executive director of the Michigan United Conservation Clubs, said MUCC – with 40,000 members – was the first conservation organization to announce its official opposition to the expansion. The organization passed a 1989 resolution opposing the expansion of Camp Grayling except during a national emergency, as declared by the President or Congress.

“The DNR has a duty to ensure that it does not approve proposals that could limit access and opportunity for Michiganders without good cause and a plan for mitigation of the impacts,” Trotter said. “The militarization of our public land is not something to be taken lightly, and Michigan residents should not have to shoulder the burden for the country’s national security unless a valid and pertinent reason is proven to exist. To date, that reason has not been enunciated.”

Trotter added, “MUCC supports our military, but the people and Michigan’s great outdoors do not need to shoulder any more of the burden.”

Monty Solis, a Frederick Township resident who has been active in the Camp Grayling expansion opposition group (which includes a very active Facebook community), said the expansion will have a negative impact on the local economy. He noted that tourism, hunting and fishing, snowmobiling and other activities would be impeded by the expansion.

“We are already hearing from local realtors that people are shying away from purchasing retirement and riverfront property. Discouraging the vital tourism industry that is a year-round lifeline for our region for unspecified short-term activities by the Guard is not a good tradeoff. And it does nothing to compensation those of us who live year around in the region for the removal of public property that we use for public purposes,” Solis said.

Joe Hemming, president of Anglers of the Au Sable which has long protected the Au Sable and upper Manistee rivers from damaging activities sanctioned by the state including oil drilling, fracking and the ill-considered commercial fish hatchery on the Au Sable, said expanding Camp Grayling would impact two of the state’s greatest trout fishing rivers.

“Man has a long history of damaging our great rivers by taking action without thinking through the consequences,” Hemming said. “Whether it’s been running logs down the river, gouging it and creating erosion, overfishing, damming the river, or using it as a sewer for communities or fish farms, the track record is not good.

“Now comes a proposal for electromagnetic warfare training without any consideration of impact on wildlife. We know noise, light and other sensory changes that have limited impact on humans can have huge impacts on fish, mammals, insects and even trees. We can’t allow massive expansion of this camp into more vital river headwaters and wetlands and testing of electromagnetic warfare without more research into how that may impact humans and wildlife,” Hemming said.