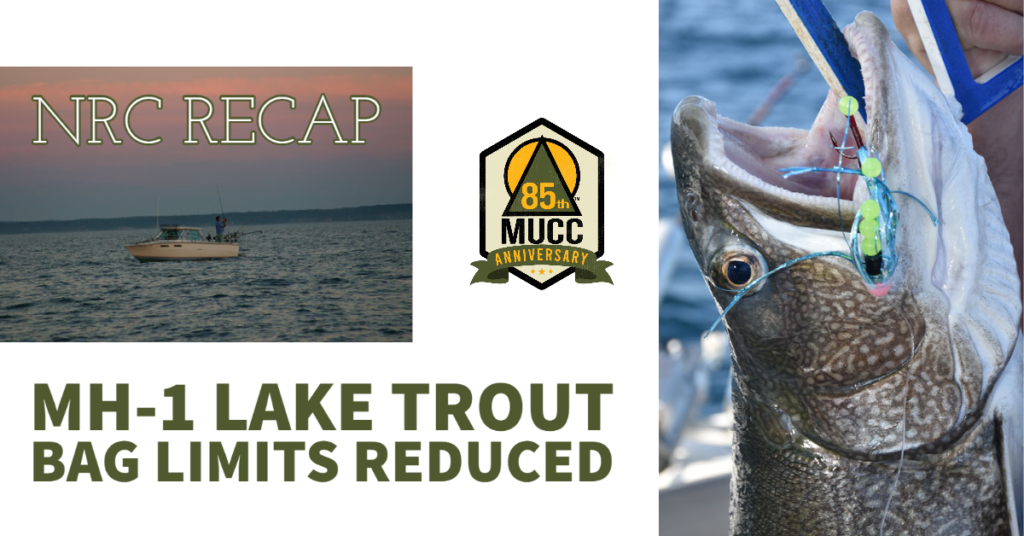 The Natural Resources Commission (NRC) passed a single Fisheries Order at their May meeting.

The order, which passed unanimously, lowers the limit on lake trout and splake from three fish to two in the region of Lake Huron designated MH-1. This change is a result of overharvesting by recreational anglers under the 2000 Consent Decree in MH-1 and required state remediation of the overharvest. Similar adjustments have been made in years prior.

Commissioner Tom Baird asked for an amendment to be prepared to subsequently raise the bag limit in MH-2 from three fish to four. The commissioners did not take up the amendment.

“It’s important to remember that this is an allocation overharvest, not a biological one,” Tomei said. “MUCC hopes the five sovereign tribes, the federal government, and department reach an agreement during ongoing negotiations that will prevent this allocation overharvest from continuing to happen.”

Nicole Hunt, with the DNR Parks and Recreation Division, presented the Land Use Order of the Director Amendments 2-5. Descriptions and links to these land use amendments can be found in MUCC’s May NRC Preview.

Chad Steward, with the DNR wildlife division, presented commissioners Wildlife Conservation Order #4 for information in May and action in June. The order would require Michigan deer hunters to use online reporting of their harvest within 72 hours of recovery.

MUCC does not have a policy on mandatory online deer registration.

The commissioners also received an information legislative report from the DNR.

For new business, there were a number of director’s orders. The DNR is providing discounted antlerless deer tags in Deer Management Unit (DMU) 487 in an effort to increase harvest for bovine tuberculosis surveillance.

Interim Order of the Director No. 1 prohibits field dog trials and dog training using captive-raised birds at the Ionia Recreation Area from May 16-July 31, 2022. According to the DNR, this is an effort to limit the threat of highly pathogenic avian influenza (HPAI) which is being found in captive birds and poultry.

State land review recommendations for Group 4 are up for action by the director. This is part of a standard 10-year review of state-owned properties. Of note, only Marquette and Roscommon Counties have transactions resulting in large-scale (greater than 80 acres) exchanges or disposals of state land.

Preceding the committee of the whole the wildlife committee met and received two presentations.

Dwayne Etter with the wildlife division completed a presentation from the April meeting on Chronic Wasting Disease (CWD) surveillance.

Dr. David Williams from Michigan State University (MSU) then gave a presentation and fielded questions from Commissioners on an MSU CWD research update.

The next meeting of the NRC will be at Lansing Community College on June 9.