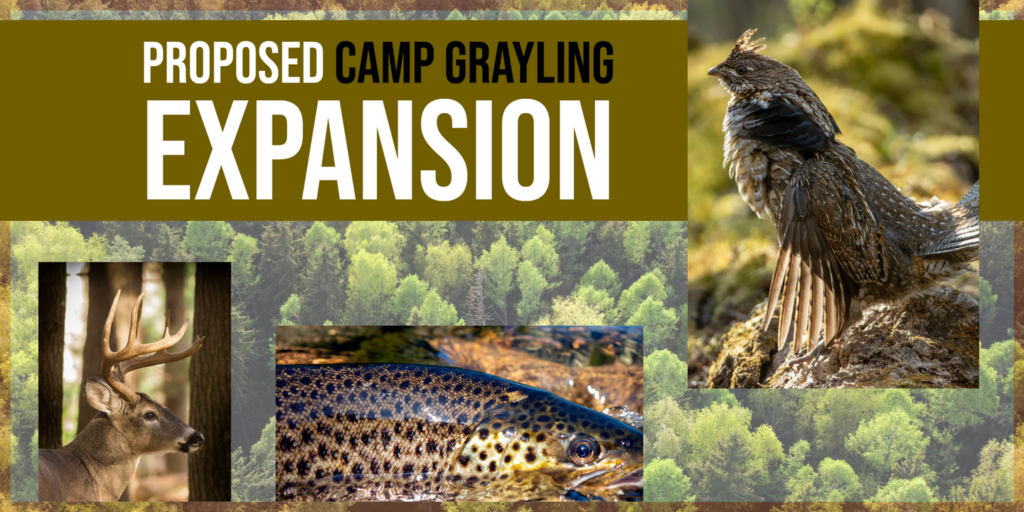 On August 12, the Michigan Department of Natural Resources (DNR) released an updated FAQ page about the proposed Camp Grayling expansion.

The original FAQ page left pertinent and substantive questions unanswered and was revised to better speak to the concerns being raised by Michigan residents.

In June, the National Guard announced its intention to expand Camp Grayling’s current lease of 148,000 acres to 315,000 acres — more than doubling its current footprint on public land. For the guard to do so, it must receive sign-off from DNR Director Dan Eichinger and go through a thorough and intense review process first.

The DNR manages the state-owned lands in question for Michiganders to hunt, fish, trap and recreate on. The proposed area for expansion contains lakes, rivers, streams, forests and fields that are utilized by a variety of wildlife and recreationists.

A few important questions have finally been answered on paper by the department:

What, who and when were the communications about this project begun between the Guard and DNR?

What is the anticipated timeline?

The anticipated completion for the expansion proposal, if approved to proceed and if it passes environmental and parcel reviews, could be more than a year away. However, that estimate could be modified depending on findings during the review process.

What DNR resources, including monetary, personnel, infrastructure, technology, etc. would be used to execute a review of this proposal plan? Would those resources be additional to what already exists or pulled from other projects?

Should the review proceed, it would be incorporated into the plan of work for staff in each office and division that has proposed expansion lands within their respective boundaries.

How much will Camp Grayling pay per acre for the lease of the property?

No money would be exchanged with the proposed lease, as it would be an agreement between two State of Michigan departments.

Why only prohibit training during deer season? What about other activities (snowmobiles, side by sides, horseback riding, berry picking, mushrooming, fishing, grouse, small-game and bear hunting seasons?

Firearm season is very short in duration and many deer camps use the short-term lease lands for the entire length of firearm season. That is why it was singled out in the lease agreement. The DNR understands that all game seasons are important to hunters and anglers.

Does the 1,500 feet from rivers buffer zone apply to proximity to lakes, streams and wetlands? How was the number decided? How can the DNR protect the Au Sable watershed?

The 1,500-foot buffer pertains to all bodies of water but does not include wetlands. A few numbers were suggested during discussions with stakeholders and local river groups, and 1,500 feet was selected as a reasonable distance. This number could increase during the review process. The AuSable and Manistee rivers both have Natural River Plans, and the DNR limits proximity on any intrusive activity.

When this proposal first came to light in June, one of the first and most commonly asked questions that MUCC heard was if this was a foregone conclusion that was just going to be rushed through. To the DNR’s credit, there exists a system for public comment but it is disheartening to hear that this proposal had been floating around for about six months before becoming widely known to the general public.

MUCC Director of Communications and Marketing Nick Green hunts grouse in the area, and he hopes that the Department realizes the people of Michigan are opposed to this expansion.

“A proposal of this size and scope should have been disseminated to the public at its inception, allowing more time for public comment and scrutiny,” said Green. “Hopefully the director concludes that the financial burden on the department is too high and the strain on the public trust resource too great.”

Natural Resources Commission Chairman Tom Baird said at the July meeting that members of the public should submit their comments on the proposed expansion to the DNR by the end of August. You can submit your comments to the department using their online map here.