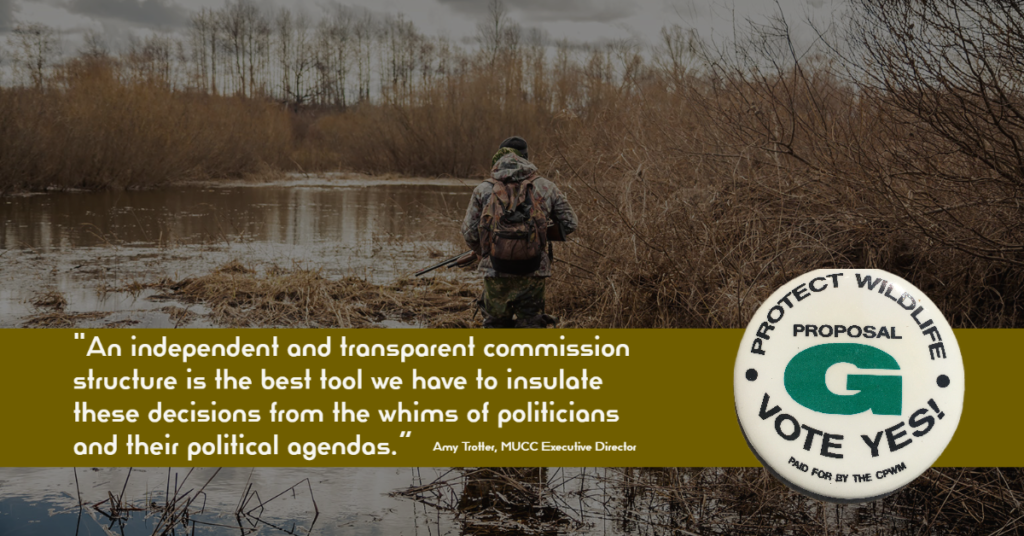 The intent of one of Michigan’s most sacred conservation victories is being challenged by the Michigan Department of Natural Resources (DNR).

Proposal G of 1996 was a legislatively referred referendum passed by about 69 percent of Michigan voters. It granted the Natural Resources Commission (NRC) exclusive authority over the taking of game and requires the commission, “to the greatest extent practicable, to use principles of sound scientific management in making decisions regarding the taking of game.”

The Natural Resources Commission is a seven-member, bipartisan body appointed by the governor. Prior to 2010, the commission was responsible for hiring the DNR director — a duty that now resides with the governor.

In February 2022, Michigan United Conservation Clubs (MUCC) learned that the DNR had provided NRC commissioners with a document titled What Tools Are Available and Who Has the Authority? This document outlined what DNR Director Dan Eichinger and the administration feel the authorities are of the NRC, legislature and director, separately.

Citing MCL 324.40107 (in statute prior to Proposal G), Eichinger has asserted department authority over the establishment of hunting seasons (subsequent to the first season established by the NRC), quotas and geographic boundaries.

It is important to note that fisheries issues are exclusively under the authority of the NRC as a result of the 2014 Scientific Fish and Wildlife Conservation Act.

MUCC and the conservation community assumed the intent of Proposal G of 1996 was for the NRC to have authority over matters like boundaries, quotas and seasons, said Amy Trotter, MUCC executive director.

“MUCC was founded to keep politics out of our conservation and natural resources management,” Trotter said. “An independent and transparent commission structure is the best tool we have to insulate these decisions from the whims of politicians and their political agendas.”

Why does it matter?

At a basic level, MUCC feels that the seven-member, bipartisan NRC is a better choice for complex, sometimes charged, issues, Trotter said.

“Given that the director is a single political appointment of the governor, there are huge implications allowing that person to control hunting seasons, quotas and hunting areas in a vacuum,” Trotter said. “Our hope is to work with the director or legislature to codify Proposal G’s intent for all Michigan conservationists that worked so hard to pass it.”

The DNR director establishing quotas and geographic areas allows circumvention, essentially, of seasons if the director so chooses. By setting quotas and areas, the director could determine where hunting is allowed and not allowed in Michigan.

MUCC is not only concerned about management decisions today but in the future, too, Trotter said.

“The processes we use today will only have compounding effects on our natural resources down the line as director appointments and sentiment towards hunting change,” Trotter said. “Ensuring that natural resources management decisions are not made unilaterally and that they are insulated from politics was a founding principle of MUCC. It will continue to remain at the forefront of who we are.”

An MUCC emergency resolution was written by Mindy Koch, former DNR deputy director and current president of the Michigan Resource Stewards, and passed by the MUCC Executive Board on April 13. MUCC announced its concerns to the DNR and the director formally on April 14.

“Presently, the commission and department are working together to further clarify some of those questions and are doing so in conjunction with the attorney general’s office,” the department sent in response.

The department was reached for comment on July 6, but it said the turnaround time for approvals on a quote was too quick.

MUCC has heard nothing further on the matter, and the commission has been operating similarly to how it did before the interpretation was made known.

Personal communications with former DNR executive office staff have shed light on knowledge of the former statute, but they felt it was in their best interest to work directly with commissioners to resolve differences rather than trying to override them. It is unclear why this administration chose to more publicly assert its authority.

MUCC will be watching closely and communicating with the NRC to ensure this continues until a collaborative discussion about necessary legislative updates can take place.

The agenda for the July NRC meeting can be found here. There are no new action items up for consideration.

A handful of land transactions appear on the agenda, MUCC only reviews land transactions exceeding 80 acres, of which there is one this month. Land Transaction Two is an acquisition of 80 acres in Chippewa County and is currently bordered on three sides by state land. MUCC supports this transaction.

MUCC will be live streaming the meeting on our Facebook page.