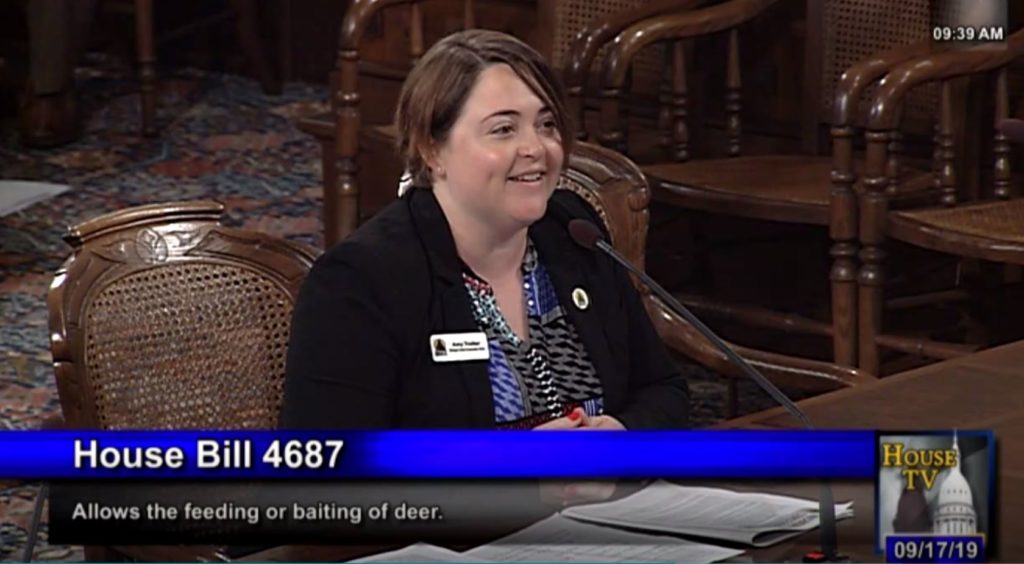 Baiting deer took center stage this morning as Ted Nugent passionately and candidly claimed he was not a scientist or biologist on the subject — but someone who lives with deer — in front of the House Committee on Government Operations.

Nugent, who testified next to Rep. Michelle Hoitenga (R-Manton) and Sen. Curt VanderWall (R-Ludington), used a myriad of social issues to prop up his claim that the ban on baiting is not founded in science and that House Bill 4687, sponsored by Hoitenga, should be passed.

HB 4687 mirrors SB 037, sponsored by Sen. VanderWall, and attempts to circumvent Proposal G, a 1996 ballot referendum, and the use of sound, scientific research to manage our game species by allowing the use of baiting and feeding for white-tailed deer in Michigan.

In total, the Michigan Department of Natural Resources has compiled 162 peer-reviewed, scientific articles to support their recommendations to the Natural Resources Commission (NRC) on the management of white-tailed deer in Michigan in the face of disease — particularly, chronic wasting disease (CWD).

This literature review, along with the 2017 Michigan CWD Working Group recommendations as well as the 2018 “Best Management Practices” released in 2018 from the Association of Fish and Wildlife Agencies, supports a prohibition on baiting and feeding cervids.

Nugent, Hoitenga and VanderWall did not provide any scientific literature or information to the committee to support the trio’s arguments.

“I have given you no opinions here today…if they [scientists] think they can stop deer from swapping spit, they’re idiots. I’d recommend they stay in the lab, wear their white jackets and shut up,” Nugent said. “Let people who live with the deer make decisions based on what the deer do.”

The NRC, through Proposal G, is responsible for determining the manner and method of take of game species in Michigan. The Legislature has granted the NRC the ability to regulate deer and elk feeding through statute. HB 4687 and SB 037 would rescind these authorities and allow the baiting and feeding of cervids to continue unregulated.

“We have clear and consistent science that shows baiting and feeding of white-tailed deer is a human factor that contributes to the spread of chronic wasting disease,” Trotter said. “Deer naturally congregate, MUCC doesn’t dispute that, but we can control congregating them over bait placed in the field by hunters.”

CWD is a prion disease that is transmitted through bodily fluids including saliva, feces, urine and blood. The incubation period of CWD is three years, so deer that are sick do not appear sick and can spread the disease. There is currently no known cure or vaccine, and the Center for Disease Control recommends people do not consume deer that test positive for CWD.

CWD is also considered an environmental contaminant because the prions bind to the soil and can then be transmitted to cervids.

MUCC has opposed baiting and feeding of white-tailed deer since 2007; but, it does support supplemental feeding in the Upper Peninsula during particularly severe winters. The organization reviews their policy positions at their annual convention each June using the best available information.

Michigan United Conservation Clubs supports the DNR’s recommendation and the NRC’s decision to forego baiting and feeding of white-tailed deer in the face of chronic wasting disease.

When asked about whether conservationists used bait, Trotter said that conservationists span all walks of life and all different types of hunting styles — from the weekend warrior to Ted Nugent.

“MUCC does not wish to criticize hunters who have baited in the past, but we feel it is our job as a conservation organization to help hunters understand the risk and educate them on new, legal methods of hunting,” Trotter said. “The health of our deer herd must come first so that the next generation of hunters are afforded the same opportunities we were.”

Michigan United Conservation Clubs is the largest state-specific conservation organization in the nation with more than 40,000 members and 200 affiliate clubs. MUCC is focused on uniting citizens to conserve, protect and enhance Michigan’s natural resources and outdoor heritage.

Posted in Policy and tagged cwd, deer baiting, michigan, Mucc, nugent
← 2019: Another Successful Year for OTGChecking in on our AmeriCorps Member →