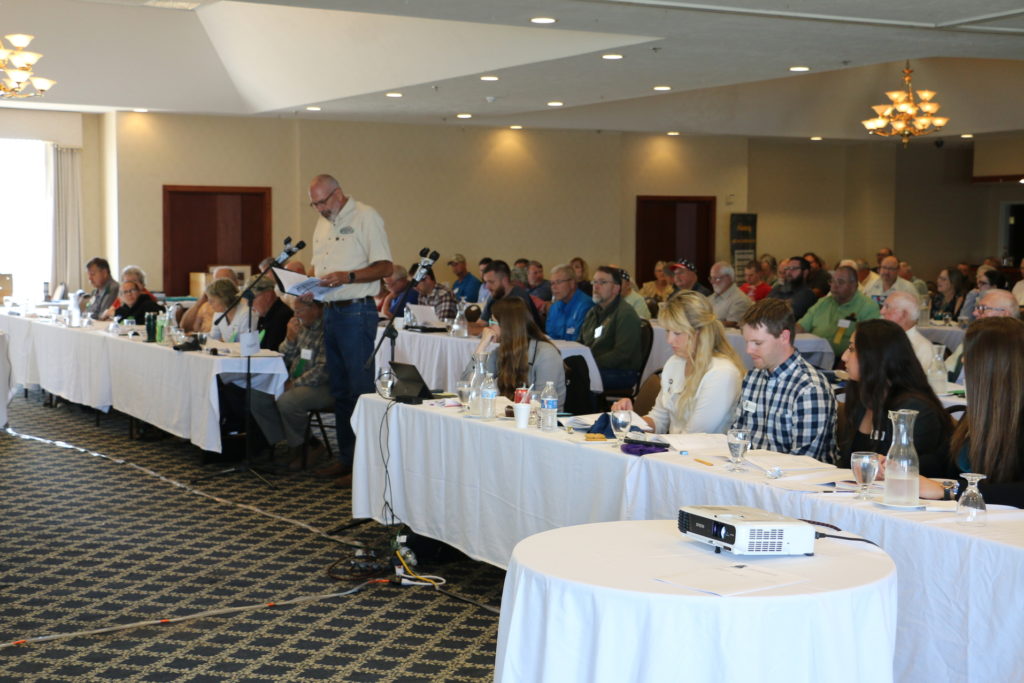 About 150 sportsmen, women and conservationists came together over the weekend to debate conservation issues facing the state and its wildlife at Michigan United Conservation Clubs’ (MUCC) Annual Convention. MUCC’s 82nd Annual Convention kicked off with an On the Ground project in the Backus Creek State Game Area and culminated on Saturday afternoon with the organization’s grassroots process on full display at the Lakeside Resort and Conference Center in Houghton Lake.

In total, 22 member-drafted resolutions were brought to the floor for deliberation. Of those, 16 passed through the body and were adopted as MUCC policy, five were voted down and one was withdrawn.

Some passed resolutions aim to broaden and sanction trap shooting as a high school sport throughout Michigan, call for research and solutions on PFAs issues as they directly relate to fish and wildlife, expand the hours that you are allowed to use artificial lights when deer hunting and create a set of criteria for Natural Resources Commission (NRC) appointments.

For a summary of each resolution, please visit our MUCC website. “Our Annual Convention is a time when our membership from all corners of the state can come together with one common goal in mind — conservation,” said Amy Trotter, MUCC executive director. “The true grassroots process and MUCC’s track record prove that there is no other state-specific conservation organization in the nation that achieves what we do.”

During the 2017-2018 legislative session, MUCC tracked 77 bills, connected with legislators on 63 of those bills, secured passage of 27 bills and helped to kill 13 bills. The organization carries this kind of weight in Lansing and nationally because of its member-driven resolution process.

“I know that when I step into a room with a legislator or an NRC commissioner, I am speaking clearly to the policies the MUCC membership wants to be enacted,” Trotter said. “We are the voice for conservation-minded sportsmen and sportswomen in Michigan.”

In 2019, the resolutions that received the most contention, and ultimately failed, were: the allowance of more rods for boating anglers; one buck tag per peninsula; the creation of an oversight committee for the State Parks Endowment Fund; mandatory deer registration after a deer is harvested; and the allowance of centerfire rifles in the limited firearm zone. Michigan Department of Natural Resources Director Dan Eichinger was in attendance to receive a commemorative plaque and tribute from the organization for the centennial celebration of Michigan State Parks. Eichinger was also the day’s keynote speaker. He talked about the importance of keeping invasive carp out of our great lakes, conservation being a team sport and how important it is to instill a hunting and fishing heritage in the next generation. He also introduced his son Payton, a fourth-generation MUCC member.

After a day of robust deliberation on resolutions, members joined together Saturday evening to honor those among them who have made significant contributions to conservation in Michigan at the 2019 MUCC Conservation Awards Banquet.

In total, nine award winners were recognized (please click the link to read why each winner was chosen):

Educator of the Year — Kari Roy

Volunteer of the Year — Alex Schaffer Welling Haughey accepted the Unsung Hero award from MUCC President George Lindquist. She spoke about her grandfather, a former DNR conservation officer, being killed by bear poachers in Michigan’s Upper Peninsula and a piece of forest that MUCC helped to dedicate in his honor.

Since her return to Michigan, Welling Haughey, now the DNR regional coordinator for the upper peninsula, has fostered and maintained healthy, working relationships between Yoopers and the DNR headquarters in Lansing — a job that no one would envy.

A  lifetime of service was also recognized when now-retired DNR Assistant Chief of Law Enforcement Division Dean Molnar stepped to the stage to accept his award.

“Dean truly exemplifies what it means to sacrifice family and well-being in the name of conservation,” Trotter said. “He would travel home to see ‘his bride’ on the weekends, while still helping to build a law enforcement division stronger than it has ever been.”

MUCC’s Annual Convention concluded on Sunday with three resolutions being voted on and an announcement on the results of the election of Executive Board and Policy Board members.

New/reelected MUCC Executive Board members include:

These board members will serve two-year terms, with the even-numbered regions up for election in 2020.

The 2020 MUCC Annual Convention will be in Sault Ste. Marie at Kewadin Casinos from June 26-28.

MUCC is the largest state-specific, nonpartisan, nonprofit conservation organization in the nation. Founded in 1937, our mission is to unite citizens to conserve, protect and enhance Michigan’s natural resources and outdoor heritage. This mission drives everything we do as an organization.

Posted in Policy
← MUCC’s Annual Convention: From a Newcomer’s PerspectiveThe Campers Have Arrived →