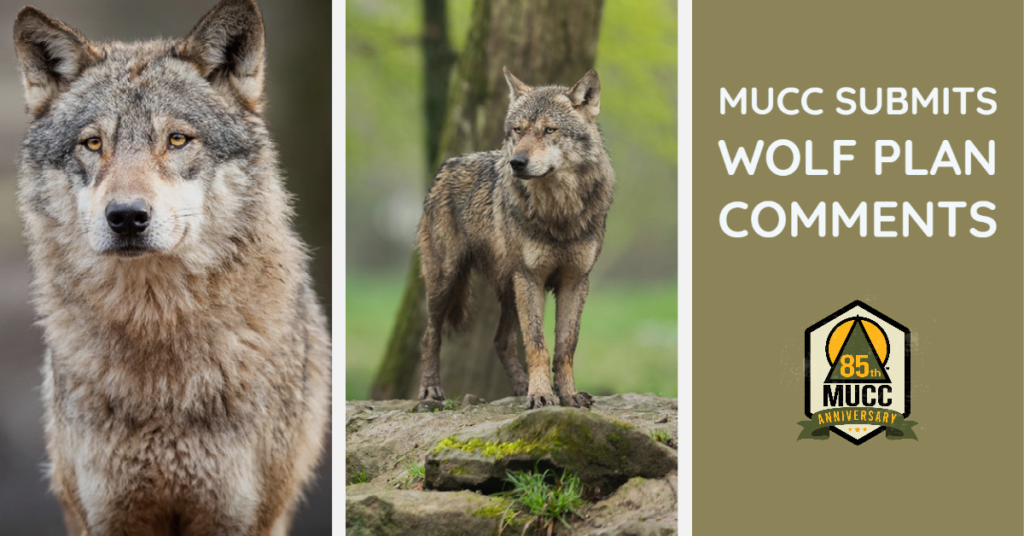 MUCC, representing its 40,000 members and 200 member clubs, submitted to DNR Director Dan Eichinger a series of recommendations to improve the plan for Michigan’s hunters, trappers, and conservationists.

The full letter can be found here.

Below is a summarized list of the recommendations MUCC makes to the plan:

The term socially responsible appears in the draft numerous times. MUCC believes that this term should be struck from the document in every occurance. The term is ambiguous, subjective, and is already better addressed in current, long-standing rules on methods of take.

Similarly the use of “recreation” in terms of wolf management is objectionable, for similar reasons as above. The term recreational is another use of a subjective term in what should be a science-based management plan. MUCC’s strongest objection to the term lies in section 6.12.2. of the draft that refers to a potential public harvest of wolves for “recreational and utilitarian purposes”; however the plan’s action items would be better suited if it instead read: “management and utilitarian purposes.”

DNR, stakeholder and media communications continue to give the impression that the population number is a flat and verifiable 695.

MUCC strongly urges the DNR to document the practice of evaluating methodologies within the plan and include an action item in response to the WMAC recommendation (#2) that the:  “Department pursue a third-party evaluation of the methodology of the wolf survey on a regular basis.”

Based on the WMAC public testimony, there is little public support from hunters and conservationists to enhance penalties when wolf conflicts cannot be managed legally, even when attacking dogs or livestock. The Action under 6.3.3 could be amended to support a triggered higher penalty, at a similar level to other big game species, that only goes into effect during the time wolves are not classified as an federal or state endangered species and are managed as a game species.

The 2022 Draft Plan fails to acknowledge a recommendation from the WMAC for a dedicated 24-hour phone service for reporting wolf encounters (#3) or a rapid public awareness system for verified depredation events (#22). Public input to the WMAC would indicate that the current system is NOT working for the members of the public as the DNR might assume.

Simply enacting the same email notification system as Wisconsin, as the WMAC recommended (#22), would be free as it relies on the same system for all other DNR notifications.

The value of a wolf season could also be measured in a survey to assess the impact of wolves on tourism and recreation. However, the DNR ignored this recommendation of the WMAC (#27) completely. The only way that the DNR can adequately inform the public as to the benefits is if there are quantifiable metrics and there is nothing in the plan to attempt to quantify those benefits. MUCC requests that this recommendation be reconsidered for inclusion.

Additionally, it is acknowledged within the plan that the Native American cultural beliefs outlined in 6.8 is only one example. The DNR should strive to include additional cultural perspectives of Michigan residents.

Action 3 should be changed to remove concerning language and insinuation that the population cannot sustain a hunt and read instead as:

In preparation for a durable delisting of wolves, develop recommendations to the NRC to offer opportunities for the public to harvest wolves for management and utilitarian purposes while sustaining a biologically viable wolf population.

Members of the public have until August 4th to submit their comments on the plan which can be done on the DNR website here.