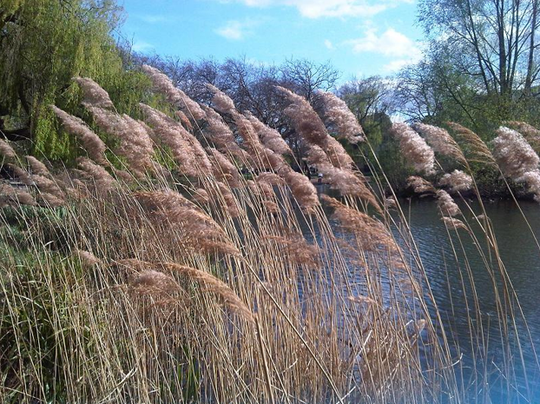 MSU’s aquatic field guide describes non-native phragmites is a “stout, colonial, perennial grass ranging in height from 1.8-3.9 m
(6-13 ft). Inflorescence a dense branched cluster on the bearded axis at the end of each stem; becoming open and feathery at maturity. Stems dull yellowish; usually covered by the leaf sheath. This invasive species habitat is in wetlands, stream, river and lakeshores, ditches and depressions, this species can tolerate high levels of road salt and nutrients. And it reproduces through the spread of rhizomes, seed, and fragmentation.” 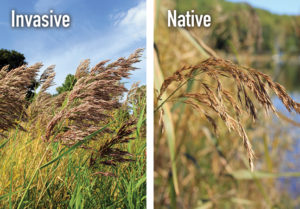 According to Minnesota DNR, “Non-native Phragmites originated in the Middle East and is native to Europe and Asia. The species was unintentionally introduced into the United States’ Great Lakes through contaminated solid ballast of cargo ships or with packing material from shipping operations. It was also intentionally introduced in some locations to filter water in wastewater treatment lagoons. It was first discovered in the United States along the east coast between the late 1700s and early 1800s. Over the course of the 20th century, it has spread across the entire continent, invading wetlands, lakeshores, streambanks, and marshy areas.” This invasive species is widespread throughout Michigan and continues to thrive in habitats where there are no natural predators to keep the population in check. 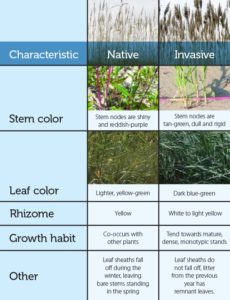 Color: Side by side, the leaves of the invasive appear bluish, while native leaves are more yellow (this determination is difficult to make when you only have one haplotype at hand); live stems of invasive are dull green, whereas native stems frequently appear reddish or purplish.

Ligule length: Non-native ligules are approximately half the length of native ligules (0.1-0.4 mm for invasive haplotype compared to 0.4-1.0 mm for native).

Density: Stands of non-native Phragmites are typically very large, tall, and dense (i.e. hard to walk through easily) while native stands are usually integrated with a more diverse plant community and not as dense.

control method and the first step toward effective control. After the initial herbicide treatment, one or more follow-up methods at each site are recommended, such as prescribed fire, mechanical treatment, or water level management. These follow-up methods will not only help provide multiple stresses on the plants but also will prepare the site for subsequent years’ herbicide treatments.

On the Water’s funding from Consumers Energy’s Planet grant comes to an end this September. If you like what

OTW is creating and want this program to continue please let us know! OTW unquestionably wants to advance as a program, connect and form partnerships that improve watersheds around the state of Michigan, but we can’t do this without your support.