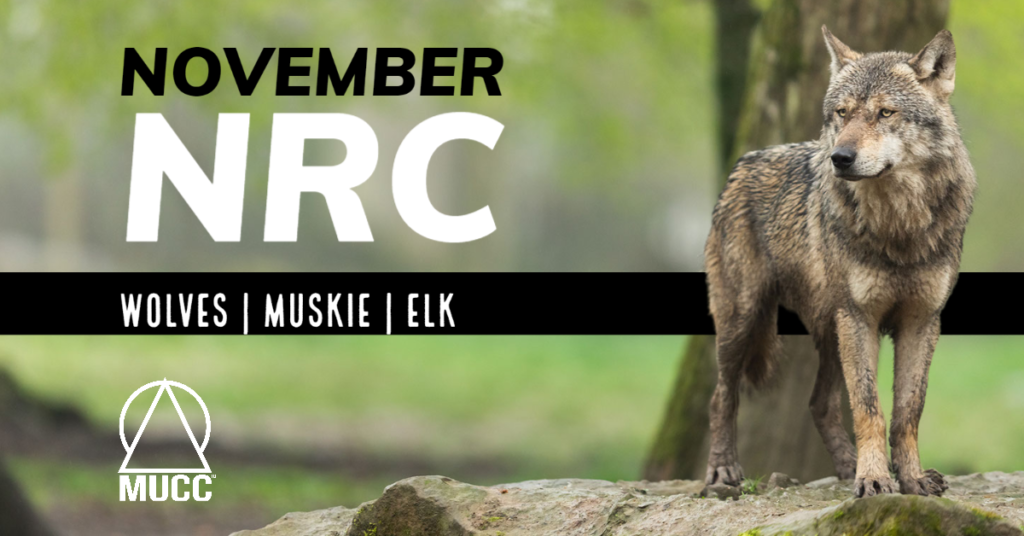 The finalized version of the 2022 Wolf Management Plan was presented to commissioners at the November Natural Resources Commission (NRC) meeting.

The plan was modified from a previous version to include marginal improvements to language as it relates to management of wolves when they are federally delisted again.

Michigan United Conservation Clubs (MUCC) Executive Director Amy Trotter said that MUCC’s policy remains in support of state management of wolves, including the use of hunting and trapping as a management tool.

“The term recreational hunting has been tarnished by those seeking to undermine the value of wolf management,” Trotter said. “Wolves have fully recovered and that should be considered a conservation success story. MUCC has long supported sustainable management of wolves through hunting and trapping just like any other species.”

MUCC was joined by a litany of conservation organizations via written and in person testimony asking the commission to establish the framework for a wolf hunting and trapping season.

The 2022 Draft Elk Management plan was also presented to commissioners by Department of Natural Resources Deer and Elk|Specialist Chad Stewart. The plan is largely similar to the 2015 version, with no major changes to the state’s management approach of elk.

Commissioners took action on a pair of fisheries orders tabled at the October meeting.

Fisheries Order 206.23 is a series of warm water regulations applicable across the state. Commissioner Cozad offered an amendment to the order to remove a proposed change to the muskellunge size limit on the Cisco Chain of lakes in the Upper Peninsula.

MUCC has a policy to oppose restrictions on opportunity without a sufficient biological need. The DNR has said there is no biological justification for proposing this change, and as a result, MUCC opposes the change in muskellunge size limit on these bodies of water.

Both the amendment and amended order passed on a 4-2 vote.

Fisheries order 210.23 set trout regulations on various bodies of water. Commissioner Cozad offered an amendment to this order as well, which proposed to leave an unnamed tributary of the Coldwater River as a trout stream and the Pigeon Creek in Ottawa County to remain a trout stream.

The order was tabled until the December meeting for commissioners to continue to gather more information.

The last order up for action this month, Wildlife Conservation Order Amendment #5 of 2022, set spring turkey regulations for the next regulatory cycle. The order changes the season structure in Unit E, combining the first and second hunts into a single two week hunt. The order passed unanimously.

Dog trackers may soon be able to track wounded deer off lead thanks to a resolution from Commissioner Creagh. The resolution requests the DNR to prepare an order for the upcoming deer regulatory cycle that allows certified deer tracking dogs to work off-lead. MUCC has a policy position supporting this change to the Wildlife Conservation Order. The commission approved the resolution unanimously.

There were nine land transactions on the agenda, MUCC policy is to review all transactions exceeding 80 acres. This month there is one exceeding that threshold. Land Transaction Case #20220064 is a purchase of 520 acres that borders multiple state-owned properties and would bring the remainder of Fulmer Lake shoreline into state ownership.

Preceding the meeting was the newly-formed NRC Policy and Governance committee, of which MUCC executive director Amy Trotter, and MUCC Board President Tim Muir were the first presenters.

MUCC presented resolutions passed at its Annual Convention, most importantly the resolution reaffirming MUCC’s commitment to an independent and transparent Natural Resources Commission. All the resolutions can be found here.

A politically insulated and independent NRC was the founding issue for MUCC, and it continues to be the driving force of the organization, MUCC President Tim Muir said.

“This is an issue that continues to motivate and unite our membership and our organization,” Muir said. “MUCC will remain committed to protecting natural resource management from political pressures, this is a hill we will die on.”

The last commission meeting of the year is Thursday, Dec. 8, 2022 at Lansing Community College.