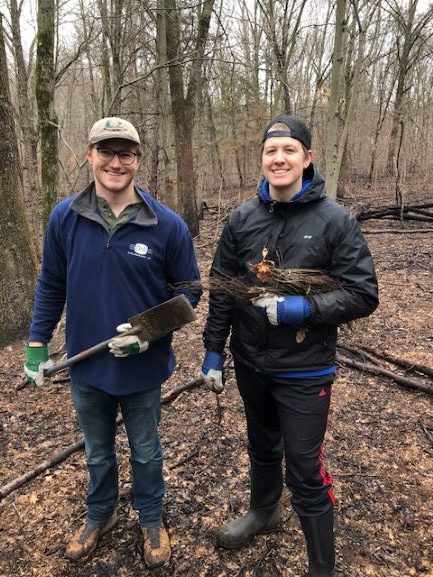 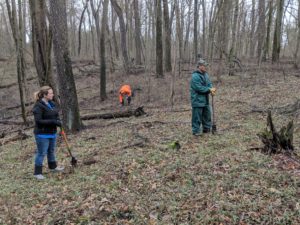 Wildlife biologist, Randy Heinze, manages the Barry State Game Area near Hastings, MI. Recently, Randy organized a prescribed burn on a 100-acre woodlot in the game area. The purpose was to clear up 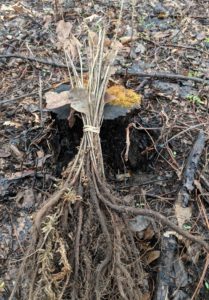 the duff layer and other woody brushes to allow a better growing opportunity for several species of oak trees. Oak trees produce a hard mast that is beneficial to wildlife in the area. They produce acorns which are rich in nutrition for many animals. Oak loving animals include whitetail deer, turkeys, squirrels, chipmunks, wood ducks, rabbits and many others.

After everyone had arrived, we did a short introduction and explained the project to the volunteers. Randy had purchased 5,000 oak tree saplings with the intention of planting about 800. Each volunteer grabbed a spade (tree planting tool) or a shovel and marched off with several bundles of saplings under their arms. With all 22 volunteers in the woods, plus MUCC and DNR staff, we covered a lot of ground. Each volunteer was informed on how to properly plant the saplings because the root systems of the oak saplings might not grow as well if not placed in the ground strategically. After 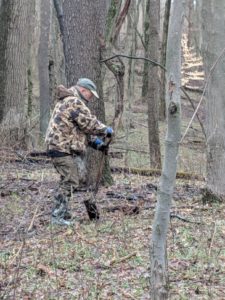 a short lunch break, the majority of the volunteers worked until 2 pm, bringing our total numbers of oak trees planted to be around 3,900. This number exceeded the projected 800 saplings we had set at the beginning. This type of dedication and hard work does not go unnoticed and the oak tree survival rate ultimately increased due to those efforts by our volunteers.

Thank you to Randy, Pfizer and Charles River Laboratories. Another special thank you to the Consumers Energy Foundation for not only providing volunteers but also for providing funds for the project. Each volunteer contributed directly to wildlife habitat on public lands. OTG hopes to build many more partnerships with other organizations and companies in the future.