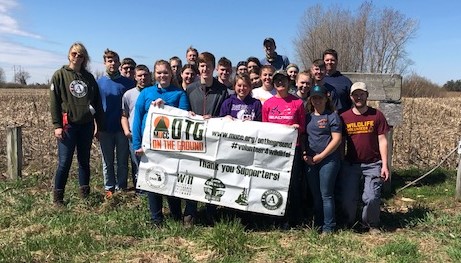 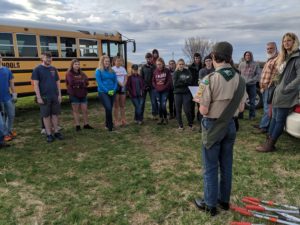 Thursday morning, April 25th, Shaun and I were joined by the Reese Outdoors Club out of Reese High School at the Denmark State Game Area. The club focuses on teaching kids about our natural resources and how to get involved in conservation and fun outdoor recreational activities. The club has been around since 1993 and was started by Matt Lefler, a science teacher out of Reese High School. It is great to see clubs like this engaging and educating the youth on our states natural resources.

As the big yellow school bus rolled into the Denmark State Game parking lot, 19 kids from the Reese Outdoors Club walked off the bus with excited faces. Soon after their arrival, we were joined by a Boy Scout. He presented to the group of kids and talked about how to identify the invasive autumn olive brush and how to dispose of it. This was valuable information because identifying plants can be tricky. It is always a good idea to know what you are cutting before you cut; better an invasive than a native. 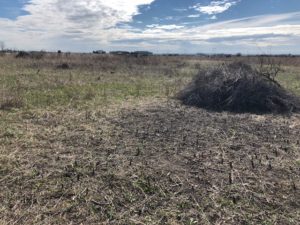 From there, wildlife technician Tim out of the Cass City DNR office was there to direct us towards the project site. The site is managed for pheasant habitat which is predominantly grasslands. The grassland site, however, had a few too many woody brushes growing. The three chaperones and 19 kids got to work with loppers, hand-saws, and clippers, cutting and piling up the woody brush. The students worked hard and were able to clear a substantial amount of woody brush from the grassland habitat, they also had fun doing it. 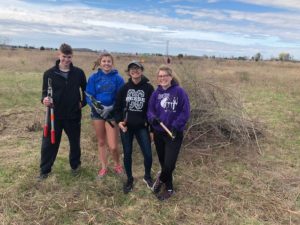 On top of that, I had the opportunity to share the career path I took to a few curious high school girls. They are approaching their senior year and knew that they wanted to do something for the outdoors, so they asked me about natural resource degree options. By the end of the project, the volunteers were able to impact approximately seven acres of pheasant habitat at the Denmark State Game Area.

The kids then filled their mouths with pizza and bragged about the biggest branch they cut and were soon on their way to another project site. Thank you to the Reese Outdoors Club for your continued efforts in educating and engaging the youth, and for your involvement in OTG Jr.