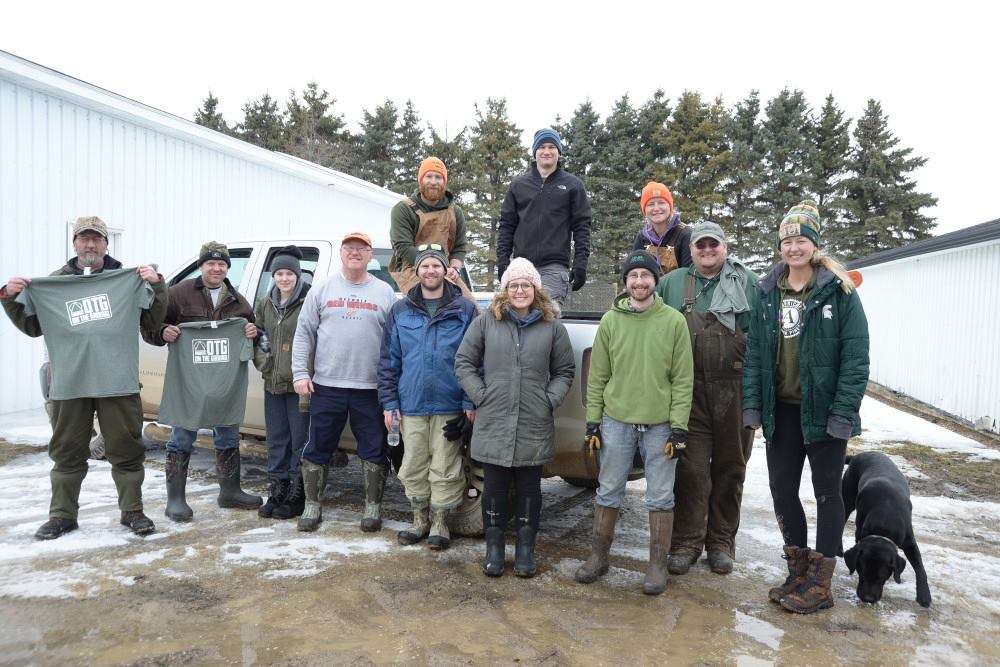 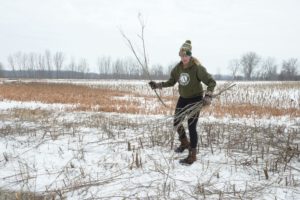 Any type of waterfowl in the St. Johns area trying to find a safe place to land, eat and nest, should benefit from the habitat work done by the OTG crew on the Maple River State Game Area (SGA), Saturday morning (February 23rd). This game area is located just north of St. Johns and is divided into several management units/areas. Each unit/area is managed for a specific habitat type, that will benefit the animals that use and live in that area. There are parts of the Maple River SGA that are managed for deer and turkey. This last OTG project, however, focused on two waterfowl units specifically, unit’s X and D. Both units are diked and normally flooded during the fall hunting season.

The Wildlife Technician that covers the Maple River SGA, Chad Krumnauer, expressed that the units would need to be managed before the upcoming waterfowl hunting season. The dikes along both units had been somewhat overtaken by woody brush. Some woody brush patches along the dikes do offer great cover for waterfowl hunters. The dikes surround planted corn in unit’s X & D. However, with the woody brush as cover, all the deer have to do is eat the corn and then bed within the woody brush. This left the corn somewhat depleted for the birds and bird hunters. Units X & D are managed for waterfowl, therefore there needed to be some type of management done to benefit the waterfowl and waterfowl hunters that use those units. Unit X is open to hunters during the hunting season, unit D is specifically managed as a waterfowl refuge and is not open to hunting between September 1st and December 1st. 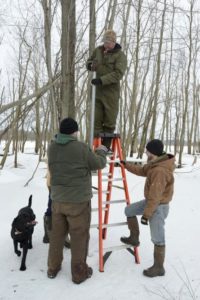 Originally the date of the project was to be earlier but due to the rain and warmer weather we had around the middle of February, it was not safe for our volunteers to be crossing dikes. Before any project, we make sure that all conditions are safe for our volunteers and staff. For the rescheduled date, nine volunteers, DNR and MUCC staff, gathered together on a Saturday morning to listen to Chad Krumnauer and his seasonal tech talk through the management plan. With the dikes being completely frozen over, the goal within unit’s X & D was to cut down as much woody brush as possible along the dikes and stack the branches in piles off to the side of the units.

After the management plan was addressed we split up into two groups, one headed to unit X the other to Unit D. Myself and fellow MUCC staffers, Shaun Mckeon & Hunter Salisbury, along with three other volunteers set out for unit X. One volunteer had experience handling a weed whip with a metal attachment and while wearing the necessary PPE she was able to power through the woody brush along the dike. As she went along, the others and I were using loppers to pick off any remaining branches and then stacked them off along the unit. After two hours of hard work, there only remained a small enough patch of woody brush for hunters to use for waterfowl hunting. The other group in unit D cut down woody brush along the dike as well, but they also placed poles into the ground for future wood duck nesting boxes within the refuge.

I was personally impressed with the diversity of our volunteers. We had several people from a local club, 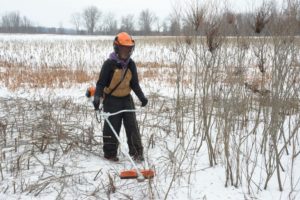 Maple River Wildlife Association, Shaun is also a member of that club. We had a gentleman from Michigan Trapper and Predator Callers Association who brought his teenage daughter to the project. Outside of DNR and MUCC staff, we had a few people that were not part of any hunting/fishing clubs but love the outdoors and wanted to help. That’s one of the benefits to OTG, uniting people under one common love for the outdoors. We ended the day eating jets pizza and reflecting on the day’s work, while I handed out free OTG t-shirts. We hope to see YOU at the next OTG project!