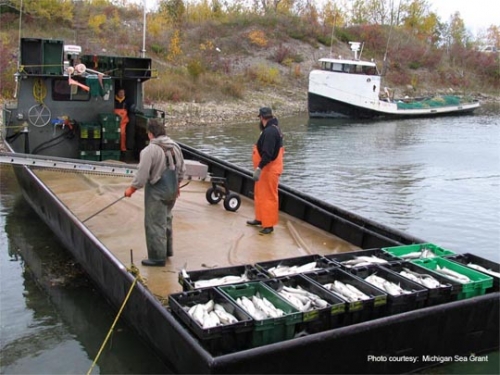 On June 20, Sen. Kevin Daley (R-Lum) introduced SB 389. This Senate bill removes certain authorities of the Department of Natural Resources to regulate the commercial fishing industry and allows the bycatch of game fish. Last week, Rep. Sara Cambensy (D-Marquette) introduced HB 4790 which is a companion bill in the House.

MUCC and its partners oppose this pair of bills which would allow the harvest of lake trout, yellow perch, walleye and other game fish for commercial fishing operations. These sport fish are planted, reared and/or managed by sport, or recreational, angler monies through fishing license sales and the Dingell-Johnson Act.

These bills also help to ensure that state-licensed commercial fishing operations are held responsible for the harvest and selling of game fish and require them to report the location of their nets. The Michigan Department of Natural Resources supports these bills and is working with MUCC on amendments and bill language.

Michigan sport anglers bring in about $2.3 billion to the state’s economy annually, according to a report by Michigan United Conservation Clubs. The dockside value of the commercial fishing industry was estimated at $5.4 million in 2015, according to an annual report by the Michigan Department of Natural Resources.

Bryan Burroughs, executive director of Michigan Trout Unlimited, said the economic risk of not updating our current commercial fishing statute is one that his organization and recreational anglers should be aware of.

“Michigan hosts nearly 1.5 million recreational anglers annually, with the second most out-of-state anglers in the country.  These recreational anglers pay for the conservation and management of our fisheries, and they turn each fish caught into a high-value economic proposition for the state through their dedicated angling expenditures throughout Michigan’s local economies,” Burroughs said. “Updating these commercial fishing regulations and keeping sought-after gamefish protected is imperative and just plain good business for Michigan.”

Michigan’s commercial fishing regulations have not been updated since the 1970s. According to the Michigan Department of Natural Resources (MDNR), there were 171 commercial fishing licensees in 1970 that harvested 16.4 million pounds of fish.

Commercial fishing also plays an integral role in how the state manages its fisheries with respect to the 1836 Treaty Waters of the Great Lakes. Being proactive on this issue is important as the state and Coalition to Protect Michigan Resources enter the 2020 Consent Decree negotiations — a process that will affect our state’s fisheries, both sport and commercial, potentially for many years to come.

At this year’s Michigan United Conservation Club’s 82nd Annual Convention, a resolution passed the body of 108 voting delegates to support updating the statute for commercial fishing.

Amy Trotter, executive director of Michigan United Conservation Clubs, said updating the outdated statute will place Michigan, its anglers and our fisheries in the best possible position moving into the upcoming negotiations.

“The forthcoming negotiations are driving the urgency to get this legislation completed this year, and MUCC will be working hard to protect our sportfishing heritage in Michigan,” Trotter said.

We need YOUR help in preventing game fish from being commercially harvested. Contact your state senator and representative to oppose SB 389 and HB 4790, and voice your support for HB 4567-4569.