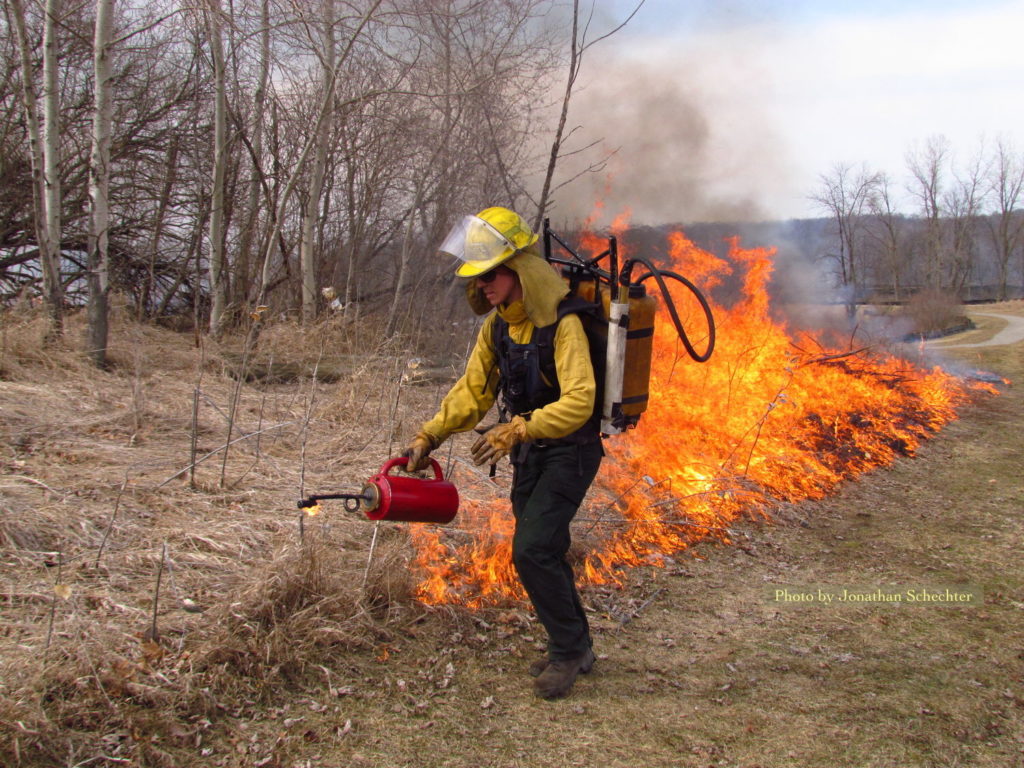 A Brief History of Fire in Michigan

Despite being best known for its abundant forest and water resources, Michigan’s natural history has also been molded by fire. Many fire-adapted ecosystems like jack pine forests, oak savannas and grasslands all rely on fire for optimal health and regeneration. Before the European settlement of the region, these ecosystems burned regularly from naturally-occurring fires or those started by Native Americans. However, fires grew notoriously damaging and deadly in various regions of the state during the early years of European settlement, and efforts to quell the dangers of out-of-control wildfire became the main priority of many land management agencies.

While starving the land of fire certainly had its benefits to a growing human population in the state, many fire-adapted ecosystems began to be snuffed out in tandem with the absence of the fire needed to sustain them. As our knowledge of these ecosystems grew, it became clear that the services provided by them and the unique flora and fauna associated with such habitats required diligent management.

Prescribed fire was introduced as a management tool for these ecosystems and provided natural resource agencies with the opportunity to both care for fire-adapted habitats and control burns so that they were less dangerous to humans. The value of prescribed fire is not to be underestimated, for its safe and proper application in the field of habitat management can provide a rare win-win scenario for humans and wildlife alike.

Despite the many benefits of prescribed fire, many people remain wary of its use. Citing concerns of out-of-control flames, abundant smoke and the sometimes desolate appearance of the landscape following a burn, members of the public often do not approve of the use of fire for public land management. However, with increased education and outreach by the agencies and professionals that carry out these prescribed burns, a growing number of Michiganders are embracing the many benefits associated with having fire back on the natural landscape.

Get to Know the Michigan Prescribed Fire Council

Founded in 1999, the Michigan Prescribed Fire Council (hereinafter, Fire Council) was formed to unite individuals involved in the profession or study of prescribed fire so that information could be easily shared and partnerships could be made throughout the field. Additionally, the Fire Council exists to protect, conserve and expand the safe use of prescribed fire as an ecological management tool in Michigan and across the country.

The value of prescribed fire as a management tool continues to grow for Tribal, federal, state and non-profit land managers. As public understanding of prescribed fire also grows, private landowners are beginning to apply prescribed fire treatments to their lands to improve the health of their property. Thus, many individuals rely on organizations like the Fire Council as a resource for information about when, how and why prescribed fire can be used.

This organization brings together various forms of professional expertise in the field of fire and habitat management and pools together an abundance of resources for those interested in learning more about prescribed fire. Additionally, the Fire Council promotes continued advancement of the field of fire science so that prescribed burns will continue to be carried out by highly-trained and knowledgeable professionals. Membership to the Fire Council is open to those individuals, organizations and agencies interested in using prescribed fire as an ecosystem management tool in Michigan, and members are encouraged to be involved in Fire Council workshops and meetings.

To learn more about the Michigan Prescribed Fire Council and how you can get involved, please visit their website HERE.

To learn more about the role of prescribed fire as a land management tool in the state of Michigan and across the country, please consider the following resources: