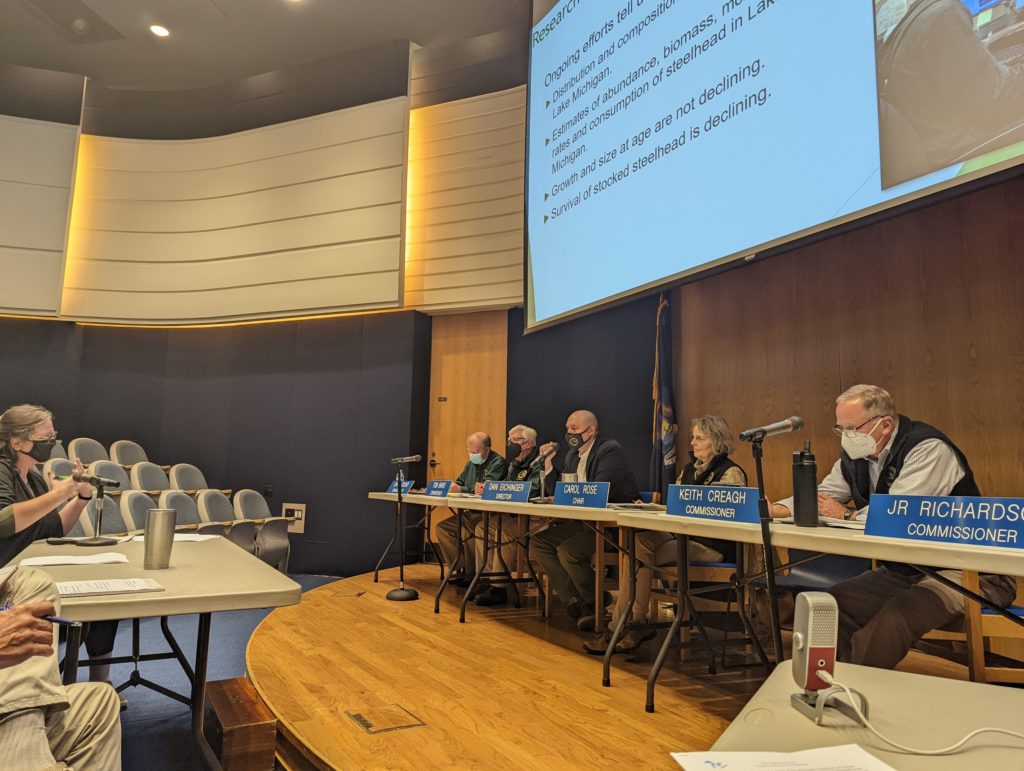 About 50 members of the public and department attended the meeting. Public comment centered around the reduction in steelhead bag limits, an amended fisheries order opening up the Saginaw River to angling during the walleye spawning season and sandhill crane management in Michigan.

Seeing a large turnout for the meeting was encouraging for conservation advocates and stakeholders, said Amy Trotter, MUCC executive director.

“Engagement in Michigan’s conservation arena takes many different folks with diverse interests,” Trotter said. “Showing up and voicing your support, concerns or questions regarding amendments and proposals is the most tangible way to ensure our outdoor heritage is protected in perpetuity.”

DNR Forestry Division staff presented regarding a proposed firearm use closure at the North Pioneer Road Shooting Area in Benzie County. The department cited ongoing and consistent safety concerns, including multiple bullets striking domiciles in the area of the proposed closure. One building struck was almost one mile away.

MUCC prioritizes the safety of shooting ranges and shooting areas, and the organization has no formal position on the closure of the North Pioneer Road Shooting Area. However, the closing of public lands and state game areas to recreational shooting has started to trend upward, and MUCC has concerns about the processes used to determine closures.

“Recreational shooters and the excise taxes derived from their activities have proven to be a linchpin in Michigan’s 21st-century conservation movement,” Green said. “The DNR needs to be thorough and transparent when considering range and shooting area closures moving forward, and stakeholders need to be a part of the process.”

DNR Fisheries Division Assistant Chief Todd Grischke started the DNR presentation noting several key points for the department, including “[The DNR] does not believe immediate action is warranted to save our steelhead populations from imminent collapse.”

During the presentation, DNR Lake Michigan Basin Coordinator Jay Wesley noted that “declining catch rates [are] related to lower lake productivity and highwater trends.” In the department’s opinion, the issue with lower steelhead recruitment lies in Lake Michigan not over-harvest of steelhead in river systems, and current and available habitat is saturated to its carrying capacity for spawning steelhead in streams, Wesley said.

DNR Fisheries Research Biology Specialist Jory Jonas said her theory is that smolt mortality is impacting steelhead populations at a much greater level than harvest of steelhead –– reaffirming an earlier point from Wesley that many Michigan steelhead anglers already utilize catch-and-release practices with about 80 percent of anglers only keeping one steelhead.

MUCC has no official position on the matter. The MUCC Fisheries Committee submitted a letter of concern to the NRC regarding the amendment.

Members and representatives of the Lake St. Clair Citizen’s Fisheries Advisory Committee and Lake Huron Citizen’s Fisheries Advisory Committee spoke in opposition to commissioner Nyberg’s proposed amendment to lower steelhead bag limits to one on select streams. Specifically, they cited mandating regulations with no clear biological impact and the traditional process fisheries regulations have gone through.

Frank Krist, from the Lake Huron Citizen’s Advisory Committee, submitted comments regarding commissioner Cozad’s amendment opening up walleye fishing during the spawning season on the lower Saginaw River. He wrote that his group’s main concern is with last year’s catastrophic dam failures and what effect, if any, that will have on the walleye fishery. Krist said this amendment needs to be tabled until there is a better understanding of the effect of the dam failures.

Several fishing guides and a member of Fly Fishers International, Great Lakes Council testified in support of Nyberg’s amendment, citing declining steelhead populations and what they are seeing on the river daily.

Brian Pitser, owner of The Northern Angler fly shop in Traverse City and a fishing guide, asked the commission to consider a salmon or steelhead tag that would fund the DNR’s research of salmon and steelhead so that management decisions based on data can be made.

Two members of the public spoke in opposition to hunting sandhill cranes in Michigan.

Chris Hillman, a member of the Maple River Wildlife Association (a chapter of the Michigan Duck Hunters Association), testified in support of a sandhill crane hunting season, citing the recovery of wood ducks and canada geese as examples of hunters and hunting working to bolster populations through the North American Model of Wildlife Conservation.

The commission voted to table FO 200.22 (steelhead bag limits) until the December meeting so that commissioner Nyberg can be present for the discussion surrounding his amendment.

FO 202.22, related to special hook size fishing regulations, was passed by the commission.

FO 204.22, which redefines a downstream boundary of the Little Manistee River and removing the Torch River muskellunge spawning closure, was passed by the commission.

Commissioner Cozad provided an amendment to FO 206.22 that would open the lower Saginaw River from Center Rd. downstream to the mouth for walleye harvest during the spawning season (March 15 to the last Saturday in April).

The commission ultimately voted to table 206.22 until December so that more stakeholder and public input could be considered.

The next meeting of the NRC will be December 9 at the Michigan Library and Historical Center Forum at 9 am.