The state of Michigan has 19.3 million acres of forested land that covers 53% of the state. As stated in Michigan’s terrestrial invasive species management plan, 96,000 jobs and over $20 million dollars is added to Michigan economy through forest-based industries and tourism/recreation. Forests are tremendously beneficial to all Michiganders. Which is why the threat of invasive insects is so great.

An invasive species is defined as a non-native organism that negatively impacts the environment in which it inhabits. Unfortunately, Michigan has or is at risk for many invasive species that have the potential to kill many of our tree species. Two of the most damaging are the emerald ash borer and oak wilt.

What is an Emerald Ash Borer? 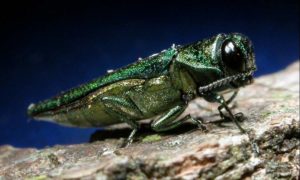 Emerald Ash Borers are bright metallic green exotic beetles that were discovered in Detroit in 2002. Through the transport of solid wood packing materials on cargo ships and airplanes, Emerald ash borer was introduced to the United States from Asia. Since Ash trees in the United States have no immunity against EAB, over 700 million ash trees could potentially be killed. Since its discovery in 2002, EAB has killed over 30 million trees in southeastern Michigan alone.

The THREAT of EAB! 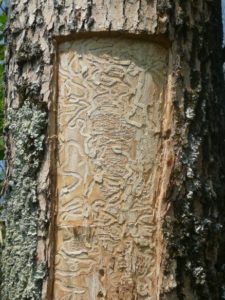 An adult emerald ash borer feeds on the foliage of ash trees until a female is reading to lay her eggs. A single female can lay between 90 to 200 eggs in the cracks of an ash trees bark. After 3 weeks, the eggs hatch and larvae begin to eat their way into the cambial layer (just under the bark). The larvae continue eating and growing under the bark for 1 or 2 years, creating tunnels that are displayed in an s-shaped pattern. In autumn, larvae will create a chamber for themselves inside the tree. They stay in this chamber over winter and pupate in the spring. During the spring, adult emerald ash borers begin emerging from the tree and leaving a distinct D shaped hole upon their exit.

Emerald Ash Borers larvae are the most damaging to ash trees. As they live inside the cambial layer, they feed on the tissue of the tree that supplies nutrients and water. Eventually, if there are enough galleries of larvae, the tree will not be able to get the proper nutrition, causing it to die.

What is Oak Wilt?

Oak Wilt is an invasive fungus harming Michigan’s red oak trees. White oak trees are also impacted by oak wilt but have a resistance to the fungus which 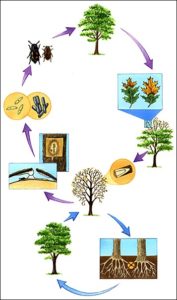 gives them a much better chance of survival. Oak Wilt can infect other red oak trees in two different ways:

2) By a sap-feeding beetle that carries the fungus spores to new trees.

The fungus blocks the water conducting channels of a tree and results in dehydration that leads to death. Any form of tree wounding such as pruning, tree climbing spikes or anything that damages the tree and exposes flesh, can make oaks susceptible to Oak Wilt. The loss of oak wilt can have a significant negative impact. In Michigan forests, red oaks are an important producer of acorns for wildlife ecosystems. The Michigan Department of Natural Resources used the Forest Inventory and data and the current price for red oak logs and determined that the value of red oak timber in Michigan is 1.6 billion dollars.

If you notice browning leaves or a large number of leaves falling in the summer, contact the Michigan Department of Natural Resources Forest Health Divisions at DNR-FRD-Forest-Health@michigan.gov or by phone at 517-284-5895.

What YOU can do?

Humans are partly responsible for the spread of both oak wilt and emerald ash borer. Since both invasive species thrive on trees, the movement of firewood is the number 1 way they invade new places and kill more trees.

Do not move firewood! Buy it where you burn it!

Read more about how you can protect oak trees HERE