Sea lamprey are cartilaginous, jawless fish that are generally marine and ascend freshwater rivers to spawn. “Sea lampreys are unique from many other fishes in that they do not have jaws or other bony structures, and instead possess a skeleton made of cartilage. While sea lampreys resemble eels, they are not related and are set apart by their unique mouth: a large oral sucking disk filled with sharp, horn-shaped 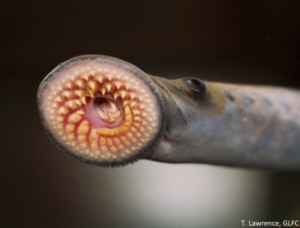 teeth surrounding a razor-sharp rasping tongue.”(Great Lakes Fisheries Commission) They attach to their prey as a parasite and feed on the bodily fluids of there prey often killing them in the process. This species has remained unchanged for centuries and had survived through four major extinction events.

Sea lamprey originates from the Atlantic coast from Labrador to Gulf of Mexico, Florida and the Atlantic coast of Europe and the Mediterranean Sea but have made their way into all five of the Great Lakes as well as some tributaries in Illinois, Indiana, Michigan, Minnesota, New York, Pennsylvania, and Wisconsin.

Another invasive species that are in the Great Lakes is Round Goby. This species has a negative effect economically and ecologically but on top of that is poses a special threat to anglers because “once established, populations typically increase quickly. The Round Goby can displace native fish, eat their eggs and young, take over optimal habitat, spawn multiple times a season, and survive in poor quality water — giving them a competitive advantage.”(MSG) 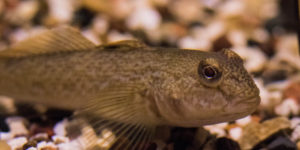 Round Goby can also transfer contaminants to sport fish which could increase health concerns regarding the consumption of fish. This concern exists due to their tendency to eat large quantities of zebra mussels, which as filter feeders consume toxins. Although laboratory studies in North America have shown that a single goby can consume up to 78 zebra mussels a day, it is unlikely that gobies alone will have a detectable impact on zebra mussel populations. Another unique characteristic of this species is it has a single pelvic fin.

Like most invasive species both of these species lack natural predators and have a high reproduction rate making it very easy for these species to move into aquatic habitats.

Posted in On The Water and tagged consumers energy foundation planet grant, on the water, OTW
← Mark Your Calendar for 2020 Chainsaw Safety Training2020 On The Ground Wildlife Volunteer Opportunities →