Wolf Management Advisory Council  members heard emotional public testimony on Wednesday from a hunter detailing losing his dog to a wolf attack in front of him. Jordan Farmer’s testimony brought silence to the room.

Sitting up front and listening to Farmer was uncomfortable but necessary, said Amy Trotter, MUCC executive director and WMAC member.

“Jordan’s testimony was gruesome, but hearing the realities of what living with wolves truly feels like and recognizing that those dealing with the issue need help is part of the council’s responsibility,” Trotter said

Farmer’s public comment can be watched by visiting the Straits Area Sportsmen’s Club Facebook page. His comments start at about 13:50 in Session #2 – Public Comments. While not discussed at the meeting, it is important to note that there were laws passed back in 2008 to allow individuals to protect their livestock and dogs from injury and death due to wolves that are now in effect given the federal wolf delisting.

Before Farmer’s testimony, Shawn Riley of Michigan State University presented on the anticipated public attitudes towards wolves survey. Riley noted that the data was in its initial form. Using statistical modeling, Riley will develop a final survey report with data that can be extrapolated across the general public.

Riley’s presentation noted a general acceptance of wolf management by the public, including overwhelming support in the Upper Peninsula and Northern Lower Peninsula for hunting and trapping seasons. When asked to provide their opinion on a wolf hunt if biologists believe the wolf population could sustain a hunt, just under 50 percent of respondents who were Southern Lower Peninsula residents said they would support a hunt. 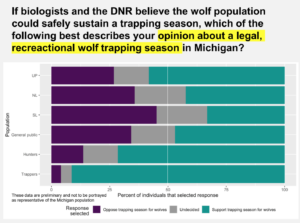 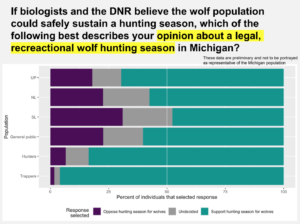 The presentation also demonstrated that respondents felt doing nothing was never an acceptable scenario related to dealing with wolf behavior. As the diagram below indicates, public acceptability of wolf management is dependent on specific wolf behavior. This data also shows the survey respondents found a reduction in the overall wolf population as an acceptable  response to localized conflicts. 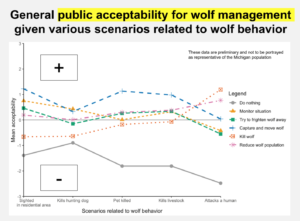 The mean demographic of survey respondents was about age 60, majority male and white.

The council did make a series of recommendations related to sections of the wolf plan discussed at previous meetings. Under section 6.2 Maintain an Active Research and Monitoring Program the council passed a recommendation presented by Trotter to prioritize research and literature review examining a host of wolf and prey issues to allow the DNR to make sound judgments based on the best available science.

From section 6.3 Enact and Enforce Regulations Necessary to Maintain a Viable Wolf Population of the 2015 Wolf Management Plan, the council passed a series of recommendations:

The council is expected to start discussing sections 6.10 Manage Wolf Depredation of Domestic Animals and 6.12 Develop Socially and Biologically Responsible Management Recommendations Regarding Public Harvest of Wolves at its February 23 meeting at Treetops Resort in Gaylord.

The council’s objective is to make recommendations to the DNR, Michigan Legislature and Natural Resources Commissions regarding the state’s wolf management plan.

Michigan’s minimum winter wolf population estimate is 695 wolves (winter 2019-2020), according to the DNR — greater than the original population minimum of 200 required for delisting established by the DNR in 1997.