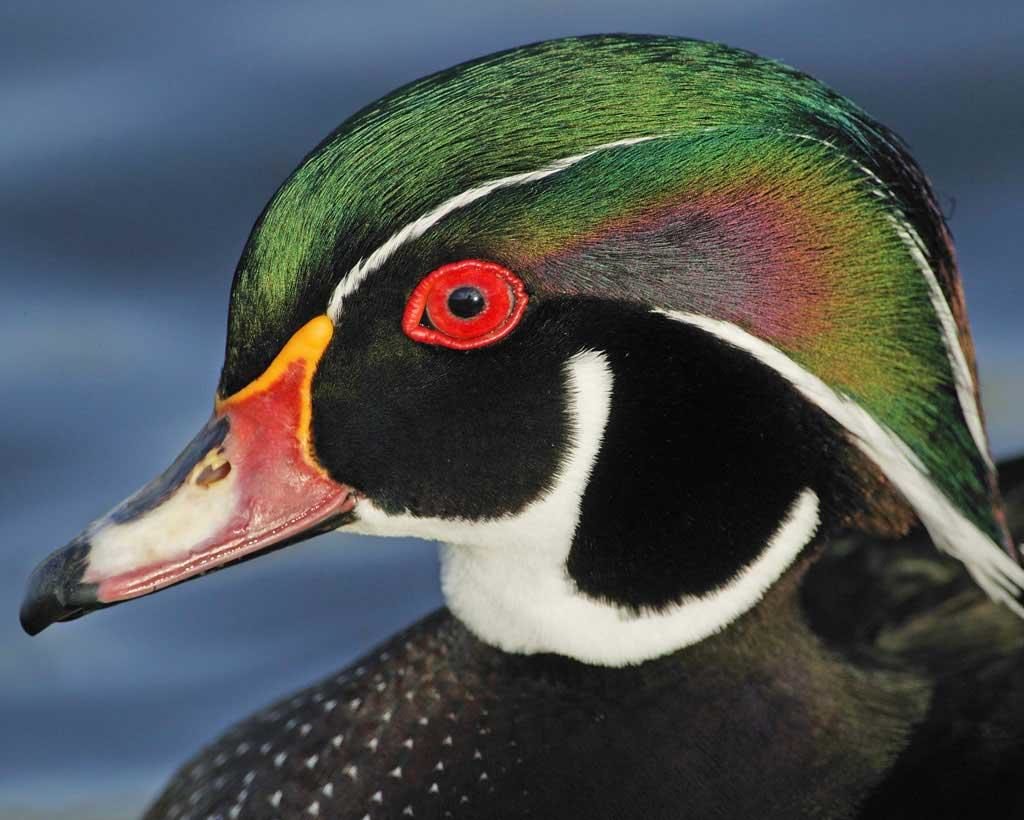 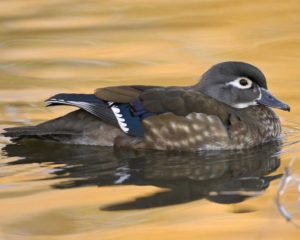 “The Wood Duck are one of the most stunningly pretty of all waterfowl. Males are iridescent chestnut and green, with ornate patterns on nearly every feather; the elegant females have a distinctive profile and delicate white pattern around the eye. These birds live in wooded swamps, where they nest in holes in trees or in nest boxes put up around lake margins. They are one of the few duck species equipped with strong claws that can grip bark and perch on branches.”(All About Birds)

Wood Ducks habitat around wetlands, marshes, and overgrown riverbanks, they are less likely to be seen in large open water areas. They pick their way around vegetation growing out of the water or stand on tree branches or logs along the shorelines.

Wood Ducks are one of the many waterfowl species in Michigan, but that wasn’t always the case. In the early 20th century the Wood Duck population was on the massive decline due to habitat loss like wetlands being harvested, drained, and plowed over for agriculture and to accommodate the exploding U.S. population and overhunting. Overhunting of waterfowl was largely unregulated at the time and hunters baited and shot at close range without consideration for population numbers or season. 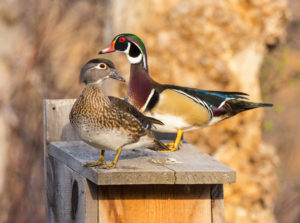 waterfowl hunters 16 years of age or older to purchase a stamp and carry it along with their general game hunting license… The Duck Stamp linked stamp-generated funds to securing and managing lands prioritized for migratory waterfowl populations….The Duck Stamp Act continues to this day to be a world-renowned conservation program. It permits anyone—hunter or not—to directly support the conservation management of critical migratory waterfowl habitats and birds.”(Cornell Lab)

In 1937 Wood Duck populations were recovering slowly even while being protected by a hunting ban, but a plan to provide nest boxes offered new hope. The pace of their recovery since the ban showed that populations weren’t just suffering from hunting; habitat loss had deprived them of the mature dead trees they required for nest cavities. As nest boxes began to appear by the hundreds, populations responded rapidly. Nesting was successful in about half of the nest boxes installed over the first two years of a pilot plan meaning hundreds more Wood Ducks were surviving each year. The box designs—attributed to biologists Gil Gigstead and Milford Smith at Chautauqua National Wildlife Refuge in central Illinois—remain central to Wood Duck management across North America. Hundreds of thousands of Wood Duck nest boxes have now been installed by private citizens and federal agencies.

MUCC is helping out the local Wood Duck population Saturday, March 7th, come on out to Burchfield County Park and help restore the Wood Duck box population! The event starts at 9 am at Burchfield County Park at the Winter Sports Complex. Lunch will be provided by MUCC at noon, and volunteers will receive a reusable water bottle and stickers to take home at the end of the event! You can REGISTER HERE!

MUCC’s On the Water’s funding from Consumers Energy’s Planet grant comes to an end this September. If you like what OTW is creating and want this program to continue please let us know! OTW unquestionably wants to advance as a program, connect and form partnerships that improve watersheds around the state of Michigan, but we can’t do this without your support.