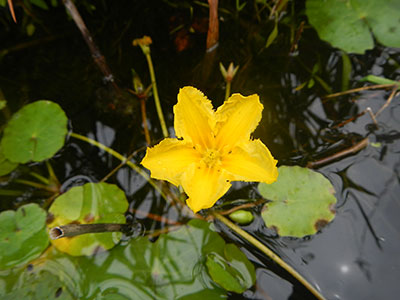 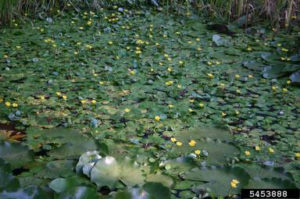 The next aquatic invasive species up this week is the Yellow Floating Heart plant! This invasive perennial aquatic plant is found in slow-moving rivers, ponds, and lakes. The flowers are bright yellow with five petals, located above the surface of the water and the leaves are circular or heart-shaped and are alternately arranged on the stem but oppositely on the flower, these leaves can grow into large intertwining mats. The seeds are flat and oval.

Wheater the invasive species was introduced in the early 1600s or recently they always pose a threat. The Yellow Floating Heart plant is one of the most recent ones to take root in Michigan there have been very few sightings and they have been eradicated! This invasive came over from Asia and Europe recently the first spotting in Michigan was in 2015 in the reflection pond at the Clara Ford Rose Garden in Dearborn. A second, smaller infestation was found in a small pond at the Red Oaks Nature Center in Madison Heights in 2016. There have been five other sightings in Kent, Ottawa, Allegan and Ingham counties, “The State of Michigan’s Early Detection and Response Initiative has successfully eradicated two known infestations of yellow floating heart, an aquatic invasive plant that is harmful to Michigan’s water resources.” 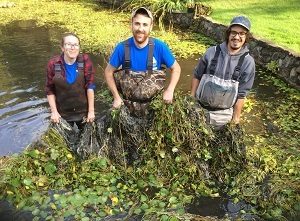 The state of Michigan has caught this aquatic invasive before it has spread very far. Michigan Department of Environment, Great Lakes, and Energy’s Water Resources Division is leading the invasive aquatic plant Early Detection and Response Initiative in collaboration with the Department of Natural Resources, Michigan Natural Features Inventory, and Michigan State University Extension to eradicate this species before it even becomes a stabilized population in the state of Michigan. The best method they have found so far is to manually pull the species it has also been placed on the Michigan Invasive watch list and is banned in the state of Michigan.