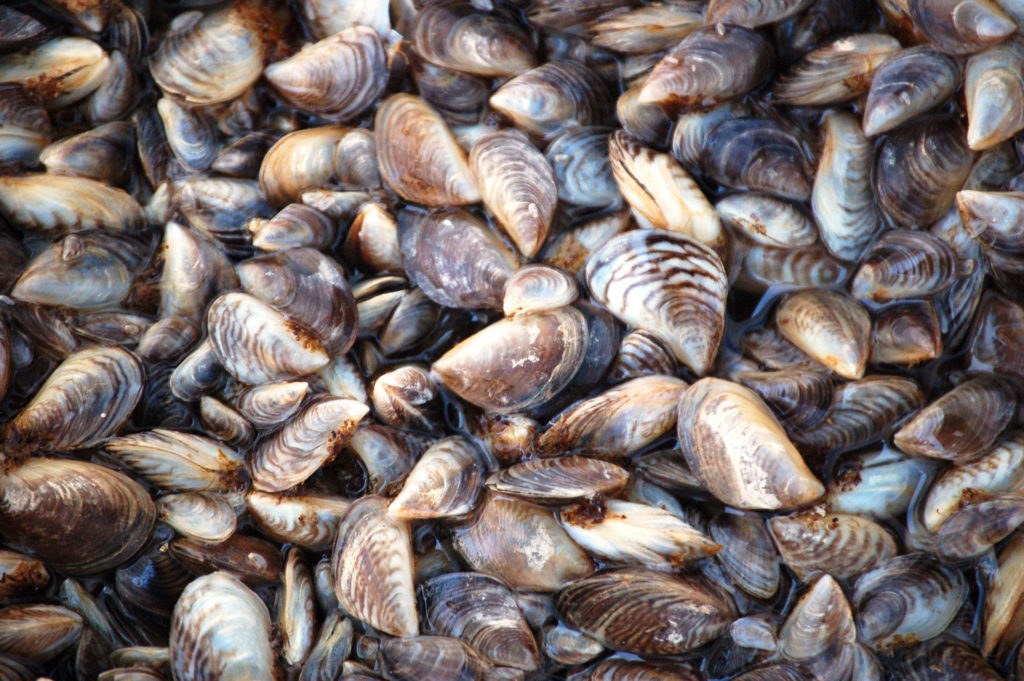 For the most part, Michigan citizens know and are aware that this invasive species Zebra Mussels are alive and well established in the Great Lakes Region. “This small freshwater mollusk originated in the Black, Caspian, and Azov seas region of the former Soviet Union. By the late 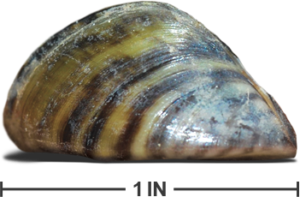 18th and early 19th centuries, the construction of extensive canal systems enabled the spread of zebra mussels to almost all major drainages of Europe.”(USFW) It then made its way over to the US and by the 1990s this species was established in all of the Great Lakes.

Zebra Mussels are about an inch long and are shaped in a triangle and can sit flat on the ventral side and can live around 4 to 5 years. The rapid dispersal of this species through the Great Lakes Region is because it can attach to boats and can travel long distances, it can also stay alive outside of a body of water for several days under moist and reasonably cool conditions. Females can also produce up to 40,000 in one reproductive season and almost a million during the spawning season.

Zebra Mussels can filter up to 1 liter of water per day, this can have negative effects on that body of water because the Zebra Mussels’ actions are changing the ecology of that body of water. An example of this is if the water is clearer, more aquatic plants can grow leading to more aquatic prey species to hind within these new growths making it harder for predators to achieve a meal ticket. Leading to predator 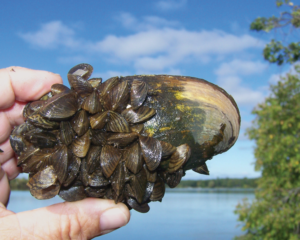 populations decline and prey populations increasing. “Zebra mussels are notorious for their biofouling capabilities by colonizing water supply pipes of hydroelectric and nuclear power plants, public water supply plants, and industrial facilities. They colonize pipes constricting flow, therefore reducing the intake in heat exchangers, condensers, fire fighting equipment, and air conditioning and cooling systems. Zebra mussel densities were as high as 700,000/m2 at one power plant in Michigan and the diameters of pipes have been reduced by two-thirds at water treatment facilities. Although there is little information on zebra mussels affecting irrigation, farms and golf courses could be likely candidates for infestations.” (USGS)

The first proactive step that can be taken against invasive species like Zebra Mussels is to educate yourself and those around you. Jessica Gurevitch and Dianna K. Padilla put it perfectly, “The better we understand both patterns and mechanisms causing declines, the better we can focus our efforts on the most effective ways to reduce or mitigate threats.”(Are invasive species a major cause of extinctions?)

Posted in Invasive Species, On The Water and tagged consumers energy foundation planet grant, on the water. OTW
← A Farewell to Your Huron Pines AmeriCorps Member and a Hello to Your New MUCC Club AdministratorOut for Trout: December NRC Takes Up Fisheries Regulations & Hunting on State Recreation Areas →