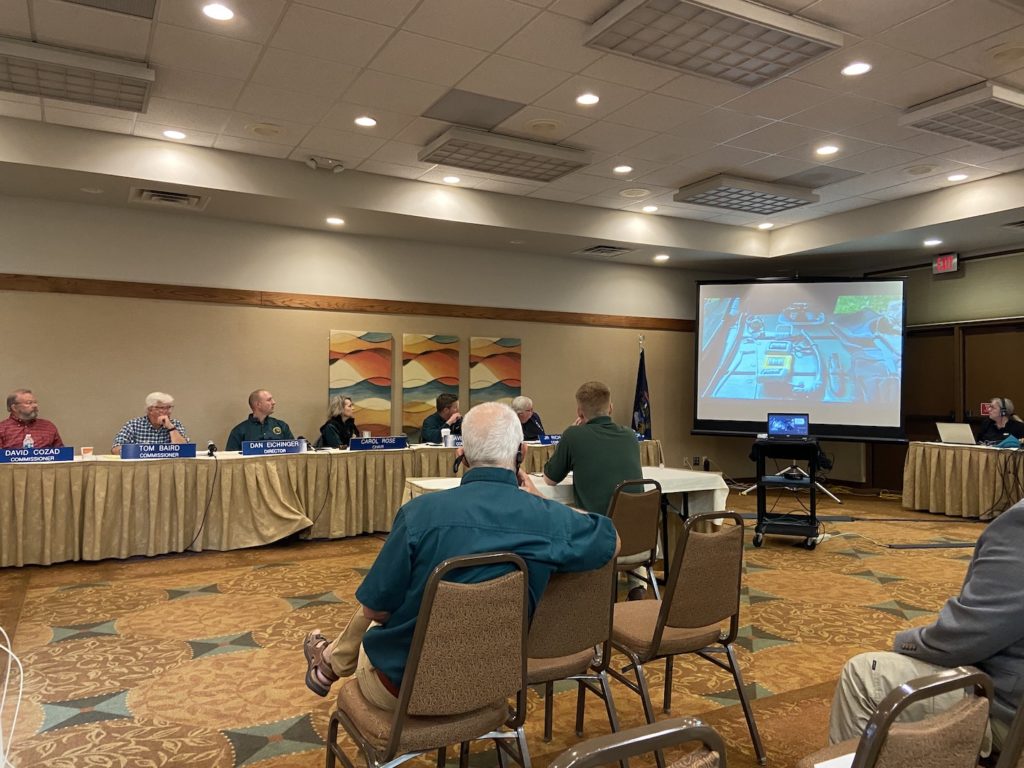 NRC Chair Carol Rose gaveled in the meeting at 9 a.m. and introduced the commission’s new assistant, Su Schrauger. MUCC looks forward to working with Schrauger moving forward and congratulates her on her new position.

DNR Director Daniel Eichinger opened the meeting talking about the August 4 Wolf Management Advisory Council (WMAC) meeting. The director noted robust public comment, the organizational nature of the council’s first meeting and what the public can expect to hear at future meetings.

Eichinger said there will be presentations detailing the minimum wolf population count survey in regards to: how population estimates are generated, what the survey techniques are, and what kind of internal and external validation process the study goes through. He also announced that the next meeting would be September 1 in Northern Lower Michigan.

“There’s going to be a lot of attention on that topic in particular,” Eichinger said, referencing the wolf survey. “We are going to make sure we meet that squarely and head on so that we are unpacking for folks in a public way how we do our surveys, what our surveys are and what they are not. I think it’s important for understanding the role of confidence intervals as well.”

Before presenting on proposed fisheries orders,  DNR Fisheries Chief Jim Dexter explained why a proposal related to the Jordan River was not supported by the department. The proposal would have changed stream type designations and implemented catch-and-release angling in certain reaches.

Friends of the Jordan River brought the proposal forward to the department and has been the proposal’s main advocate in recent years. Dexter noted that the proposal was opposed by the Coldwater Steering Committee, Law Enforcement Division, Inland Waters Guide Alliance and the DNR’s regulatory review committee.

The proposed orders, in whole, can be found here:

Please read our August 11 release for a summary of each proposed order.

Regarding order 219.22, the DNR is proposing that a new category called underwater spearing be added to the fisheries order at the request of the Michigan Spearfishing Association. This would expand harvest species for underwater spearfishing to include lake trout, northern pike and walleye in southern portions of Lake Michigan and Huron, and in Lake Superior waters west of Chocolay River.

A five-year evaluation would occur on the number of permittees, harvest numbers and angler effort to see what potential impacts, if any, occur. MUCC feels that there is no negative biological implication should this order pass, but did not weigh in on the details.

DNR Wildlife Veterinarian Dr. Kelly Straka and Senior Advisor for Wildlife and Public Lands Scott Whitcomb presented on the state of chronic wasting disease in Michigan and what the department’s surveillance strategies will be moving forward.

Director Eichinger said he intends to sign the State Land Review Recommendations. Land-use order number five, which would restrict access to water from state-managed beaches under certain conditions, was held over until September by the director.

Since the onset of COVID-19, the NRC has not held regular committee meetings. Under appointment from NRC Chair Rose, commissioners Baird and Cozad undertook the task of evaluating subcommittees and operations.

Commissioners Baird and Nyberg noted that the commission’s role and legal purview has changed over time. Nyberg said the committees, work groups and task forces add value to the commission’s engagement with the public.

MUCC Executive Director Amy Trotter has attended NRC meetings since 2007. She said committees have often played a valuable role in the past.

“Committees can serve as venues to dive deeper into subjects affecting fish and wildlife that may be beyond just the hunting and fishing regulations before them, including topics like habitat, invasive species, public access and user conflicts,” Trotter said. “They also allow experts outside of the department to provide information related to commission issues.”

To view the recommendations from commissioners Baird and Cozad, please click here.