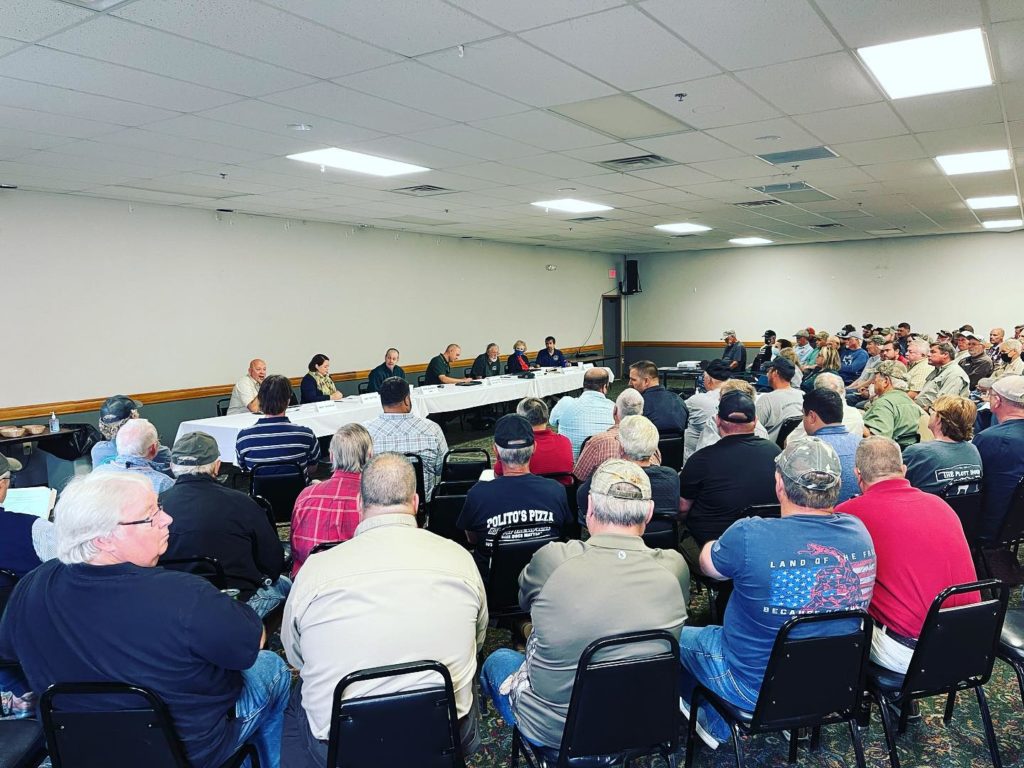 In January, the United States Fish and Wildlife Service (USFWS), through the Department of the Interior, delisted the gray wolf from the Endangered Species Act. Shortly thereafter, several lawsuits from animal rights activists were filed in federal courts, and Wisconsin held an immediate hunt.

The WMAC is complying with the Open Meetings Act (OMA), which provides for public discourse, transparency and recourse for operating outside of OMA parameters.

Department of Natural Resources (DNR) Director Daniel Eichinger started the meeting talking about the council’s roles and responsibilities, the current state of delisting and litigation, his take on its durability and Attorney General Dana Nessel’s recent legal brief submitted to a California federal court opposing the delisting.

“The attorney general’s office writ large has responsibility for serving as counsel for the State of Michigan. The AG’s office represents the DNR in legal matters,” Eichinger said. “That role and responsibility is distinct and different from the actions of the AG as an elected official. The AG’s position is not reflective or derivative of and was not by request of the department.”

The WMAC passed a motion to meet monthly through 2021, alternating locations between the northern Lower Peninsula and Upper Peninsula.

Council members also voted to have the ability to request certain presentations from practitioners and experts at future meetings. It was requested that progress updates on the revisions to the Wolf Management Plan be provided at the monthly meetings.

For votes taken by the WMAC, a simple majority vote constitutes approval on a motion. Ties will result in a failed motion. Of the six individuals on the council, each member has the ability to exercise their vote or abstain from voting.

This format is a departure from previous wolf-related stakeholder processes that strove for consensus-only recommendations and thus were not always as bold as they could have been.

“Using a simple-majority format allows council members to firmly and openly state their position and not have to concede to something they merely can live with,” Trotter said.

The WMAC voted that the minority votes on a given motion will have their dissenting opinion preserved via written comments. The majority vote will be documented as the council’s recommendation. Trotter suggested that unanimous recommendations are highlighted in reports.

“While this first meeting was boring to listen to and sometimes confusing for the public, the development of rules of engagement and processes for the newly-appointed council are critical to how it functions going forward,” Trotter said.

A member of the public asked that the WMAC not become a “self-licking ice cream cone.”

“We are not here for ourselves or to rubber-stamp proposals,” Trotter said. “I plan to roll up my sleeves and try to create real and durable changes in Michigan’s wolf management.”

The draft public appearance guidelines were accepted by council members.

Public comments can be made in person or via email by emailing DNR employee Victoria Lischalk, executive assistant to the Wolf Management Advisory Council, at dnr-wmac@michigan.gov.

In total, Wednesday’s meeting garnered about 300 public comments. About 40 of those were in person. The overwhelming majority of in-person comments were from Yoopers in favor of state management of wolves.

Kevin Swanson, former DNR large-carnivore specialist, addressed the WMAC for about 10 minutes on behalf of himself and three others in the audience. Swanson noted his tenure with the department before unveiling potentially damaging information about past wolf survey data.

Swanson, an Ishpeming native, spent about four years as the carnivore specialist. His public testimony detailed the process of internal “auditors” re-counting wolf pack numbers, which he said “is a good thing.” He equated it to a system of checks and balances.

Then things got messy.

Swanson referenced the Strawberry Lake Wolf Pack, which had historically had two wolves in it. He said he “confirmed more than two wolves in that pack in 2016. From recollection, I think the number was four, but I didn’t save the datasheets I should have.”

“A few months later, as I sat in my office, I found out that Brian Roell, who was my auditor, had adjusted my number downward again without the courtesy of telling me he had done it,” Swanson said. “When I found this out, I immediately confronted him as he passed by my office. He then told me to blank off and then walked back to his office.”

After some time had passed, Roell returned to Swanson’s office, apologized and said he would move the pack number back to what Swanson had stated, according to Swanson.

Roell, a DNR wildlife biologist based in Marquette, was the person responsible for compiling and reporting wolf counts at the time — he was the interdepartmental auditor for Swanson’s counts.

“There’s a bigger problem here,” Swanson said. “I stood up and looked at Brian directly and said that I demanded to see all the datasheets for all UP staff. I did this because if he had changed my numbers, the large-carnivore specialist with the State of Michigan, who else is he doing this to? I had been told this had happened to other staff.”

Swanson took the issue to Lansing but did not receive support from supervisors. This ultimately led to him leaving the DNR, he said.

On a Facebook post Thursday morning, Roell said, “… I am not going to take the low road he chose to take and run him down, but I can tell you that the survey has always been done with the utmost scientific rigor so that the minimum population estimate could be defended in the court of law and standup without question from the multiple FOIA request the data has received over the years.”

According to DNR staff present at the meeting, the number of wolves Swanson is claiming as “undercounted” would likely be negligible in the grand scheme of the minimum population count, and the total number would still fall within the study’s 95 percent confidence interval.

Trotter, with MUCC, requested that the scientific methodology used to determine minimum wolf population counts be presented at a future meeting. She has also asked that the process for auditing the methodology and data be made available.

Are there questions you would like answered at upcoming WMAC meetings? If so, please email MUCC Policy Coordinator Ian FitzGerald at ifitzgerald@mucc.org or Public Information Officer Nick Green at ngreen@mucc.org.