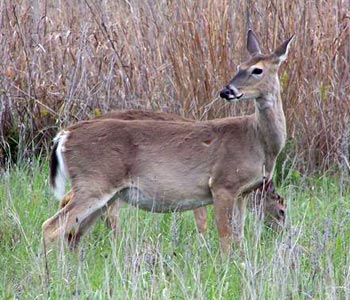 At the June Natural Resources Commission (NRC) meeting, chronic wasting disease regulations are up for information, with antlerless deer license quotas in the Upper Peninsula up for action.

The meeting will take place at the Detroit Zoological Society at Ford Education Center Theater, 8450 West Ten Mile Road, Royal Oak, MI 48067. If you are unable to attend but would like to watch, check out the MUCC Facebook page! A full agenda for the day can be found here.

The day will begin at 8 a.m. with the Michigan State Parks Advisory Committee. The agenda includes an update on the Department of Natural Resources and Oakland County Parks and Recreation ORV committee, followed by a stewardship update. The stewardship update will focus on the stewardship program as well as Hemlock Woolly Adelgid.

At 10:00 am, the NRC Policy Committee on Wildlife and Fisheries will come to order. Updates from both the Michigan Department of Natural Resources (MDNR) Wildlife Division and MDNR Fisheries Division will be given by the respective chiefs. Jim Dexter, the MDNR Fisheries Division chief will provide an update on 2020 fish regulations proposals. The chief of the MDNR Wildlife Division Russ Mason will give an update on the following: designated campsites on Beaver Island State Wildlife Research Area Charlevoix County; technical change deer harvest survey report; chronic wasting disease (CWD) antler point restrictions (APR) survey results; and CWD regulations.

The NRC Committee of the Whole will meet at 1 pm. The Committee of the Whole will begin with an opening flag ceremony from Cub Scouts Pack 1070 from Mt. Clemens Montessori Academy. Directly following the ceremony, a director’s report will be given by MDNR Director Dan Eichinger. Eichinger will present the law enforcement/wildlife division lifesaving award and the North Country Trail’s Vanguard Award. The director’s award presentation will be followed by legislative and committee reports.

Commissioners will be taking action on antlerless deer license quotas in the Upper Peninsula. This topic was discussed at the NRC meeting in May. The order can be found here. The department reports having seen a recovery in the Upper Peninsula deer population since the harsh winters of 2013 and 2014. With the recent CWD-positive deer found in Dickinson County, the department is recommending increased antlerless harvest to manage the local deer herd. The quota recommended is to increase the total number of antlerless deer licenses from 12,225 in 2018 to 14,700 in 2019 in Michigan’s Upper Peninsula.