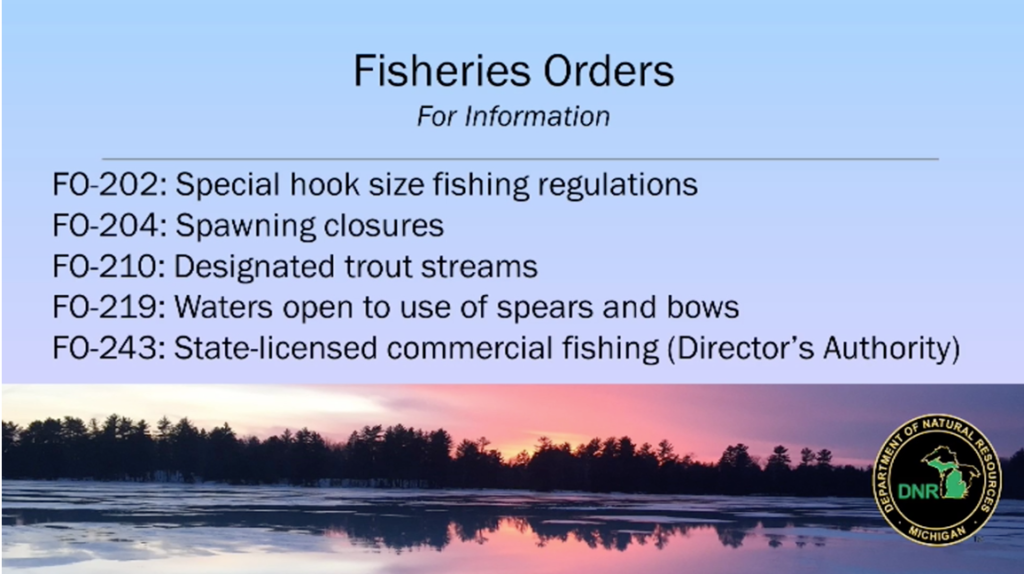 The NRC met virtually on Thursday to consider a number of agenda items. The Michigan DNR hosted the meeting, and a recording can be viewed using this link.

NRC members had a fresh slate of business at this meeting pertaining to fisheries issues, but also took up a discussion about the deer regulations passed in July. Members of the NRC heard from DNR staff on each of the orders presented.

MUCC Executive Director Amy Trotter noted that it will be important for local stakeholders to review and weigh in on these specific orders and for the NRC to be clear about their intent in rule-making.

“The regulation changes that are on the table have the potential to impact a number of anglers around the state and are aimed at meeting long-term management goals,” Trotter said. “In the coming weeks and months, MUCC staff will work closely with the DNR and NRC, on behalf of our member-passed resolutions, to make sure that anglers are heard clearly in this process.”

The NRC took up five fisheries orders at this meeting dealing with topics including hook size and gear restrictions, as well as fishing seasons and stream designations.

The first order on the NRC’s agenda dealt with boundaries on the legal size of fishing hooks on the Bear River in Emmet County. Due to some angler feedback, the special hook size restriction zone was unclear and confusing. If passed in September, the order would add a common landmark to more clearly denote the area in question – changing a location denoted by coordinates to one marked by the footbridge north of Lake Street upstream and the Lake Street Dam (T34N, R5W, S6). Similar orders are already in place in Allegan, Benzie, Berrien, Charlevoix and Van Buren counties.

The second fisheries order would alter spearfishing regulations on North Manistique (Round) Lake in Luce County. If passed in September, this order would open the lake to spearfishing through the ice for northern pike and muskellunge from December 1 through March 15.

A third fisheries order intends to further deal with spawning closures on the Betsie River Homestead Dam area in Benzie County, as well as the Torch River in Antrim and Kalkaska counties and the Douglas Lake pike marsh in Cheboygan County. NRC members considered measures to close portions of the Betsie and Torch rivers to fishing during spawning runs to reduce potential harms to migratory fish in those bodies of water. If passed in September, this order would remove the restrictions on the Douglas Lake pike marsh, to “get rid of an unnecessary regulation,” as noted in the memo.

The fourth fisheries order would alter the designations of certain trout streams, which would change the regulation classifications of these bodies of water. DNR Fisheries Division recommended adding Carter Creek in Roscommon County and removing Wright Creek in Oscoda County from the order.

Lastly, members of the NRC considered an administrative rule regarding state-licensed commercial fishers. This order has historically been used to address issues impacting management of the state-licensed commercial fishery for the better protection, preservation, maintenance and harvesting of the fish. According to the DNR memo, these rules have been renewed annually for the past four years and require a vote again in 2020. The DNR recommended this order for renewal without change.

Commissioner David Nyberg initiated a discussion regarding regulations set at the July NRC meeting pertaining to the “doe with a bow” rule in the Upper Peninsula. After passage in July, DNR Law Enforcement staff found issues with enforcement of the portion of the order which relied on the amount of snowfall during a certain period of time. Due to procedural and logistical constraints, Nyberg proposed an NRC resolution to more clearly express the intent of the rule. This resolution could be considered in setting 2020 hunting rules, but it does not hold the regulatory weight of a formal Wildlife Conservation Order and the 2020 hunting digest is already in print. Commissioner Nyberg’s resolution passed unanimously.

It is likely that these regulations will not take full effect until 2021 and will be more holistically considered during the next round of deer regulation setting.

Commissioners also received a brief update on hunting and fishing license sales. Since the onset of COVID-19, the sale of hunting and fishing licenses has increased dramatically year-to-date, and this trend continued this month. While it is likely more individuals are taking advantage of the outdoors this year, it is also important to note that some of these trends may be the result of the DNR’s new online license platform.

MUCC staff will continue to report on these regulations as more information becomes available.

The next meeting of the NRC will take place on Thursday, Sep.10 and will likely take place virtually.