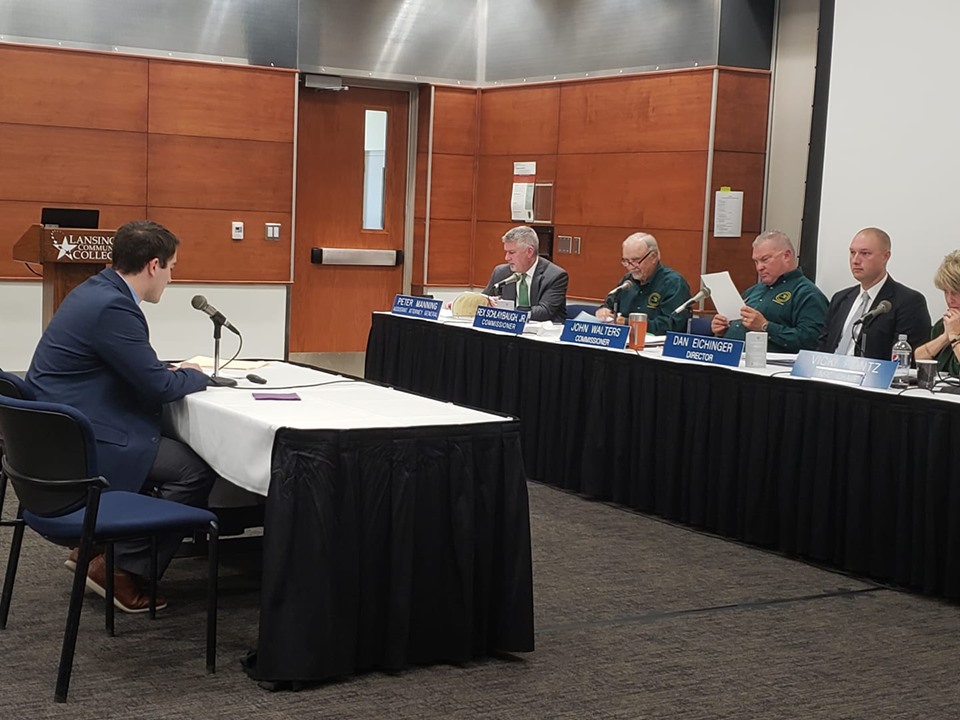 The Michigan Natural Resources Commission (NRC) met Thursday in Lansing to discuss a variety of fisheries-related orders and to receive information on spring turkey regulations.

Meetings began at 8:30 a.m. with the Policy Committee on Wildlife and Fisheries. Michigan Department of Natural Resources (MDNR) Fisheries Division Chief Jim Dexter updated the committee on the falls salmon run and the egg collection efforts of the division. Both are reported to be going well. Dexter also briefed the committee on some concerns regarding catch-and-release fishing in Grand Traverse Bay — a practice that MDNR research suggests causes upwards of 40 percent mortality in released fish. The committee ultimately decided that catch-and-release fishing could continue, but anglers should be discouraged from doing this after they have caught their limit.

Fisheries Division Unit Manager Seth Herbst then explained some of the proposed changes to Fisheries Order 200. If passed, this order would make a number of adjustments to statewide trout, salmon, whitefish, cisco, grayling and smelt regulations.

MDNR Resource Deputy Director Shannon Hannah presented the fall 2019 deer season forecast and briefed the committee on the presence of Eastern Equine Encephalitis (EEE) in Michigan deer. Hannah said deer numbers in the Upper Peninsula this year will be similar to last year, and deer numbers in the Lower Peninsula have increased or grown year-to-year. MDNR continues to offer guidance to hunters about being outdoors while EEE is present in the state, as well as best practices for the safe handling and consumption of meat in areas of EEE occurrence.

The NRC Committee of the Whole met at 9:30 a.m. to discuss a number of proposed actions and items for information.

The NRC then proceeded with scheduled business. For a list of items that were up for action and for information, see our NRC Preview.

MUCC Policy Assistant Ian FitzGerald testified on proposed changes to spring turkey regulations per a 2010 member-passed resolution. MUCC stands in favor of allowing turkey hunting from an elevated platform and starting spring turkey seasons on Saturdays, rather than Mondays.

The Commission moved forward on three distinct fisheries orders during the committee of the whole. The commission approved changes to:

This order adds consistency to Muskellunge regulations on the boundary waters between Michigan and Wisconsin by increasing the size limit from 42 inches to 50 inches. It also extends the possession season from November 30 to December 31. The amended order aligns possession dates for bass by extending the season from Nov. 30 to Dec. 31.

This order delays the possession season to May 15 to protect spawning walleye on certain stretches of the Cheboygan and Black rivers. The order also changes northern pike regulations on select waters in Montmorency, St. Joseph, Delta and Branch counties.

This order simplifies walleye regulations in the Detroit River, Lake St. Clair and the St. Clair River by aligning the daily possession limits for these connected waters. These changes should streamline regulations for better angler understanding and compliance.

This order updates reporting requirements for commercial fishers to bring them up to speed with the department’s new electronic reporting process.

Director Eichinger approved 13 land transactions, the details of which can be found in the NRC agenda.