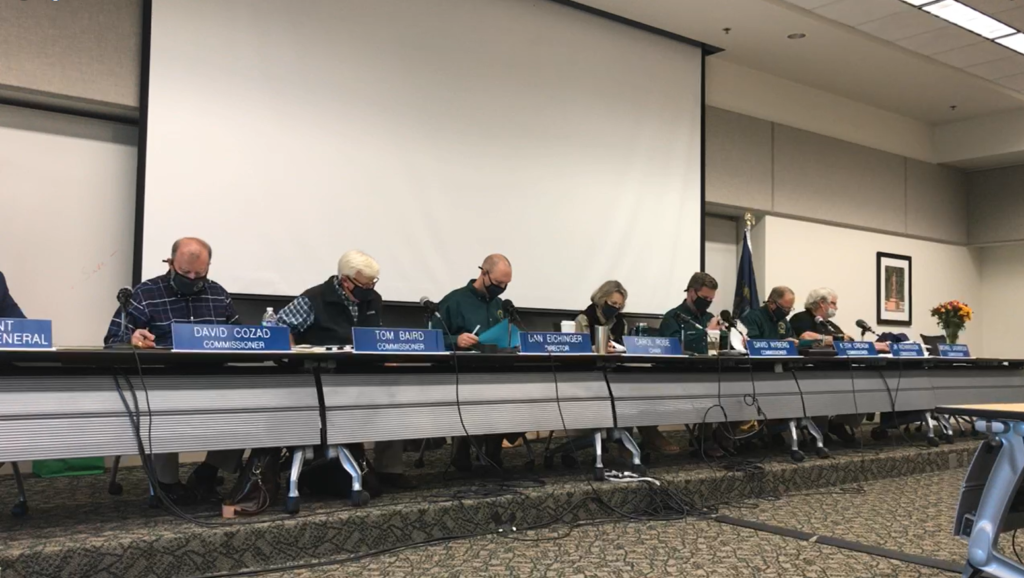 The fisheries orders that were passed by the commission (with no amendments or changes made) include the following:

DNR Director Daniel Eichigner’s report to the NRC included an introduction of the DNR Wildlife Chief Jared Duquette, a hire from last fall, and having fisheries division staff present on the myriad of fisheries orders that are before the commission — both new business and old.

Comments from members of the public varied from CWD testing, underwater spearfishing and the budget of the DNR. Director Eichinger mentioned that once the FY 22-23 budget is approved there will be a presentation on it to the commission from department staff. The Director indicated his intent to sign all 5 land transactions that were up for action.

Little discussion was had on the four fisheries orders that were up for new business before the NRC, aside from a commissioner requesting clarification of the Manistique River in FO 210.22 – Designated Trout Streams for Michigan. The clarification would remove the trout stream designation from Devils Creek and its tributaries in Menominee County because the habitat is no longer suitable for trout.

The other fisheries orders that were new business and are available for action at the October meeting included:

FO 216.21 – Minnow, Wiggler, and Crayfish Regulations for Commercial Purposes and Waters that are Closed to the Personal Take of Minnows

Director Eichinger indicated that he intends to sign the land-use order that would restrict access to water from DNR Parks and Recreation division managed beaches. MUCC covered the matter extensively when it was introduced.

Commissioner Baird proposed an amendment to add a three-year sunset to the underwater spearfishing regulations.

Commissioner Richardson proposed that department staff draft an amendment for public posting and consideration at the October 14, 2021 meeting, to remove Lake Superior from waters open to underwater spearfishing.

Commissioner Richardson proposed an amendment regarding the daily possession limit for round whitefish, otherwise known as Menominee.

This link has more information on the recommendation from Commissioners Baird and Cozad to return to three standing committees, with the option for ad-hoc committees as certain issues present themselves. The three committees that are proposed include the governance committee, fisheries committee and wildlife committee.

“The purpose of the committees is to identify issues, liaise with DNR staff, arrange for input from independent experts and stakeholders, review scientific literature and data, review regulatory issues within the jurisdiction of the NRC, and ensure that principles of sound scientific management are used in the NRC’s decisionmaking process and advisory role,” according to the above-linked document from the DNR.

NRC Commissioner Keith Creagh mentioned his intent to have the issue of deer tracking with hounds be discussed further by the commission, whether it occurs via an ad-hoc committee or before the commission of the whole.

Currently, deer trackers must have their dogs on a lead while tracking and are unable to dispatch a deer when the hunter is behind or unavailable. MUCC has member-passed policy from 2019 that supports the tracking of deer with dogs off-lead and the dispatch of a deer by the tracker if: the licensed hunter is unable to walk through a dense wooded area or unable to walk due to a temporary or permanent disability or medical condition or the life or safety of the tracking dog is in jeopardy.

The commission met for a closed session at the end of the meeting. The next meeting of the NRC is Oct. 14 at the MSU vet diagnostic center.