The organization’s most prestigious recognition, the Conservation Hall of Fame, grew on Saturday evening with the induction of Becky Humprhies into the hall’s ranks. 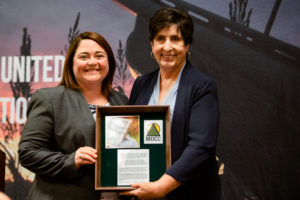 “Humphries is one of only three women, including Genevieve Gillette, a champion of state parks and Joan Wolfe, recognized for her work to ban DDT, allow citizens to legally intervene on behalf of the environment, and also serve as the first female chair of the Michigan Natural Resources Commission, to be inducted into the Conservation Hall of Fame,” Trotter said during the presentation.

Humphries thanked Trotter and the MUCC membership for its hard work over the years, saying the organization wasn’t always the voice she may have wanted to hear but was thankful that she did, she said.

Noting Pride’s ability to think on her feet and triage situations like broken bird wings because MUCC is confused for the DNR, MUCC Past President Paul Rose presented the award in front of Pride’s family members.

Trotter said Pride’s years of dedication to the organization are unmatched and treasured.

“Her knowledge and history has helped me to become a better executive director these past few years,” Trotter said. “Without Sue, this organization wouldn’t be what it is.”

The 50 Years of Conservation Award was presented to Jim Hammill by then-Immediate Past President and fellow Yooper George Lindquist. 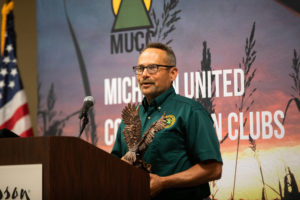 Hammill’s career with the DNR spanned 30 years and he was responsible for collaring the state’s first wolf in its attempt to study packs in the Upper Peninsula. Hammill’s work also included bear, white-tailed deer and habitat restoration.

“You all are to be thanked and appreciated for your efforts,” Hammill said. “When someone in public service receives recognition from those they work for and alongside, that means something. Thank you all so very, very much.”

Livingston County Wildlife & Conservation Club received the Affiliate of the Year award for its continued commitment to the Michigan Out-of-Doors Youth Camp and all of MUCC’s education programs.

DNR Biologist Bruce Barlow and Technician Coree Brooks were recognized as the organization’s On the Ground Conservation Partner of the Year for helping MUCC host six projects engaging 79 volunteers and improving 35 acres of wildlife habitat. 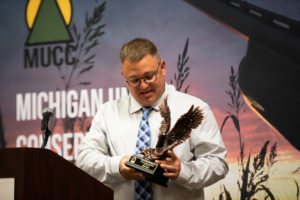 Grand Traverse Academy teacher Justin Lazar received MUCC’s Educator of the Year award. Lazar has committed dozens of classroom hours of his students learning to hands-on outdoor projects like MUCC’s On the Ground program. Through his leadership, Lazar, his students and those he gets to volunteer, have improved 92 acres of habitat. 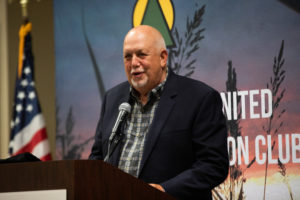 Steve Sharp received the Special Conservation Award for his years of service to the National Wild Turkey Federation, the recruitment, retention and reactivation of hunters in Michigan and his commitment to conservation.