Starting as a mail clerk before transitioning to merchandise sales, which included topographical maps, county map books and lake maps, Pride took on the thankless jobs that often go unsung. 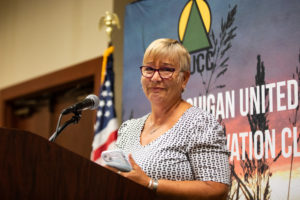 As technology changed how the organization operated, Pride’s duties began to include the MUCC membership. Evolving eventually into what Pride does today, she is often the first voice people hear on the phone when they call MUCC –– even when mistaken for the DNR after hours.

MUCC Past President Paul Rose presented the award to Pride and noted Sue’s compassion, grace and ability to listen to people and offer assistance where she could.

“Since many people confused MUCC with the DNR or just found it easier to call Sue, she frequently was the first to be contacted about a bird with a broken wing, a fawn in a yard, or a raccoon which just doesn’t ‘look right,’” Rose said. “She would patiently provide the appropriate contact information and do whatever she could to help – all of the while never saying ‘You’ve called the wrong number and by the way, I’m trying to do three other jobs here.’”

“Whether it is trying to track down a former employee Sue might have remembered something about or learning how the organization weathered litigation decades ago, Sue’s historical insight has helped me grow as an executive director,” Trotter said. “MUCC owes a lot to Sue for the time she has served the organization and its members.” 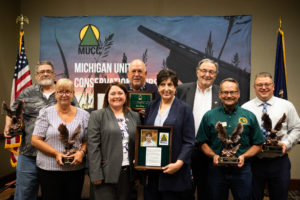 Her ability to do what was needed and change with the organization is what cemented her with MUCC, past president Rose said.

“During a time when all too many people would say ‘that’s not my job,’ Sue was always willing to do what was asked of her and this was especially true as changes to the organization became necessary over time,” Rose said.

MUCC isn’t sure when Sue expects to fully retire, but there will be many celebrations, long good-byes and tears when that happens, Trotter said.

“Having known and worked alongside Sue for most of my professional career, there are many things she has taught me about myself and about how to run this organization that I will not forget,” Trotter said.