New report: Michigan is No. 1 among Great Lakes states for jobs created from hunting, fishing purchases

The data also show 171,000 jobs are created and supported annually across Michigan by hunting and fishing, putting those related activities in the top 10 percent of the state’s job-creation industries. The greatest impact occurs in Southeast Michigan.

The economic overall effect is more than twice as much as previous estimates from the U.S. Fish and Wildlife Service, according to the report.

Michigan United Conservation Clubs commissioned the groundbreaking study in partnership with the Michigan State University Eli Broad College of Business and with funding support from the C.S. Mott Foundation. The project’s goal was to more accurately quantify the impact sportsmen and sportswomen have on Michigan’s economic well-being.

“The research results reflect that the economic benefits for local communities in every region of the state by those who hunt and fish are vital to continuing Michigan’s prosperity now and in the future,” said Amy Trotter, MUCC executive director.

Findings from the MUCC-MSU study were released during a news conference at MSU’s Demmer Center in Lansing that in addition to Trotter was attended by Michigan Department of Natural Resources Director Daniel Eichinger; state Sen.

Curtis Hertel Jr., D-East Lansing; Bill Demmer, director of MSU’s internationally acclaimed sports shooting training facility that was the site of the news conference; Jeff Poet, president and co-owner of Jay’s Sporting Goods and a member of the Michigan Wildlife Council; and leaders in Michigan’s business, conservation and tourism sectors.

The MUCC report is believed to be the most comprehensive effort to date measuring the annual statewide economic impact by Michigan’s 700,000 hunters and 1.1 million anglers: $8.9 billion from hunting and $2.3 billion from fishing stemming from purchasing gear and clothing, booking hotel rooms, buying meals and more.

“This is information the conservation community has long needed to improve our understanding of the financial importance of outdoor recreation,” Eichinger said. “MUCC, Michigan State University and the C.S. Mott Foundation deserve credit for their valuable scholarship that quantifies more clearly than ever how hunting and fishing are essential ingredients in Michigan’s diverse economic stew.”

The report shows that for every $1 million spent on hunting- and fishing-related purchases in Michigan, 19.61 jobs are created for state residents. Michigan tops the Great Lakes states by this measurement, followed by:

Previous estimates in Michigan and other states are based on a narrow formula that was applied most recently in 2011. Those estimates were derived from survey results of just 187 Michigan households and showed hunting and fishing contributed $4.7 billion annually to Michigan’s economy and supported 72,000 jobs.

The MUCC report is based on 2016 spending data and uses a new, state-of-the-art economic modeling formula to clarify in more precise detail the contributions of hunting and fishing to Michigan’s economy. The findings are based on a more robust analysis of data from the DNR and the U.S. Department of Commerce.

Inspired by the report, members of Michigan’s conservation, small business, tourism and legislative sectors called for state government leaders to launch a bipartisan push in 2019 that prioritizes more funding to:

“Because of the MUCC analysis, people who never hunt or fish should have a new appreciation for the economic power Michigan’s sportsmen and sportswomen deliver and that helps make our state a great place to live, work and recreate,” Howell said.

All told, hunting and fishing licenses generate about $62 million a year for wildlife and natural resources conservation projects in Michigan, with more than $40 million coming from hunting license sales. By law, that money is entirely dedicated to wildlife management and conservation activities.

Michigan is one of the top states in the nation for hunting license purchases.

In Michigan, every region feels the effect of hunting and fishing expenditures, according to the report:

“It’s clear that small businesses throughout the Great Lakes State rely on hunters and fishermen to keep their cash registers ringing all year long,” said Jeff Poet, president and co-owner of Jay’s Sporting Goods and a member of the Michigan Wildlife Council.

Additionally, license fees and surcharges on hunting and fishing pay for most of the wildlife conservation and habitat restoration work done by the DNR. But as the number of people hunting and fishing continues to decline with an aging population, state leaders are concerned how the resulting revenue loss will affect Michigan’s economy – and natural resource conservation efforts.

A recent demographic analysis conducted by Michigan Technological University shows the number of firearm deer- hunting licenses sold in Michigan has dropped nearly 21 percent over two decades – from a 1998 high of 785,000 deer hunters to 621,000 in 2017. By 2035, projections are that the late-’90s rate will be cut by more than half.

“Hunters and anglers foot virtually the entire bill for conservation in Michigan and across the nation. A continued decline in that base has huge implications for how we manage conservation of our forests and fields, wildlife, our lakes, rivers and streams today and in the future,” Eade said.

While the DNR, sporting groups and the state’s Pure Michigan campaign are expanding their outreach to attract younger hunters, minorities and women, Howell and Love said they are committed to ensuring Michigan will explore more innovative strategies to adjust to the state’s aging hunters and fishermen population.

In Nebraska, for example, a grassroots education campaign is successfully utilizing a variety of hands-on activities, programs and Spanish-language messaging to engage families in high-density Latino communities and encourage them to become fishing enthusiasts.

“We must work together to better promote the joys and opportunities of hunting and fishing in the Great Lakes State to younger and more diverse audiences if we want to grow participation and ensure these sports remain a key cog in Michigan’s economy,” Love said.

You can read the full report here. 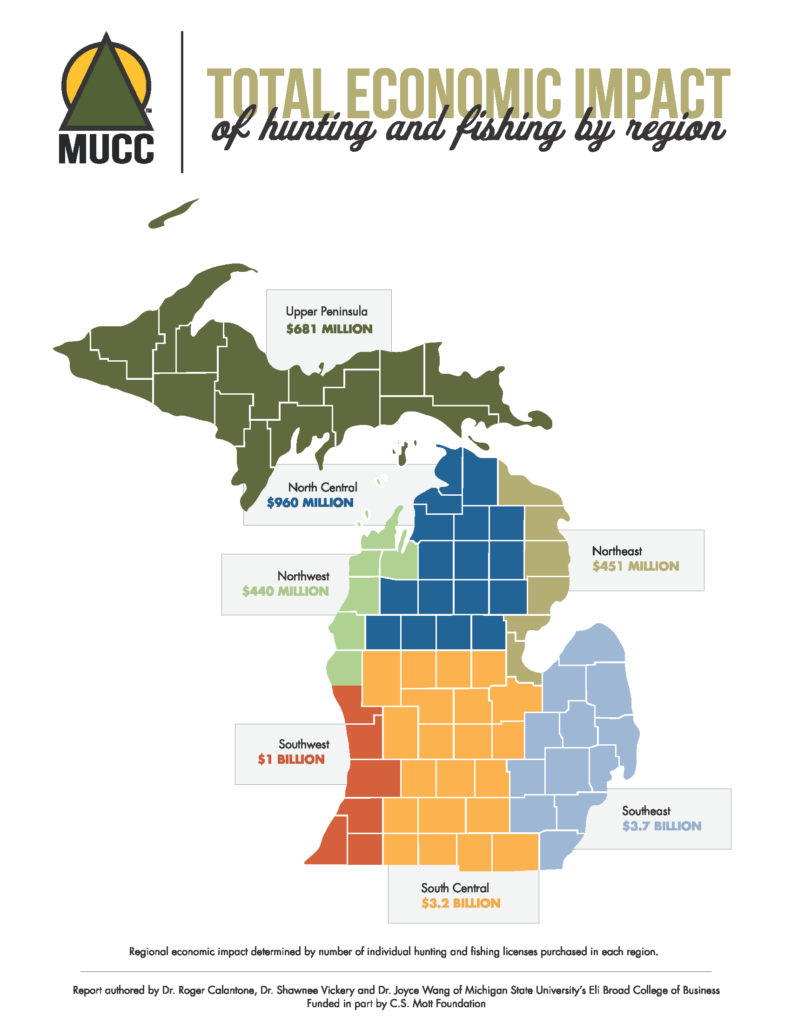