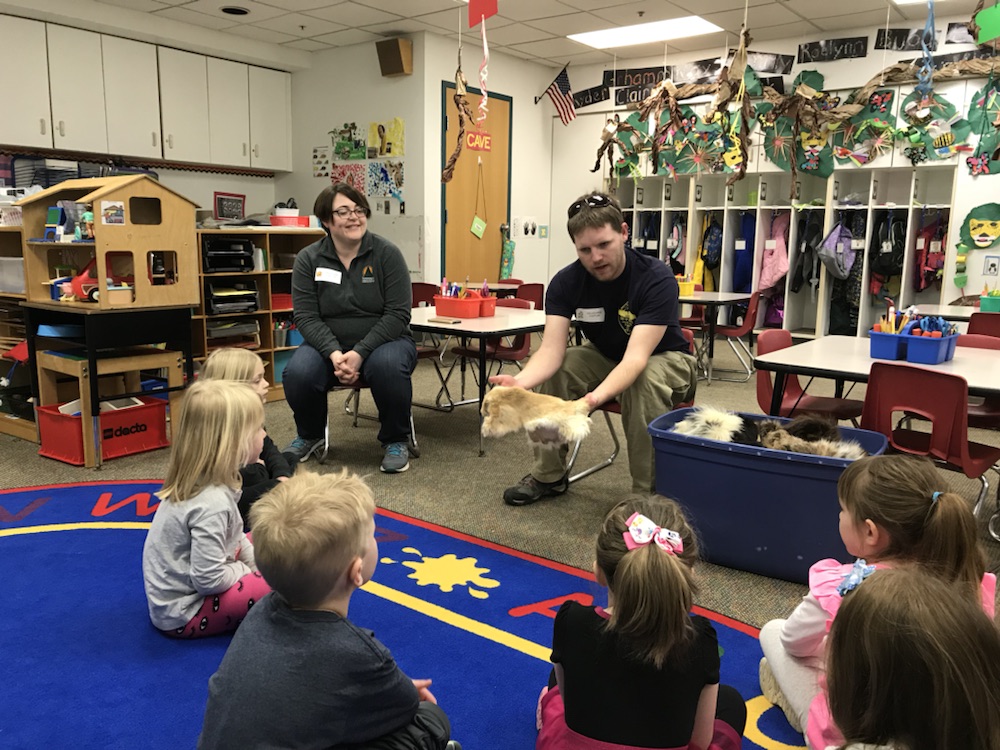 Last week on Friday the 13th, I had the opportunity to do something I don’t normally do.  I took a chance that 13 would be my lucky number and pushed my outreach comfort zone.  I did something I try to avoid at almost any cost. I went and spent some time with some developmental kindergarten classes.  These classrooms were filled with kids who were all age five. Typically, I try to work with kids in grade 4 and above.  Every once in a while I will drop down to a 2nd or 3rd-grade class, but me in a kindergarten class is unheard of. 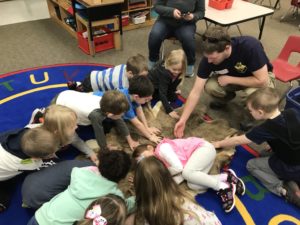 However, when my boss Deputy Director Amy Trotter asked me to do a presentation for her daughter May’s class I figured it would be a good chance to push my tolerance levels a little.  Plus anytime I hear kids are learning about animals in school I take it as a good class to visit.

May’s class has spent the last few weeks learning about animals around the globe.  When Amy and I got to the classroom, we noticed it had been turned into a jungle.  There were trees on the walls and paper monkeys the students had made hanging from the ceiling.  The animal unit had taken the kids all across the globe and each student had not only picked an animal to learn about, they also had a presentation on that animal and had built dioramas to teach their classmates about. 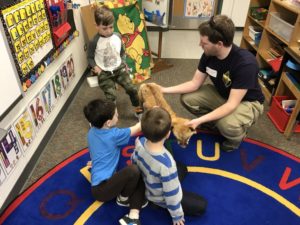 For my part, I was bringing the animal lesson home.  I brought several pelts all from common Michigan animals.  It was nice to connect the kids to animals that they could see nearby after they had spent time learning about elephants and pandas. As typically happens, the kids were spot on with their animal facts, and many knew the habitats you could find foxes and raccoons, as well as what the animals favorite foods might be. I was impressed by the knowledge these five-year-olds brought to the table.  They were dropping words like herbivore, carnivore, and even diurnal. Most adults I run into at outreach events don’t know what diurnal means. If you are wondering it is the opposite of nocturnal, so it means the animals are primarily active during the day.  The kids also knew beavers don’t eat fish, they are herbivores, which eat roots, plants like willow and cambium (the inside of bark). This is also a fact many adults don’t get correct. 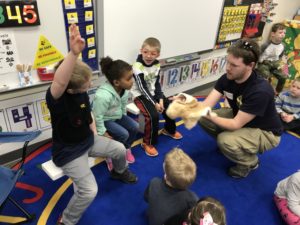 Although the kids were great with their animal facts and really enjoyed touching the pelts.  At age 5, their attention span is still pretty short.  About 22 minutes to be exact. My presentation was planned to wrap up at about the 30-minute mark, but once the natives started getting restless I knew it was time to end. We finished the lesson with the kids sharing one thing they learned about Michigan animals. 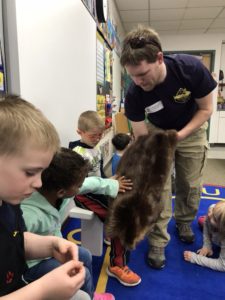 A visit to the neighboring classroom went about the same as the first class and we were able to distribute TRACKS magazine to both groups of students.

After surviving a morning being mauled by these tiny tots, I was reminded of how special early elementary school teachers are, and why I try to do most of my programming for the nine and older age groups.