On November 19, several dozen people attended a public meeting at Treetops in Gaylord to learn more about a recently released report from a scientific advisory panel, which was asked to take a look at opportunities around commercial scale net-pen aquaculture in the Great Lakes.

MUCC staff and members, along with Trout Unlimited, Michigan Steelhead and Salmon Fishermen’s Association, Hammond Bay Anglers, Saginaw Field and Stream, Michigan Environmental Council, Tip of the Mitt Watershed Council, the Michigan Charter Boat Association, and several other organizations, were there to represent our members’ concerns related to aquaculture facilities in the Great Lakes. We have also recorded and archived the video of the proceedings here. 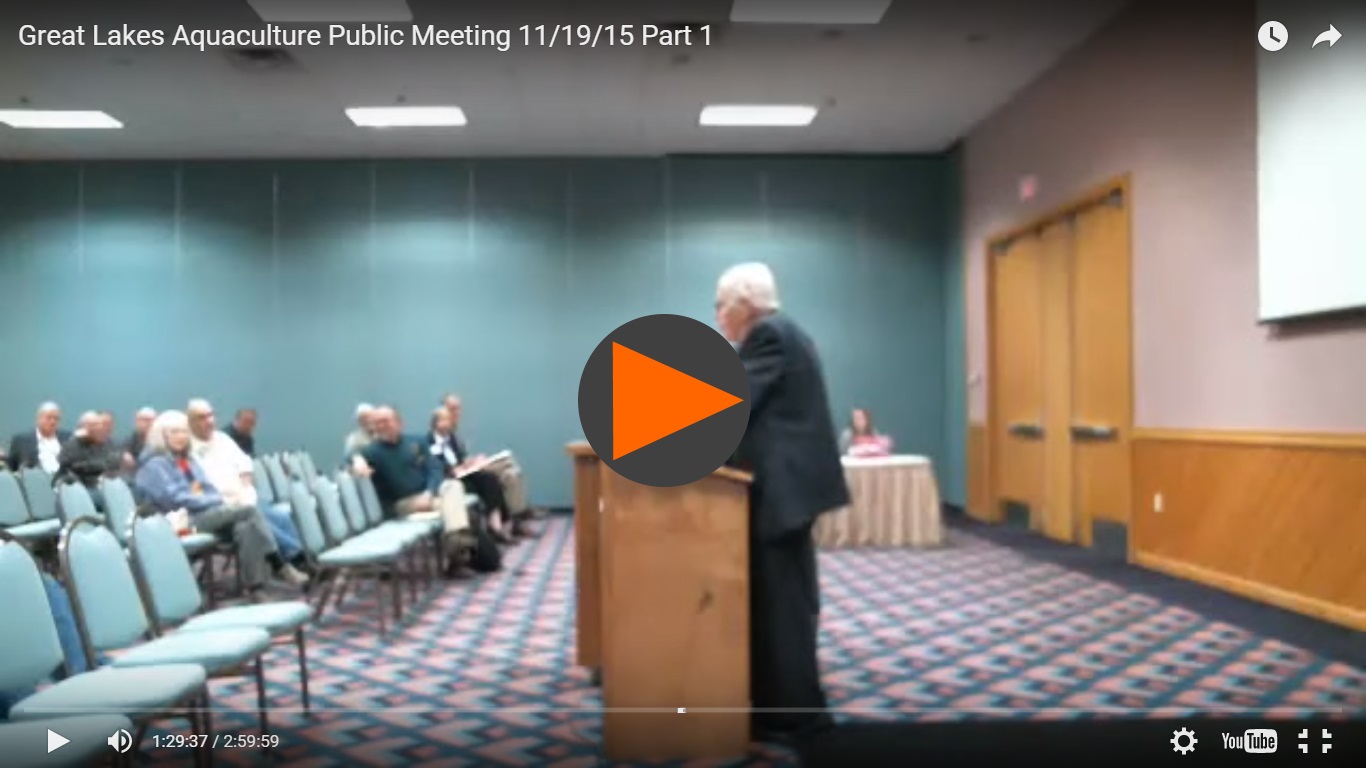 Commercial net-pen aquaculture is the practice of raising fish in an underwater net (or solid structure cage) that serves as a pen. Two companies last year approached the state of Michigan with proposals to raise rainbow trout in net-pens in lakes Huron and Michigan. The Michigan Departments of Agriculture and Rural Development, Natural Resources, and Environmental Quality called for a thorough review of the science, regulation and economics of commercial net-pen aquaculture. Five resulting reports have been completed and posted online.

The five reviews – completed with help from an independent aquaculture science advisory panel, the Small Business Development Center and Michigan State University – are available at www.michigan.gov/aquaculture. They include one science-based report exploring fish health and water quality; one report looking at applicable regulations, rules, jurisdictions and agreements governing such operations; and three separate evaluations of the potential economic impact of commercial net-pen aquaculture in the Great Lakes. See the links to the full reports below.

MUCC’s members reviewed the pros and cons of expanding aquaculture in the Great Lakes this summer at our Annual Convention and the resulting resolution stated that MUCC should oppose any significant expansion of cage culture or flow-through aquaculture on the public waters of the state. The reports by the science panel state that there exists no technology that can adequately capture and remove the effluent from a commercial net pen to protect Great Lakes water quality, not to mention the concerns with escapement or disease of these farmed rainbow trout impacting our existing fisheries populations.

The report suggests instead the old adage, “the solution to pollution is dilution”, which conservationists have fought against since before the Clean Water Act was adopted in the 1970s. Dr. Howard Tanner, former DNR Director and Fisheries Division Chief and the architect of the DNR’s plan to stock salmon in the Great Lakes, said “[the report] leaves out the fact that 30 million people drink from these Lakes…The people of this state have led the Great Lakes states in reducing phosphorous…We the People lead our government and we also happen to be the stewards of the Great Lakes. We have the most to gain and the most to lose.”

And he says a lot more than that. Jump ahead to watch Dr. Howard Tanner’s comments here:

It was telling that nearly 80 percent of the people attending this meeting to provide input were concerned anglers and environmentalists. The only individuals speaking in support included people employed in the aquaculture industry, farming industry, and economic development and product development interests.

You can view the proceedings of the public meeting for yourself here:

Those unable to attend the Nov. 19 meeting can provide written comments via email at DNR-Net-Pen-Comments@michigan.gov or via regular mail at:

Comments will be accepted through Dec. 4, 2015. All submitted comments will be made publicly available following the close of the comment/review period.