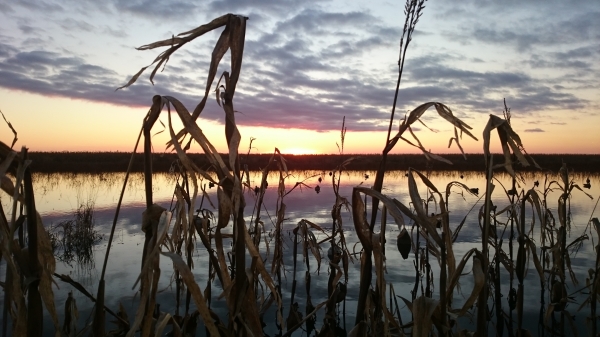 With the main portion of Michigan’s waterfowl season behind us, I thought I would share a bit of my experience this year. I seem to spend a great deal of my personal time taking new people out into the field with me. As this is only my 4th season as an avid waterfowler and I enjoy learning new areas with new people, this can sometimes turn into the blind leading the blind.

From a numbers perspective, I had my best season so far.   I was able to get out into the fields, marshes and big waters of our state to chase ducks and geese about 40 times this year.  On these trips, I was able to add 10 ducks and 5 geese to my freezer.  I took nine new hunters afield with me and even convinced four of them to come out at least a second time. I also have a camera full of sunrise and sunset pictures. 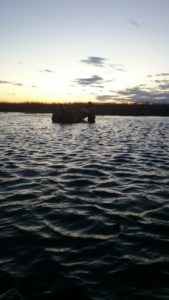 For this blog, I am going to talk about a couple of the newer hunters I spent time with this season.  The first new hunter I am going to talk about is Nick Green.  Nick is our Magazine Editor here at MUCC. Until about three months ago he would have told you fly-fishing and grouse hunting with his dog were his biggest passions in life.  However, after listening to me ramble about duck hunting all summer he let me talk him into giving it a shot.

I took him out chasing wood ducks in October, hunting from a pontoon blind on Saginaw Bay in November and in December; you could have found us breaking the ice in the marshes near Lansing. This season Nick shot his first goose, had some luck with divers on the bay, and shot a beautiful drake mallard with another friend that is currently at the taxidermist. With his first season behind him and roughly 15 trips into the marsh under his belt, Nick is officially hooked on duck hunting.

With apologies to his future wife Emily for introducing him to arguably one of the most expensive outdoor hobbies (he bought a duck boat today), I am happy to have hooked another person on duck hunting. For his first year, it felt good to be able to connect and share some of Nick’s early successes.

The second friend I spent a decent amount of time in the blind with this year was Bill Hielscher.  Unfortunately, for Bill, I was not able to get him on the birds this year.  I have known Bill for a few years and he has dabbled as a duck hunter for the last couple years.  Having five kids under the age of nine years old limits his ability to get into the marsh.  Bill caught the duck-hunting bug late last season and this year promised himself he was going to hit it hard.  I hunted with Bill on several days this year.  Many of those days included less than ideal conditions.  We hunted twice in all day soakers mixed with thunderstorms and a couple bluebird days where not even a seagull was to be spotted on Lake St. Clair.

Throughout several frustrating, zero bird days and some days with birds and poor shooting, Bill became more and more determined to continue learning.  He soaked up the things I was teaching him like a sponge.  He stepped up his scouting and started going to one of the Wetland Wonders locations and talking to the techs and biologists about learning the local areas. By the end of the season, Bill was at least getting to places where birds were. However, Mother Nature just would not cooperate.  Bill and I hunted together twice the last two weeks of the season.  I took a mallard one day and on the second day with Nick along, we did not see a single bird (Nick thinks I am a Jinx). 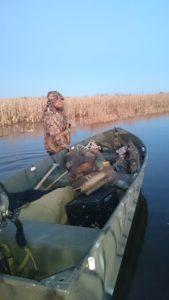 Although I was unsuccessful in helping Bill bag a bird this year, I definitely appreciated the vigor in which he tried.  His outlook of using every trip as a learning opportunity and his dedication to leaving areas better than when he arrived, is something I would encourage more sportsmen and women to adopt. I am confident that Bill will bag a bird next season, his stick with it approach is something to be admired.

If you are a current hunter, angler, trapper or conservationist, the importance of taking new people out into the field with you increases with every year.  Instilling in them the safe and ethical way to enjoy our outdoor heritage is vital if we want our sports to continue. Taking youth out into the field is a good place to start.  However, taking someone in the 24-40 age group out has a more immediate impact.  I challenge you to find a “millennial” and get them outside with you.  You may find a hunting partner for many years to come. In addition, a 29-year-old might be willing to carry and retrieve decoys from knee-deep mud for a few tidbits of long-held duck hunting knowledge!