On Tuesday evening, January 12, the DNR had a town hall meeting about the most recent CWD cases in the Dewitt and Watertown townships. Steve Schmitt (heads up the disease lab), and Chad Stewart (deer specialist) presented on CWD and where the Wildlife Division is to-date.

DNR has been tested over 34,000 deer for CWD around the state since 1998. They were all found negative, other than one positive captive deer in 2008 and the five that came back positive in 2015. In addition, they have also tested 1,600 elk and 70 moose – all negative. Of the recent cases of CWD, we don’t know where the disease came from to cause these deer to become ill, but we do know that the first deer was contaminated in or before 2013.

CWD is caused by prions, or mutant proteins, that multiply, accumulate, and kill nerve cells. As these cells die, they create holes in the brain, leading to certain death of the infected cervid. It takes at least 1.5 years for the animal to show symptoms, yet while infected, it spreads the prions around. Once it begins to show symptoms, it only has a few months to live. The typical symptoms of an advanced case of CWD can be simplified as a skinny deer you can walk up to.

The disease is transmitted three main ways: 1) Directly; animal to animal contact, 2) Indirectly; contact with bodily fluid and waste, and 3) Environmental contamination; the prion has been found in soil and plants growing out of contaminated soils.

The sample goal for the original nine township CWD zone is 3-4,000 deer. So far they have tested 2,500 deer. They would like to collected at least 500 more samples to provide good confidence intervals for assessing the spread of CWD in this area.

200 landowners in the Core CWD Zone have filled 320 deer with disease permits. If you are a landowner with 5 acres or more within the core zone, as well as Watertown Township, you can call the Disease Lab to request disease control permits: 517-336-5033. They can be used through March, and have liberal weapon regulations. For more details click here.

If you live in the Core CWD Zone, please consider getting your hands on some disease permits to help DNR reach the goal of testing at least 3,000 deer. These numbers are really important to help gauge what is going on here, and provide quality data to help the Department make recommendations for managing this disease. 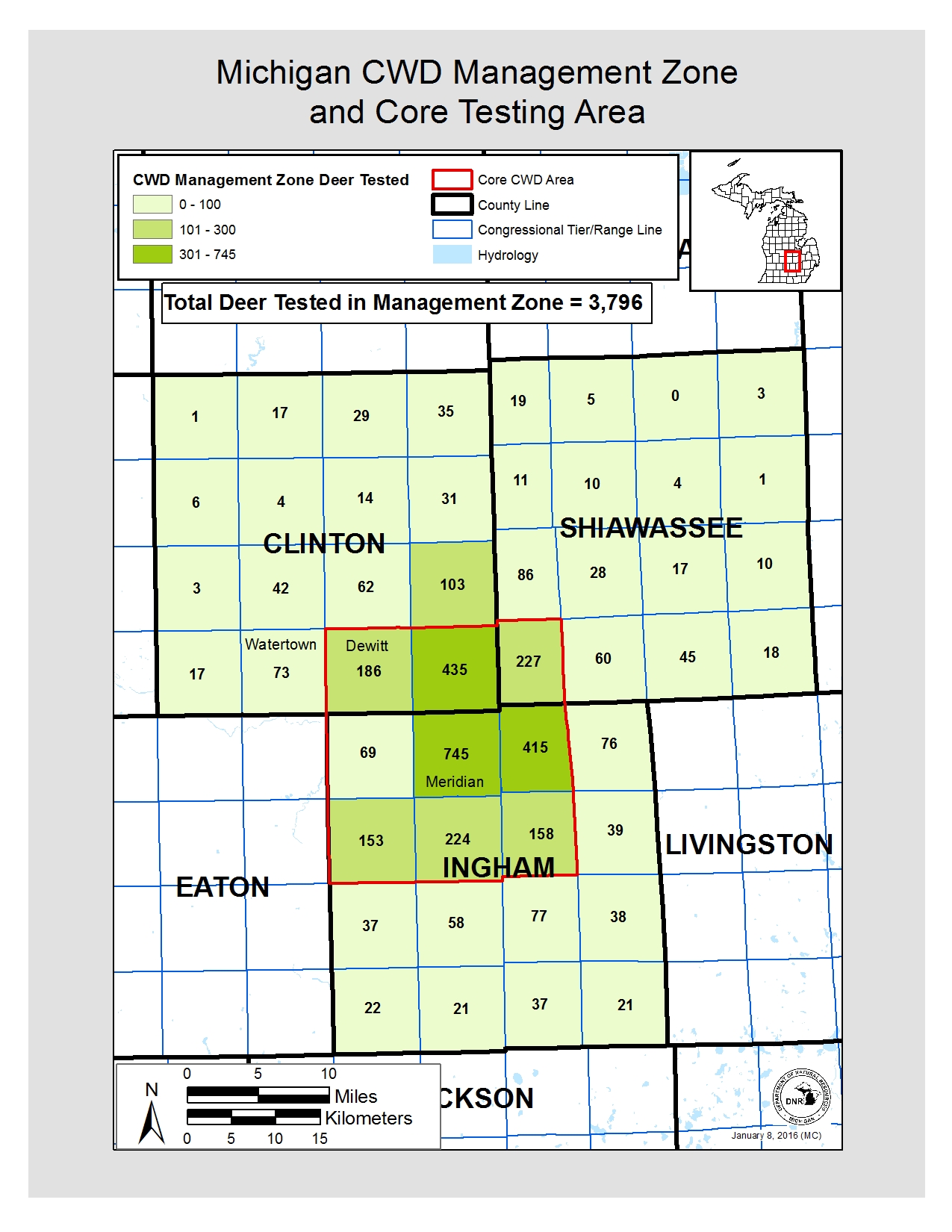 If you live in Ionia or Eaton counties, keep an eye out for regulations changes (bait ban) for this coming fall. Also, if you are near Watertown Township, watch for the expanded boundaries of the Core CWD Zone.

CWD is a nasty disease. As a deer hunter and a resident within the Core CWD Zone, I know this sucks. I breaks my heart to see the Cooperatives that are now in the middle of this fight against CWD here in Michigan. If you are in the “hot zone,” make sure you understand the disease and the risks so you can make informed management decisions. If you live outside of the CWD area, still do your part by submitting your deer for testing. And just as importantly, be supportive and uplifting of the folks who are living the nightmare of having to figure out what it looks like to tackle a disease like CWD full force.

Finally, the wise phrase, united we stand, divided we fall, couldn’t be more true in this fight against CWD. As hunters, managers, and wildlife fanatics, we have to be unified against this disease. This is not some plot of a governmental agency, or some other petty thing. This is a disease that has massive potential repercussions down the road.

Be informed. Be aware. Be ready. Let’s fight!