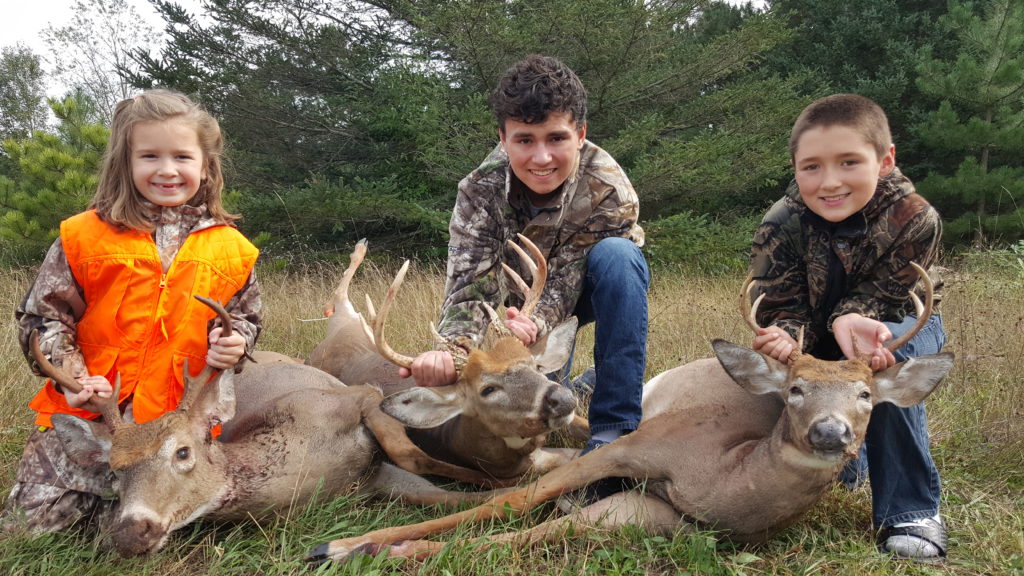 What a beautiful weekend for the youth weekend! Crisp cool air, calm, practically perfect in every way. Congratulations to all the successful young hunters!! There is something special about seeing the looks of accomplished youth who got their first deer. A first hunt with a successful kill becomes one of those life memories we don’t forget.

I got my first deer when I was a senior in college. John Knevel, an avid deer hunter, QDMA member and cooperative leader, was on the deer advisory team when the DNR was writing a deer management plan for the state. When he found out I had never been hunting, he immediately invited me to come out and bring a friend. Immediately I thought of my good friend Jamie, who was also an avid hunter. Like many of the kids whose pictures have been filling Facebook, Jamie grew up hunting and had a deep passion for being in the woods, watching deer, and used a bow as her weapon of choice. I never understood why she enjoyed hunting so much, until that one fateful morning.

I remember waking up ungodly early, stumbling out of my dorm, and meeting Jamie at my car. As we drove to John’s house, Jamie was giddy with excitement, and the sheer thought of me getting my first deer. We pulled up John’s driveway, still completely dark, we grouped up and hopped into his quad, and headed toward the deer blind. As we climbed into the blind, it was still too dark to see much, and I still couldn’t believe I had gotten up this early for what I had no idea would become such a memorable and accomplished morning.

About 10 minutes after daylight, a doe and a young deer came out and stood just below my blind. John quietly whispered that I could take the larger deer on the right when I was ready. Long story short, I think I made every rookie mistake in the book, and the deer walked away. Lucky for me, the property is very well managed, and the area has a lot of deer. Twenty minutes later, a couple more deer came into the field. John helped me pick out which one I was going to shoot, I looked down the scope and centered the cross-hares, took a deep breath, and pulled the trigger.

I had never shot inside a blind before, nor without ear protection on. The shot scared me more than anything, so I sat in shock of what had happened. The first thing I remember is Jamie repetitively hitting me declaring loudly that I had hit the deer. I was shaking like a fall leaf, and had not yet connected what had happened. After a few minutes, we got out of the blind, and found some blood.

I learned a lot about tracking deer that day, and with the help of John’s son, Dan (a new cooperative leader himself) came and helped track as well. After a while, we finally came up on the downed deer. I could officially say I had downed my first doe. Immediately I was overcome with this strange sense of accomplishment I had never experienced before. I had gone out into the woods and killed my own meat.

A few weeks later when I got the meat back from the processor, my teammates and I made some venison chili and celebrated that first hunt. I know that I will continue to have many memorable hunting memories. Since then I have had my first turkey and pheasant hunts, and many quiet hours in the woods in my ladder stand, but the memory of that first kill has a special place in my mind.

Thank you John, Dan, and Jamie for that first hunting experience. And thank you to all the parents, grandparents, and mentors out there who are able to provide those memories to the youth of today. Without you, we risk losing the hunting heritage and memories we all cherish. Celebrate the accomplishments and please know, you are truly making a special mark on the individuals you introduce to hunting.

Best of luck this coming season!

Special thanks to Southern Mecosta Whitetail Management Association and East Olive Cooperatives for sharing their youth hunt pictures from this past weekend.