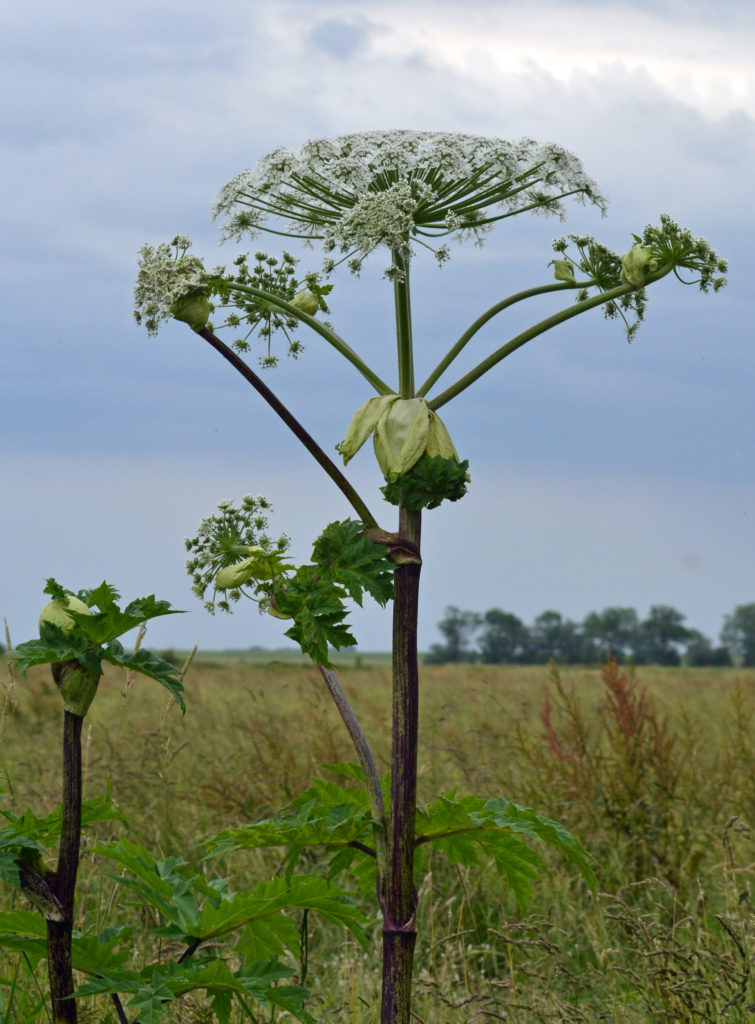 Giant hogweed (Heracleum mantegazzianum) is one of the nastiest invasives around. Giant hogweed is originally from Asian, and was introduced as an ornamental. Hogweed is also invasive in Canada and part of Europe. It is spread by seed, and can easily crowd out native plants and takeover complete areas. When flowering, giant hogweed can reach 10-15 feet, hence the title of giant. The large two to four inch, hollow stems have reddish-purple raised bumps and stiff hairs and the leaves are up to five feet in diameter. Flowers are white, and grow in umbrella-like clusters up to two and a half feet in diameter. Its size isn’t the nasty part though, coming in contact with hogweed causes severe skin irritation to the point of blisters.

In the US it is most commonly found in New England, mid-Atlantic, and and the northwest regions. Even though its widespread on the internet and social media these days, hogweed is rare in Michigan, having been found in Calhoun County near Battle Creek. But it never hurts to be on the lookout because of its potential harm to humans and animals.

Given its giant size, hogweed also takes up a lot of resources from other plants. Hogweed is known for causing soil erosion when it dies back for winter. The plant makes animals who come come in contact with or ingest any part of the plant hypersensitive to light, causing a reaction similar to sun blisters and severe sunburn. Animals cannot fully digest the plant so it burns the tissue all the way through the digestive tract.

Like all other invasives, prevention in key. First off, planting hogweed or its seeds is illegal. If you suspect that soil contains hogweed seeds do not move the soil, it will spread hogweed to where the soil is moved. If you are involved in hogweed removal, remove the plant before the seeds are popping—this prevents possible seed drop while removing the invasive. There are four removal methods for hogweed, as well as the use of herbicides. Herbicides that are found on the shelf are not generally strong enough to hogweed, so a commercial pesticide applicator will have to spray hogweed. Before trying to manually remove giant hogweed, first make sure you are covered from head to toe to avoid a reaction.

The first method of removal is most effective in small scale invasions, dig down 6-10 inches below the soil, and using a shovel or other sharp edge, cut the main root. The removed part of the plant should either be left out to dry or bagged and thrown away. This may have to be done multiple times during the growing season, multiple years in a row. Putting an herbicide on the root where it is cut can prevent the hogweed from growing back.

The second method of removal is slightly easier, but timing is more of an issue. Before the flowers produce seeds, cut the flower spike off the plant and place it in a garbage bag. After the bag is securely closed, leave the bag in the sun for at least two weeks so the process of solarization can be completed. Solarization essentially cooks the seeds until they are no longer viable, after the solarization period the bags can be disposed of with the rest of your garbage. Removing the flowers prevents re-seeding the next year, and hopefully stops the plants come from back, or at least thinning the invasion for the next year.

The final method is known as “cut and cover”. First cut the plants down to the ground, cover the area with either black plastic or landscape fabric, and cover with mulch. The following year make sure there are no seedlings poking through the plastic. After a few years of being covered, the plastic and mulch can be removed and the area can be replanted.